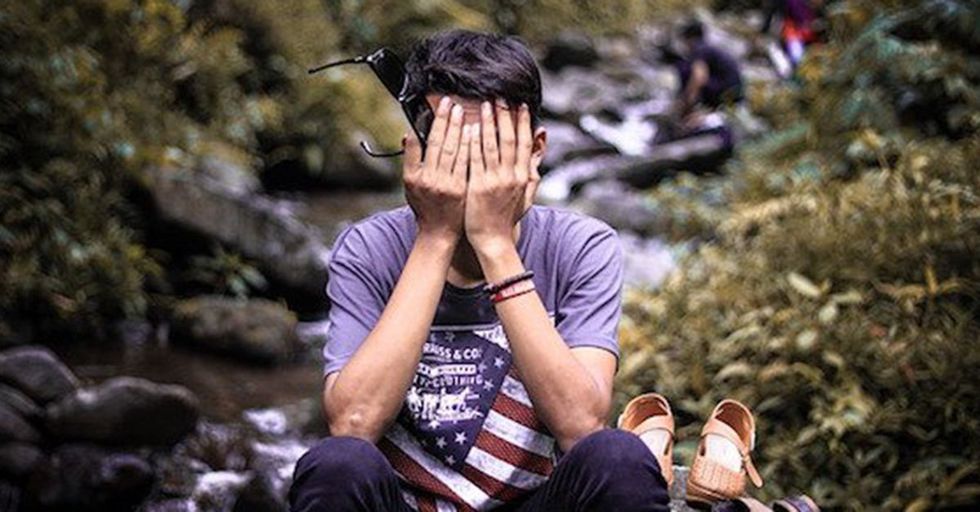 15 People Who Are So Dumb You Just Can't Look Away

Have you ever heard someone say something so obviously wrong or clueless that you can't BELIEVE they made it this far in life without figuring it out?

Chances are, you probably have. Sometimes, it might be an adult who doesn't know how may states are in the U.S.A. And the worst part isn't that they're wrong, but that they're SURE they're right. Well, Reddit has assembled a pretty impressive (depressive?) list of people's accounts with truly mind-numbing stupidity. Do you have any stories that could rival or beat these?

I was at a small social at my parents house and mentioned something about the National Space Center in Leicester, UK. A girl pipes up and says: “oh I love taking my son there, he loves it, I just find it amusing because I don’t believe in space." I looked at her dumbfounded and asked if she meant she didn’t believe in investing money in space exploration. No, she did not believe in space. She simply did not believe that anything existed above the sky, that pictures and videos were all fake and that all space agencies and anyone who claimed to have been to space was lying. The other girls in the group started nodding in agreement saying things like “Now that you mention it, I’ve never really seen space". I just went home. – losing_mike

Freshman year of college I’m in a math class and we had some random group project to do. A girl in my group informed us she wouldn’t be at the next meeting as she was going to have eye surgery. I asked her why and she said “I have genital cataracts" and I said “you mean congenital?" and she gave me an confused look and everyone backed her up that she really did mean genital and not congenital. Even after I Google it and show everyone the difference between the two words they proceeded to tell me how you can’t believe everything you read on the Internet. I was dumbfounded. – swanyMcswan

I used to work at Walmart as a cashier. During tax free weekend, the place was a mad house. The lines were long and the customers were non-stop. That being said, I can say that at least 80 percent of customers would point out to me, quite angrily, that their total was still including the tax. For example, if their purchase was $148.67 they would wonder why the tax of .67 was on there and why it wasn’t an even total, like $148.00 even. I had to repeatedly explain that’s not what tax is. – magicsparkleprincess

You can't vote on being a continent, FYI.

The morning after the EU referendum in the UK. People around me in work: “So, as we’re leaving Europe, does that mean there will be eight continents now?" – Anonymous

Uh, gas "may" be flammable, fellas.

I was hanging around with my friends. One of my friends had just gotten his very own moped. It needed a fill up, so they went to get the jerry can with gas in it. We were in the middle of an apartment building complex at the patio. My other friend wanted to see how much gas there was in the can, so he used his lighter to help him see. I immediately said “stop that! It will catch fire." He did not believe me so they decided to test it by pouring the gas on the ground and to try lighting it up. The person who was pouring the gas got scared and jumped once the gas caught on fire and dropped the jerry can. The rest of it splashed to the ground and formed a 10 meter (32 ft) tall fire spiral. – OderStercore

Sadly, lots of people would probably screw this one up...

How do TVs work, again?

I was a TA in high school for a regular High School, I think it was World History course. So not Honors, not “Academically Enriched", but not quite eating your own feces either. Anyways, get to class and the power is out so of course everyone is going nuts cause… its dark, I guess? So the teacher still wants to lecture and the kids all groan. That is until one yells out, “Let’s watch TV!" YAAAAAY!! Everyone starts chanting, “TV! TV! TV!" I’ll never forget the teacher’s face as he looked at me. His eyes filled with disappointment about the future of our country. Unable to realize that no electricity also meant no television. Sad. – neutronknows

Well you see....*breaks down sobbing*

First day of college, girl raises her hand and asks why there are two pacific oceans on the map. – Lentilson3517

There's nothing worse than you realize that MULTIPLE people share the same dumb thought.

I was at work and explaining to a co-worker how to put wrap on a cooking wrapping machine and I say “You have to pull it taut." And she just stopped and said “That isn’t how you use that word. You can’t teach a wrap." And my bosses come in and I had to convince them that taut was a word and they told me that I shouldn’t use big words like that all the time. Taut. – Shed412

Wow. This is some next-level stupidity!

My friend once couldn’t find his iPhone in his house, so he rang it from the landline. His iPhone rang, on the table in front of him, he picked it up and obviously, there was nobody on the other line. Screams upstairs to his parents, with a phone in each hand: “Who the fuck is ringing me?" I sat there face palming. – mmyers90

I once had an argument that rain was “new water" bestowed to us by the Earth. My friend truly believed that water did not recycle, and that consuming it meant that it never saw the Earth again. Also believed that anything flushed down a toilet or drained was burned and evaporated into nothingness. – PSFore

Here's why the two will never meet...

I had to explain that Halloween, in fact, can never be on Friday the 13th. – Llebanna

You would think workers would know how their wages and taxes work, but...no.

I once had 3 coworkers agree that I was a sucker for taking overtime (that amounted to, before taxes, almost doubling my income on a given day because of time-and-a-half for 3-5 hours) because “they take it all back in taxes". I tried to clarify and no, they believed it ALL got taken back in taxes. Like, 3 grown men believed that if I worked 4 extra hours in a day at $18 an hour on top of the 10 @ $12 an hour (or however the math worked), my year end income would stay the same because taxes. WHAT. – boxjohn

A girl I know once asked why anyone would donate blood. She said that you only got a certain amount for your entire life and giving it away didn’t make sense. – meximelt410