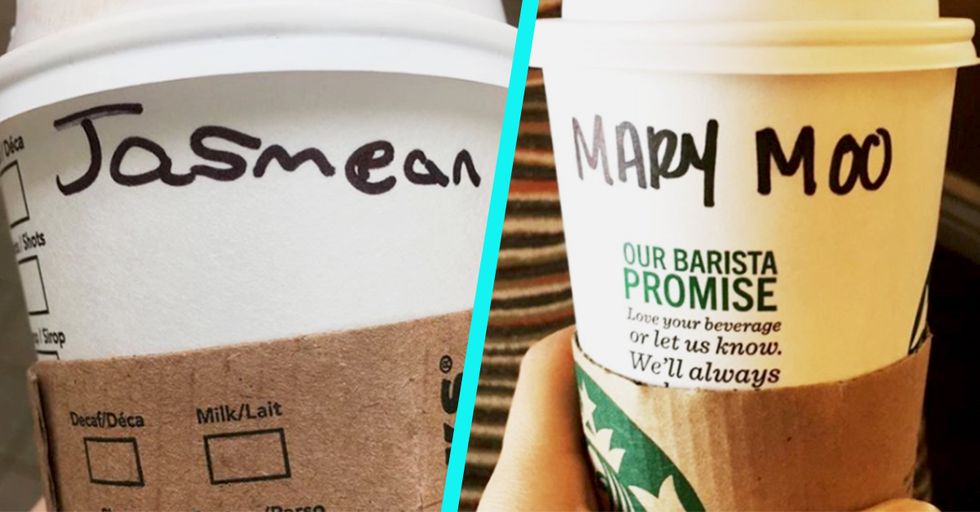 We've all been there: we look down at our Starbucks cup and realize something isn't quite right. Did the person who made my non-fat cappuccino really think Lucy was spelled Loosay? I get Lucie, even Luci would get a pass, but it seems like baristas often spell names so wrong they're doing it on purpose. Some people suspect this is actually Starbucks' evil plan: if they spell your name incredibly wrong, you're more likely to post a photo of your cup on social media and give them free advertising. Whether or not that's true, we may never know. What we do know is that Starbucks' employees are super good at messing up names. Here's a list of some of the funniest misspellings people have found on the back of their Starbucks' cups.

Sometimes the problem is what they write isn't even a name at all.

At least not that we've ever heard of. But who knows what the young people are naming their kids these days.

To be fair, the barista did follow directions on this one.

Doesn't everyone know a Carc?

Was this a true misspelling or a comment on her attitude?

After her coffee she's Jasnice.

This barista has amazing handwriting.

But probably needs to work on their listening skills. Mary Lou is a human, not a cow!

Starbucks is a family establishment.

They have to keep it wholesome, D*ck.

This one is technically spelled correctly.

If Justin was a girl and his name was Justine.

It's none of their business is she's single, okay? She happens to have a ferret named Noodle and they're doing fine!

Free extra syllables with every order.

They thought her name was so nice, it should be longer.

Not sure you want to drink that...

Pee could be a very unfortunate nickname for Pilar, though. They were just trying to be friendly!

This one is just funny.

Claire sounds nothing like Blay, which is also not a name.

Not only did this barista misspell Karen...

The customer's name was Corinne.

There's a whole lot of vowels going on at the end of this name.

Her name was Cynthia. Which doesn't seem that hard to spell, but who are we to judge?

Is she a person or a snack for horses?

Her name was Kay. So close.

There are a lot of different spelling of Caitlin.

Maybe this is the Old English version.

That's one way to spell Isaac?

If you've never spelled before.