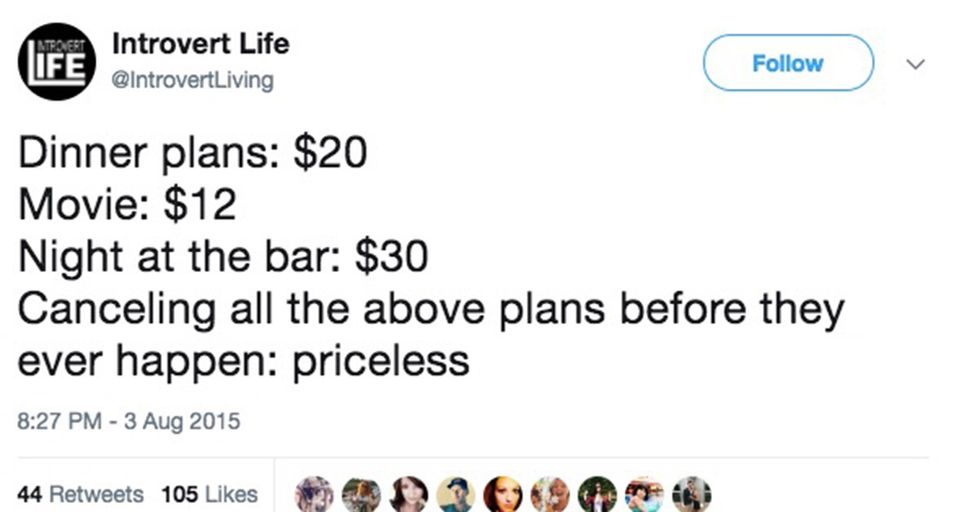 If you're a flake like me, you have to walk a careful line.

That's why when anybody asks me what I'm doing, I give them the old "I'm not sure!" Ambiguity is a flake's best friend.

Even if you don't have commitment issues, you can relate to this.

Present me is always making plans that future me is going to hate.

Some people even get pleasure out of flaking.

Tim's favorite high is canceling plans, which at least is harmless to his health?

For this woman, the best part of making plans is cancelling them.

But it's hard to argue with the idea. Never seeing people sounds pretty sweet.

Going out can end up costing a lot of money.

But canceling your plans and staying inside is absolutely free.

Though five spots might even be a bit long.

Sometimes when you're stuck doing something you just can't wait for it to be over.

The best part of any social event is the end, but especially awkward dates.

But even if you get married the commitment issues never go away.

It's "til death do us part", nothing in there says anything about phone bills!

The one thing I can commit to is Google Chrome browser tabs.

And I'm not alone here. I've had the same tabs open for days before. Chrome will always be there for you.

A lot of people have tried and given up on a sport throughout their lives.

But this guy saw it all the way through and got his black belt in the Partial Arts. More like Tae-Kwon-Don't, am I right?

It seems like literally everybody is watching Game of Thrones nowadays.

But if you're one of the three people like me that have never seen it, it's probably because who can commit to eight seasons of a show? I can barely decide what to wear in the morning.

But even flakes love Game of Thrones.

It's all perception, m'dear.

And it totally sounds like a Mitch Hedberg quote or something.

If you've ever experienced a snowstorm, you know you can be stuck inside somewhere for days on end.

Spending days inside of one place is a commitment a lot of us would be hard pressed to make, I think.

But through the thick and the thin, no matter what...

Your bed will always be there for you.