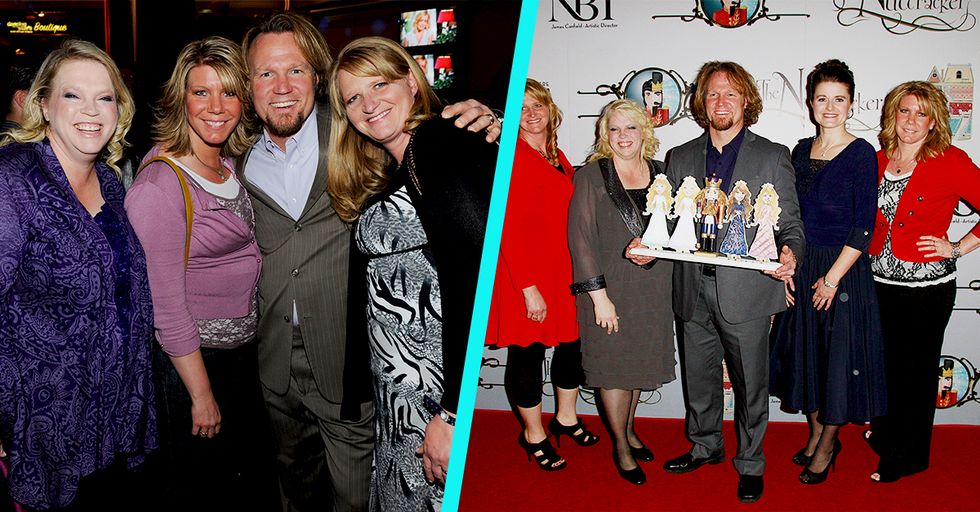 If you watch reality TV, you know that polygamist families exist. And they don’t mind letting the cameras put their plural families on blast all in the name of a fat paycheck.

From TLC’s long-running Sister Wives to its latest experiment, Seeking Sister Wife, here’s what reality TV has taught us about polygamy.

There is no such thing as legal polygamy in the U.S.

Kody Brown of Sister Wives can only be legally married to one wife at a time. He even divorced his first wife, Meri, in 2014 to legally wed Robyn, whose children he wanted to adopt. So where does this leave the other non-legal wives? Well, they’re in “spiritual unions" with Kody. Which provides them zero protection under the law. Good plan.

Mormons are not polygamists. But many polygamists consider themselves Mormon.

Get ready to be confused: Mainstream Mormons reject the polygamist lifestyle. But most polygamists claim to be Mormon. So what gives? The Fundamentalist Church of Latter Day Saints (FLDS) broke from the mainstream, continuing their polygamist practices long past the late 1800's ruling that declared them illegal. This obviously does not sit well with LDS members trying to escape the stereotype of having multiple wives. And it led to abuse of underage girls, as evidenced by FLDS leader Warren Jeffs, who was imprisoned for his crimes.

But many polygamist families have rejected the FLDS label too.

The Brown family claim to be fundamental Mormons who don’t subscribe to the abusive practices of underage marriage. They don’t come right out and spill the beans on what religious organization (if any) they belong to, although the NY Times once outed them as members of the most liberal polygamist sect, the Apostolic United Brethren. The Browns, however, have never confirmed this label.

Polygamists need to make a lot of money. They’ve got, like, a trillion mouths to feed.

Legend has it that Kody Brown is worth nearly a cool million these days – even after multiple bankruptcies and lawsuits. The Brown family also pulls in about $50k an episode from TLC, which goes a long way toward supporting 18 kids. Kody counts on his wives for their side hustles, like selling real estate. Or LuLaRoe. And damn, do those Sister Wives looooooove them some LuLaRoe.

This is a no brainer, and possibly the only thing I have in common with the Sister Wives. Give me an enormous cart, a Costco membership, and a debit card and I’ll show you the true meaning of hoarding. At least Kody’s brood has a 20+ person family to warrant bulk buying, whereas I just really love buying pallets of Coke Zero and 84 string cheese sticks at a time.

Your rank order as a wife in a plural marriage doesn’t mean jack squat.

In ancient polygamist cultures, having the status of “first wife" meant you ruled the roost and could lord your power over every other hussy added to your husband’s harem. But like most of modern culture, newer is better now. First wives can even be divorced (as in the Browns’ case) to make room for legal unions with a more – ahem – updated model. Ouch.

In a polygamous family, you can marry your sister. By accident.

Wait – what? The children of polygamous unions are all considered siblings, whether half, full, or step. So when Kody’s father and one of his multiple wives’ mothers ALSO married each other, they suddenly became siblings “in the eyes of God." Which adds a whole new meaning to the term "Sister Wife." <shudder>

When finding a new wife, the entire polygamous family must “date" her.

As we’ve learned on Seeking Sister Wife, proposing to that special second, third, or fourth girlfriend isn’t just up to the dude. Nope. The newbie must be “courted" by everyone – I’m talking previous wives, children, and possibly even postal carriers/lawn service personnel/tax preparers. Think about the dating process like this: It’s The Bachelor meets Survivor meets Supermarket Sweep. In other words, it is almost as stressful as Bumble.

Please cover your arms, thanks.

But whatever you do - don’t wear the color red!

The Browns don’t seem to practice this little known and totally arbitrary tradition, but many FLDS members do. In 2008, controversial leader Warren Jeffs forbid his female followers from wearing red. The reason? It’s too “sensual." Interesting point, considering that Jeffs himself owned a red sports car – and was driving it when the Feds arrested him! Oops.

Some polygamists consume caffeine and alcohol.

While strict Mormons avoid any consumption of caffeine and alcohol, apparently the polygamous community is a mixed bag on the subject. Some polygamist compounds even have bars and coffee shops on them! WHAT? ARE THEIR ARMS UNCOVERED TOO? I am shooketh.

It pays to be a polygamist in Canada.

Literally, you will get paid for procreating in Canada. Similar to the U.S. child tax credits, Canada attaches a nice little sum (approx. $160/month) to each dependent in a household. One Canadian polygamist with 24 wives and 118 children can earn almost $45K a year! And yes, there is a man doing just this up north right now. Google that shit.

According to Joseph Smith’s original doctrine (which many mainstream Mormons have since rejected), a man must have three or more wives to attain a higher status in heaven. This may be why wife number one on shows like Seeking Sister Wife are so bizarrely on board with recruiting new women into their marriage. They’re just looking for better digs in the sky!

Utah isn’t the only place you can find polygamists.

Although there are a shit ton of them there. Some studies report upwards of 30,000 families practicing plural marriage in the state of Utah alone. But it seems Las Vegas might be the new hotbed of men who marry lots'a people! The Brown family moved there from Lehi, UT, seven years ago to escape their “oppressive" community. In return, Sin City has given them expanded opportunities in real estate and of course, TV exposure.

And it looks Las Vegas will be where the polygamists stay – at least the fancy reality TV ones.

In 2017, the Brown family appealed Utah’s polygamy ban at the Supreme Court level. But our nation’s highest court decided against even hearing the appeal. Their attitude was basically, Ain’t nobody got time fo’ dat. But if you’ve got time on Sunday nights, tune in to TLC for Sister Wife and Seeking Sister Wife. Consider it an educational experience.