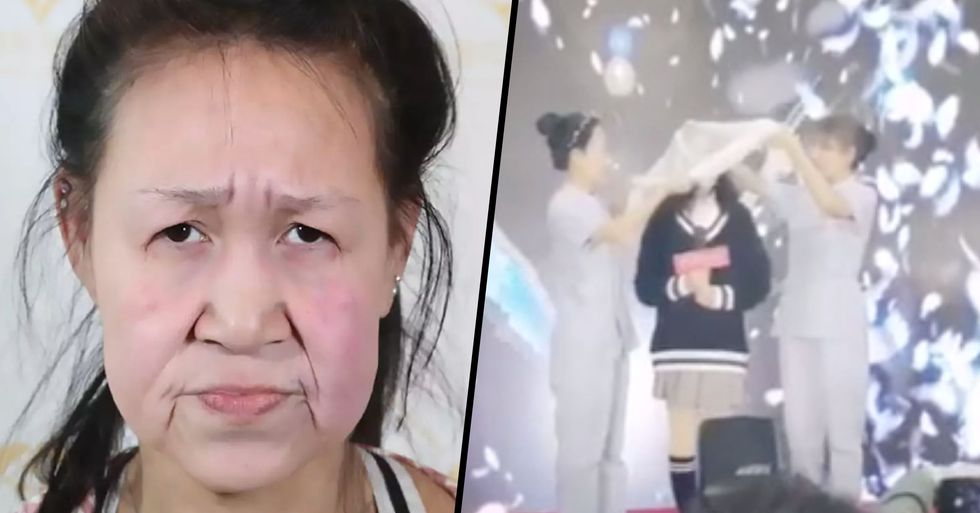 Plastic surgery comes with its risks, and it is up to the person having it to decide whether or not they want to take those risks in order to look the way that they want to look.

With plastic surgery being a bit of a trend right now, it seems that everyone has had some form of cosmetic surgery, whether that's discreet fillers in the cheek or a breast enlargement that'll give you double Ds in a mere few hours.

But with plastic surgery comes a lot of criticism, with many disagreeing that filling our bodies with silicone is acceptable. However, sometimes plastic surgery can be a great thing for people who suffer from disfigurements.

A 15-year-old girl has undergone life-changing surgery to improve the symptoms of premature aging. Keep scrolling to hear the full story...

It seems that everyone has had some form of cosmetic surgery nowadays...

Procedures such as botox and fillers can be used to achieve a natural and youthful complexion... when applied to the minimum.

Celebs have taken over the world of cosmetic surgery...

Who could forget the moment that Kylie Jenner first got lip fillers back in 2013 and attempted to deny it? She's now open and proud of her silicone lips and they have truly transformed her into a completely different person.

It's not just her lips, however...

Despite Jenner claiming to have only had lip fillers, experts have stated that she has clearly had work done to enlarge her breasts, hips, and backside - and it's safe to say that her impossible curves certainly suggest that this is true.

People have been known to overdo plastic surgery, and the results can be absolutely terrifying.

Donatella Versace is known for more than just her fashion empire...

The Versace business owner is known for her OTT botox and fillers that have left her face in a permanently swollen state. Donatella has never spoken out about her surgery faux pas, but it's safe to say that she is always killing it.

Jocelyn Wildenstein is perhaps one of the most famous celebs for having extreme surgery...

The New York socialite began experimenting with surgery in 1997 and it has since been reported that she has spent approximately $4 million on cosmetic procedures. She has been nicknamed "Cat Woman" and "The Bride of Wildenstein" due to her dramatically stretched-out face and puffy features.

And not forgetting the Human Ken Doll...

Roddy Alves has had pretty much every cosmetic procedure there is. That includes lip fillers, botox, pec and ab implants, liposuction, and even rib removal, all of which were designed to make Roddy look as plastic and as "perfect" as possible.

She has claimed that cosmetic surgery is the only way that she can be her "true self..."

Despite her appearance looking slightly alarming to us, Roddy has insisted that she's happier than ever with his plastic and non-human look.

Even the smallest of cosmetic procedures hold their risks...

Lip fillers are one of the most popular cosmetic procedures and people seem to be obsessed with having plump and voluptuous lips.

Whilst plump and luscious lips seem desirable, there are many people out there who have allowed a little bit too much filler to be injected into their lips, leaving them with "duck lips." But sometimes plastic surgery can be a positive. Scroll to the end to see how plastic surgery helped one girl get rid of her 'grandma' appearance.

Plastic surgery is becoming increasingly more accessible. Even with the rise in plastic surgery, myths and stereotypes still surround the topic.

Should you believe them?

Here are the 4 surgery myths you should stop believing.

Getting plastic surgery is purely about looks.

While it's easy to say certain enhancements, such as breast augmentation, facelifts or the classic tummy tuck are purely for vanity, there are many other reasons people get surgery. People can also get surgery to fix birth defects or post-cancer breast reconstruction.  Often plastic surgery is used to help people feel less self-conscious.

Plastic surgery is only for women.

Women are traditionally the ones to get plastic surgery, however, there has been a rise in men going under the knife. And as plastic surgery is all about feeling good in your own skin, it definitely shouldn't just be targeted towards women.

Plastic surgery is only for the rich and famous.

It's likely that you know at least one person that has undergone a cosmetic procedure in their life, as plastic surgery is a lot more accessible than it used to be. It used to be considered a luxury, but with new treatment options available to the general public, it's a lot less shocking to find out someone you know has had something done.

Plastic surgery is the easiest way to lose weight.

It's a common misconception that liposuction and body contouring procedures are a quick and easy method of weight loss. While the procedure does remove fat, it can't replace the more effective method of diet and exercise.

What are the positive effects of plastic surgery?

Here are some of the ways plastic surgery can have a positive impact on peoples' lives.

People who undergo plastic surgery usually have an improved sense of self-confidence.

Looking and feeling better about yourself and the way your body looks can have a positive impact on the quality of your life. Making people more outgoing and willing to try new things.

People who feel less self-conscious about the way they look tend to have a better outlook on life which provides a boost of confidence, and an increased zest for life.

As individuals take full advantage of their improved look and focus on looking and feeling their best after the surgery, it ultimately makes people feel a lot happier.

Surgery can help people with disfigurements.

One girl from China decided to undergo plastic surgery to improve the quality of her life.

Xiao Feng was born with Hutchinson-Gilford Progeria syndrome which has caused her to age prematurely. Scroll to the end to see her big reveal.

There is no cure.

Although there is currently no cure for the disease, Feng has had the help of a Chinese philanthropist to fund the plastic surgery to allow her to feel like a normal teenager.

The results are astonishing.

The teenager was forced to quit school due to bullying which resulted in her writing to Guo Mingyi, 61, asking for help. The Sunline Plastic Surgery Hospital announced it would perform the surgery and discounted 70 percent of the $72,524 bill. Guo paid the remaining 30 percent.  It was a success.

Although it might seem like the answer to all your problems, plastic surgery shouldn't always be the answer. Most of the time, the things you want to fix are the things that make you unique. Embrace your differences!