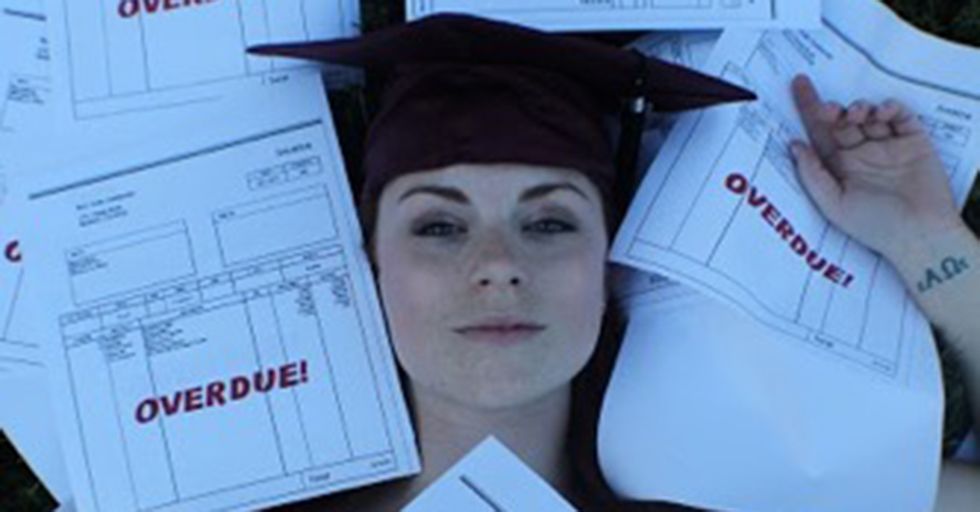 16 Bizarre Graduation Photos That Range From 'Awesome' To 'Awful

Graduation marks a pretty important milestone in a young adult's life, so it makes sense that they'd want to commemorate the occasion with photos. But THESE photos? We're not so sure this is the best way to honor your hard work. Or maybe it is. You be the judge.

Yes, you're very baller for graduating. You and about three million other kids. Now please sit down. Good luck on the job hunt.

Oh, well. They'll learn about how it's important not to burn bridges soon enough.

Looks like the dad's happier about graduation than the kid is. The dog just looks confused and uncomfortable.

There's a pretty obvious metaphor here, but I don't want to be the person who spells it out.

Welcome to the real world.

You're in for lots of disappointment, but put on a brave face, and use the skills that got you here and you just might make it through the whole experience.

Congrats on the loans!

It's gotta be a little bittersweet knowing that you're entering the working world with the most debt you've ever carried in your life.

Enjoy it while it lasts.

That feeling that you're floating on air goes away soon enough and you're left feeling wet and helpless.

I would watch this show. Maybe Cinemax would pick it up. The characters' phones would keep ringing with courtesy calls from Fannie Mae.

How old is this guy?

With that much gray on him, I'm thinking he might actually be 25% wolf. Congratulations on graduating so you can provide for your pack.

Yup. That's a metaphor, too.

Just keep smiling. It's one of the most important things you can do in the face of adversity or even just dumb bad luck.

I still can't tell if that's part of his hat or not.

Shadow? Hat? Shadow? Hat. It's like a less interesting redux of "the dress." Anyway, congrats on making it through sorcery school, kiddo.

Clearly, this photoshoot was inspired by both American Beauty and crushing student debt. It's one of the better, funnier ones I've seen in this batch.

They grow up so fast.

Then they stop growing up and get more immature in college. Then just sorta plateau in their mid-20s. Then they start to grow up again around 30. They're sort of, kind of, adults by 40.

The spiraling costs of education.

At least she got out with her arm. I guess that means the school cut her some sort of discount. Nice shoes, btw.

Finally, someone who appears to be empowered and emboldened by their graduation. They said majoring in "Daredevil" wouldn't pay off. They were wrong.

The children are our future.

At least he had the foresight to put some holes in his cap for the ceremony. That shows proactive problem-solving. So...there's that at least.