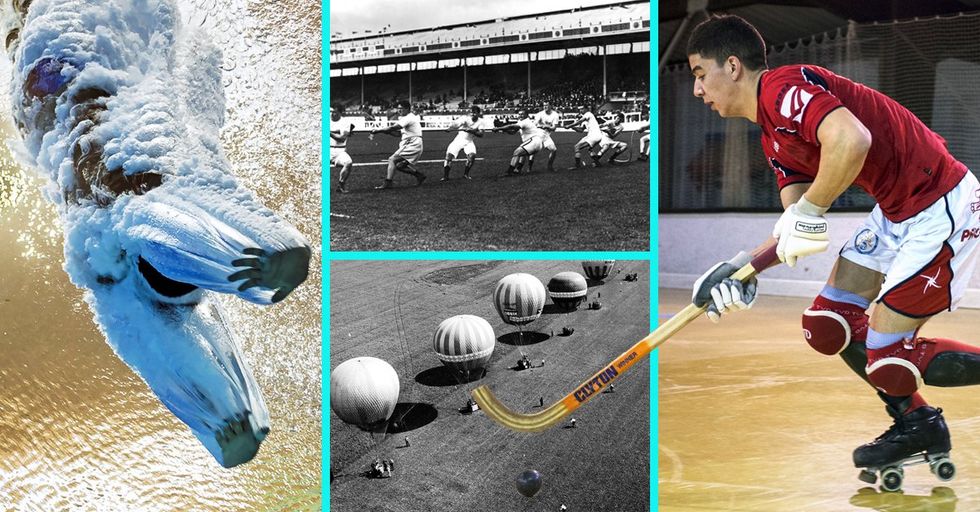 16 Bizarre Sports That Actually Used to Be in the Olympics

The 2018 Winter Olympic Games are about to get underway in PyeongChang, South Korea! The global sports event if a worldwide phenomenon that truly has something for everybody. Whether you're into ice hockey or figure skating, there will be an Olympics event you will enjoy watching.

In fact, there have been all sorts of varied events throughout the vast history of the Olympic Games, and to be totally honest, some of them are just really strange. These are the weirdest sports that have actually been official Olympic events at some point in history.

For the Paris Olympics in 1900, people thought it would be a good idea to shoot live pigeons. Yeah. Unfortunately, nearly 300 birds were killed. Belgian participant Leon de Lunden won the event by killing 21 pigeons. Needless to say, the event did not return the next Olympics. (Live pigeons were replaced with clay ones.)

If you think that the words "solo" and "synchronized" don't quite go together, well, you'd be in the same boat as I am. But it's true; solo synchronized swimming was an Olympic sport from 1984 to 1992. What is the performer synchronizing to if she's going at it alone? you might ask. That's a great question. According to the sport's organizers, she's obviously in sync with the music. Duh.

That's right — the capstone event of every middle school field day was actually once an Olympic sport. It was featured in five Olympic Games from 1900 to 1920. Team USA won gold in 1904 at the games in St. Louis.

In case you thought we were out of the woods with embarrassing gym class activities from your youth, here's rope climbing, the official Olympic sport. The event debuted in 1896. Athletes had to climb the rope as fast as possible while a group of their peers sat at the bottom and watched and judged them harshly. OK that second part wasn't an official part of the sport, but it probably happened because rope climbing is the worst.

The only year this was included in the Olympics was 1900. (Apparently, they went full crazy that year for the games!) Paris' River Seine hosted the event. It was a 200-meter obstacle course for swimmers full of poles and boats they had to swim over and under and through. Guys, the crazy is just heating up...

It probably wasn't as barbaric as it's pictured here, but yes, swinging a club was once an Olympic sport. It debuted in 1904 and here's what it entailed: The athlete stood and held a club in each hand. Then they did a routine with them, twirling them around and stuff. And that's it. That was the event. The more complicated the routine, the more points the person received. Club swinging was only in two Olympic Games.

The '80s and '90s were once alive and well in the Olympic Games when roller hockey was an official event. It debuted in 1992 at the Barcelona Games and it's literally ice hockey but with roller skates instead. That year was the only time roller hockey appeared in the Olympics, but it lives on in our hearts forever. #RocketPower

Equestrian events have long been part of the Olympic Games, but in 1900 in Paris, they were smoking some extra long cigarettes, it seems, because they thought it'd be a good idea to combine track and field with horses and give horses their very own long jump event. That's the only year that event took place.

In 1900, horses had all their very own track and field events. In addition to the long jump, they competed in the high jump.
The most outrageous thing about this event is that two competitors actually tied for first. France's Dominique Garderes, who rode Canela tied with Italy's Gian Giorgio Trissino, who was riding Oreste. Both of their horses leaped 1.85 meters into the air over a horizontal pole.

This event is something we all probably did as kids in the pool during the summer. Plunging for distance literally meant diving into the water and gliding for as far as you could. It was only in the Olympics in 1904, so the reigning champion is still Team USA's William Dickey.

Everyone's favorite (??) lawn game was actually once an Olympic sport. That's right, folks.
It was Paris in 1900 again, and it's actually pretty important because it was the first event in which women participated in the Olympics. So that's pretty cool. What isn't cool is that it the sport was taken out of the Olympics because only one lonely person came to watch. How sad!

You guessed it: It was Paris. The year was 1900. The Olympic Games was a friggin' free-for-all.
In ballooning, hot air ballooners had to fly their giant balloons to a target and drop a weighted marker as close and they possibly could to said target. If it sounds dangerous and ill-advised, that's because it was. Now, on to tandem bicycles!

You may think this is ridiculous, but this was actually a pretty long-lived Olympic event, running from 1908 to 1972. 1972!!! Teams of two men raced 2,000 meters. Although the event was removed from the Olympic Games, it's still an event in the Paralympics.

You gotta watch this video. Glima is the "Icelandic sport of national folk wrestling" and it was in the Olympics until 1912. Both competitors have to stand straight up and they have to circle clockwise around each other. They both have to try to get their opponent's body, somewhere between the elbow and the knee, to touch the ground. It's truly a sight to behold.

Not that kind of motorboating. Get your mind out of the gutter! This was powerboat racing. 1908 was the only year it was an Olympic event — they decided that motorized sports weren't exactly in the Olympic spirit.

Yes, for real. For a good portion of the 20th century, poetry was an official Olympic event. Like, you could win a medal for your poem. The guy who revived the Olympics, Baron Pierre de Coubertin, really wanted "Greek-style arts contests" to live next to the athletic events of the Olympics. Medals were awarded for sports-themed poems. In fact, poetry wasn't the only art involved in the Olympics.
At one point in time, you could also win medals for architecture, literature, music, painting, and sculpture. These events were first included in the 1912 Summer Olympics in Stockholm, Sweden and were part of the Games until 1952. Now, there are still art exhibitions associated with the Games, but they are no longer official events. Too bad!