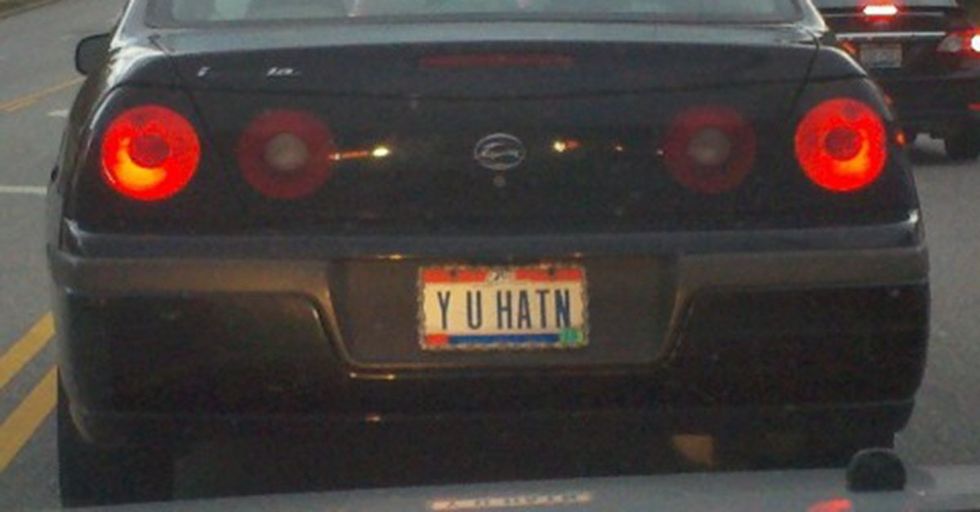 16 Custom License Plates That Are Nothing Short of Cringeworthy

It's possible that, at one time, custom license plates were a pretty cool thing. But nowadays, it seems like they're only reserved for loudmouths who are probably VERY insecure. Sometimes, they can still be clever, but not very frequently. However, we're not ones to judge. You can do that for yourself with this gallery.

Oh, man. What does that even mean on the back of a car? You tryin' to say you're cool and with it by using lingo from two decades ago? Ok, dude!

This seems to be very common.

"Not Poor" has popped up on lots of different plates, leading me to suggest that not only is that person actually not as rich as they pretend to be, but they are also just terrible human beings.

Yup. With my eyes.

Is that a question? Are you stating the obvious? This person must be very confident that there's not a blind person riding shotgun behind him or her.

Pretty phly, dude. You'd be a lot more convincing if you didn't have the plate attached to a Kia, which isn't a vehicle I associate with "skillz" of any sort, really.

You can figure this out.

Where is this person finding the time to drive with another activity attracting so much of his attention? What a multitasker!

This probably won't get you out of a ticket, btw. But there is a good chance this person is a TERRIBLE driver who needs a ready-made excuse for why they just cut you off.

Well, then. I guess that's...something.

Something awful, but still...something. I don't know what goes through a person's mind when they pick this, but I'm hoping it's a bad sense of humor and not a reflection of who they are.

Well, at least (and I'm really reaching here) this person understands that they're destroying the environment. I guess the bigger problem is that there's nothing they want to do about fixing that.

I like how this guy (I assume) has absolutely no standards. Just anyone over the 18 will garner his attention. You can be that he's getting pulled over as a precautionary measure during every amber alert.

In fact, I'm not thinking about you at all. You sound insecure, though. I think maybe you should consider working on your self-confidence.

Some people are insecure. Others crave attention, but are still insecure. In fact, that last one describes everyone with a vanity plate. But this one might sit atop them all.

I don't know why I expect to see like, a 14-year-old girl driving this car, but the license plate gave me a chuckle, which is more than I can say for almost every other one here.

I spend most of my life trying to avoid Internet comment sections. The last thing I want is to be subjected to their lingo while out in the real world. THAT'S why I'm mad.

Something tells me that it might not be THE Vin Diesel in this Chevy Impala. Then again, he rides in fancy cars for his job. Maybe he wants to switch it up with something practical.

If so, maybe you should have taken that as a sign from God that maybe you weren't meant to have that plate. Or swagger, for that matter.

No diggity. NO DOUBT.

The sexiest Gs always have ribbons on their cars. And their cars are ALWAYS mini-SUVs. That's they way ya work it, you sexy G.