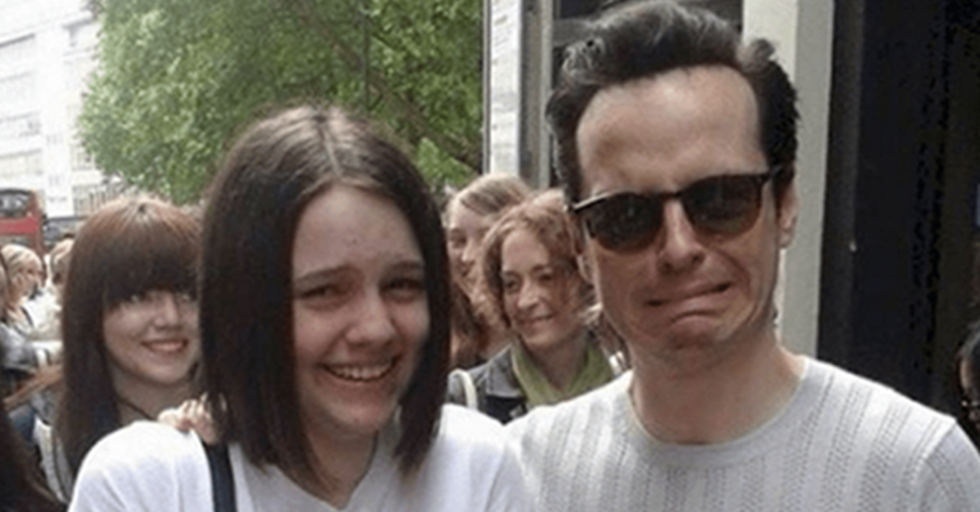 There's no question that daily fashion has become a lot more casual in the past few decades. As a result, lots of people find themselves out in t-shirts.

Sometimes they're unremarkable and plain shirts. But every so often, a person in a novelty t-shirt will stumble into an encounter with a celebrity who has some connection to their outfit. The odds of it happening are so rare, it's easy to see why the fans AND the celebs would want to snap a quick photo to commemorate the unlikely circumstances!

George Lucas must have run-ins like this one every single day.

There's a lot of Star Wars fans out there, and this one's wearing a shirt with a cow that says, "Milk, I am your father." It might not make any sense, but it makes for a great pic.

As you can see, Andrew Luck is clearly playing favorites between these two guys, opting for the fun showing the Colts support.

You monster! How could you even bring something like that up around Minnie?

Well, this worked out pretty well for both of them, now didn't it?

You know Bill Murray would love something like this.

In fact, I bet the pic was his idea. Now get a shirt with this pic on it!

First of all, who wears a shirt with a Basic Instinct scene on it? Then, who's lucky enough to spot Sharon Stone while wearing it?

I bet the guy that plays Gus Fring has conditioned himself to respond this way whenever he sees Walter White. Even on a t-shirt.

The guy behind him is wearing a shirt that says...

"Some people are gay. Get over it." Ian McKellan added his own spin on the concept.

If you're going to get a picture with Arya Stark...

...you might want to make sure you're wearing your finest Game of Thrones parody shirt.

Cersei and Tyrion aren't on board with the shirt.

I mean, look at them. They can't WAIT to get this over with. At least the fan's excited!

...you schedule meetings with other famous people, which allows you to plan ahead and dress for the occasion.

This one isn't really that "lucky." I'm sure George knew he'd be running into Harrison that day.

If you're going to run into anyone while wearing a shirt of them...

...then Jeff Bridges, aka "The Dude" is about as high up on the list as anyone would be.

Now make one saying you wish you were a millionaire!