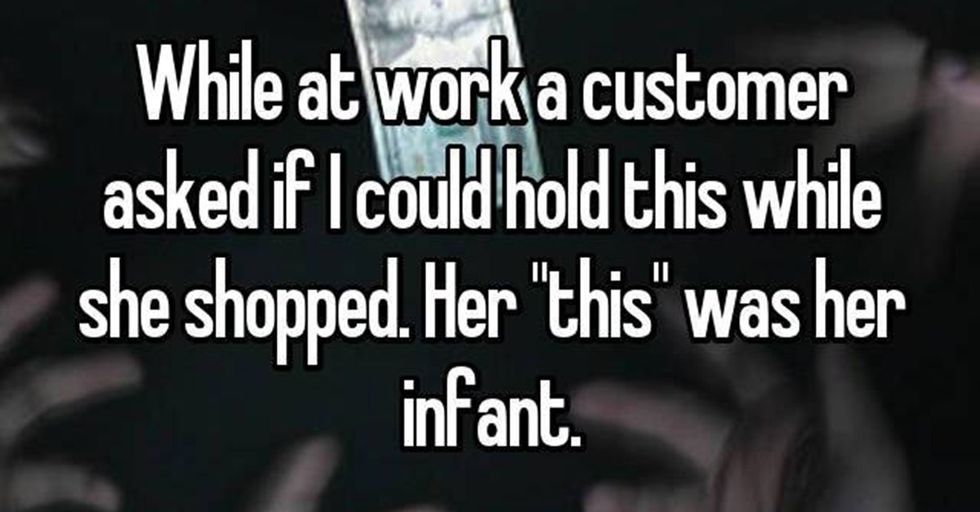 We all know that difficult customers can ruin a retail worker's day (or week. or year), but let's not count out the truly clueless customers as well. Sure, they might not be mean-spirited, but they can ask some insane questions that will make your brain hurt. And that might be even worse than having to deal with another "Can I speak to your manager?"

Never mind that watching kids isn't a store worker's job, but did the mom really want a stranger in a store handling her child? Probably, from the sound of it...

So you might not know that "quesa" is a prefix meaning "cheese," but surely you've had quesadillas previously. Have you been denied cheese in any of those?

Well, actually. I jumped the gun. He's totally wrong. Those aren't trees. They're broccoli. And only a toddler or a clueless man-child would confuse the two.

(This one's a little—or a lot—hard to read.)

"A customer asked me if she could take home the clothes and try them on and bring them back to pay. We have fitting rooms. That's basically stealing." Yup!

I really hope that the server responded "clueless customers" to get a reaction, but I'm guessing that the customer would have just said "ew" and ordered something else.

It's the FIRST word in the item's name.

You think it's slang or something? Like an "onion ring" is just a generic term for any type of ring? Like they might have beef or something in them?

These are the most understandable.

It's always possible that the customer just didn't see something. It's the customers who show serious lack of logic that get under my skin.

In my mind, when the worker pointed this out to the customer, the customer broke down in glee like a lottery winner does, crying happy tears.

Maybe they could make the smoothie denser!

Orrrrrr...maybe she could stop being needlessly picky and accept the smoothie in its appropriate cup. I am wondering why she wanted a smaller cup, though.

I wonder how exactly this customer got burned so that now they're asking this way ahead of time. What kind of weirdo would load up coffee with meat?

Someone doesn't know how ice works!

It's ok. Let's consider this a free thermodynamics lesson from the cashier at your local McDonald's. (Something tells me this isn't the type of customer that's reasonable about such things.)

I will say that IS the correct terminology, so maybe the employee just had to put on their "the customer is always right" hat and put on their defusing gear.

"Nope. Hanging mannequins in stores is just my way of giving back to the community."

Again, this is another instance of a customer just spacing out. I'm less judge-y about these because every once in a while, we're all guilty of this.

Yikes. It's one thing to be clueless. That's normally a victimless crime. But when you punish and berate people for not accommodating your cluelessness, that's when you cross the line into "jerk" territory.

I've got a theory.

Maybe the tornado that you're idly watching spin right by your house had something to do with your disruption. Maybe give the utility company a couple minutes before hounding them about fixing it. At least until the tornado's gone!

It almost sounds like the start of a riddle.

But then you realize, "Nope. No clever thinking involved. This person just doesn't know that a gallon IS a unit of size." Godspeed, all you retail-working warriors.