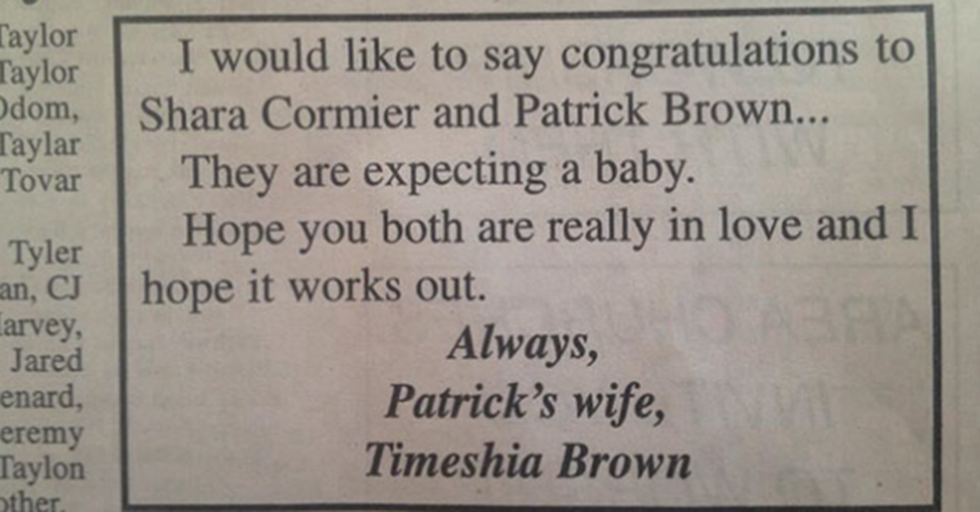 Revenge isn't always the healthiest way to address a problem, especially a romantic one. But that doesn't mean we can't enjoy seeing what happens when crazy, ticked-off lovers get back at their cheating exes. Check out the awesome pics and stories below.

This guy really put some serious thought into his psychological torture of his ex. It sounds like it paid off, though, doesn't it?

Get the mom involved.

Even though going through his cheating GF's mom wasn't his intention, it sounds like the cheating ex is STILL having to live down that time she blew it with her great BF. Nice.

Only everything's free. Because she cheated. Hopefully some homeless folks got some clothes so at least one person benefitted from this act of revenge.

Well, that's not SO bad. I guess it depends what the tattoos are of. If they're, like, half a princess, then that's bad. But if it's one that says "rock" and she was supposed to get "roll," then I guess he's still doing ok.

...it's partly this girl's fault for hanging out with a dude who wanted to get a customized Batman car. I mean, did she expect great things?

(But not the fun kind.) She sure put a lot of effort into this. I hope she at least got to watch him attempt to get this stuff back.

He won't pay now. But sometime down the line he will. Or the guy he sells it to will. Someone's gonna pay. I hope it's the cheater.

Grammar mistakes aside, this is a nice touch, putting it on the car. That stuff's hard to get off. Also, I think what she's doing is theft, but that's for the courts to decide.

Even though the card probably wasn't THAT heavy with the key in it, this is still a pretty brutal and awesome way to drop the bomb. I hope it was on his birthday.

For male eyes only...

Under the toilet seat so he's likely to get the message without her intercepting it. Brilliant. But did it seem weird when he took a pad and paper into the bathroom in the morning?

The first is that he posted this on Amazon of all places. The second is that he's controlling the house's temperature from anywhere in the world. She'll go crazy before she figures it out.

An ad in the paper.

This one's a little old-school, but that just makes it more charming. I like that she used last names, too. Even if they don't read about it, they'll hear about it.

...drop the bomb on them. I'm guessing this is a pretty addictive show, otherwise, what would the point be?

I thought the story was going one way...

...but it went another. The holes could've gotten them pregnant, but I doubt much time elapsed before an unpleasant burn shut down the romance.

I like the play on the "lost dog" convention, including multiple shots of this dude, just in case people see him at the park or in an alley. A+

It's hard to beat this.

The jilted person didn't destroy anything but sure did make life hard for the owner of the car. Oh, and any passing rollerbladers and cyclists. They'll wanna keep an eye out.