16 Times Americans Were Maybe a Little TOO American... | 22 Words 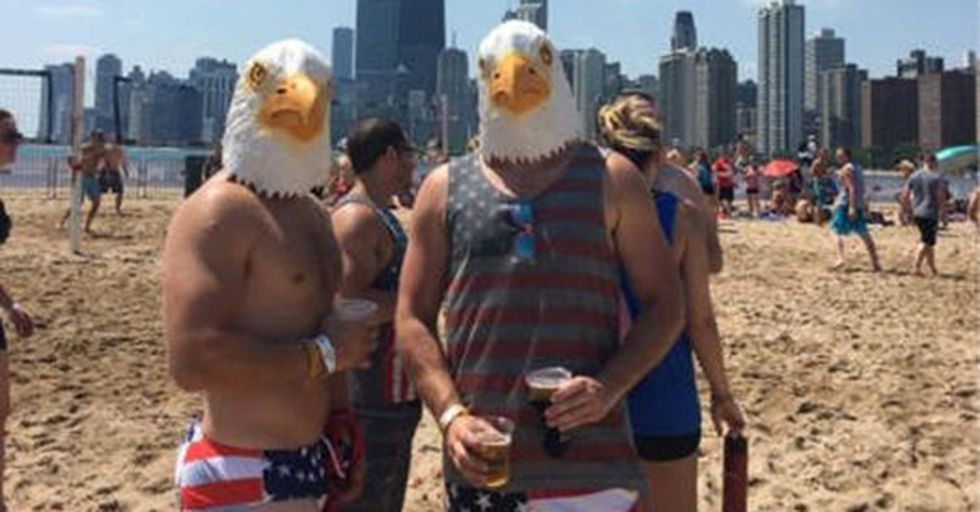 16 Times Americans Were Maybe a Little TOO American...

When it comes to pride for their country, Americans have never shied away from letting the world know how they feel about the U.S. of A.

Of course, sometimes that message comes at a cost. Like "being fashionable" or "wearing a shirt." Freedom isn't free, though, so don't judge these people for rocking the Stars and Stripes, red meat, and so much red, white, and blue that you might sear your retinas. Take a look at what it means to tell the world, "I'm American. Love all of me."

I'm guessing they didn't dress themselves, but they sure do rock those colors with confidence, don't they?

But no one will know your pride if you're wearing a shirt, so it's gotta go.

Sometimes, it means confirming some of the worst stereotypes about our nutrition and laziness.

...it just involves decking your car out in lots of red, white, and blue paper.

...you can tell the rest of the world to take their base-ten metric units and stick them up their...

...if you say or write the words "freedom" or "free" as much as humanly possible. Really drill them into people's heads.

...but it's American beer and American colors. And an...English...bulldog.

Careful not to go too fast or those eagle wings will lift you towards the heavens! *guitar solo*

They're doing their civic duty! (Well, they're not, but they sure do look like they will soon.)

...people spend thousands on paint jobs to let the everyone on the road know they're American.

Sometimes, being American just means proving to the world that you're invincible. Even if you're not. And what you're doing is very, very dangerous.

Pay attention. This person's going to be president one day.

This has to be the highway to the danger zone, right?

Soldiers get a pass, as always.

Also, how scary would it be if you were an enemy and you saw a swarm of U.S. soldiers with bird heads charging towards you?

No terrain too remote for these EMTs.

They could resuscitate a person on top of Mt. McKinley in that beast of a vehicle.