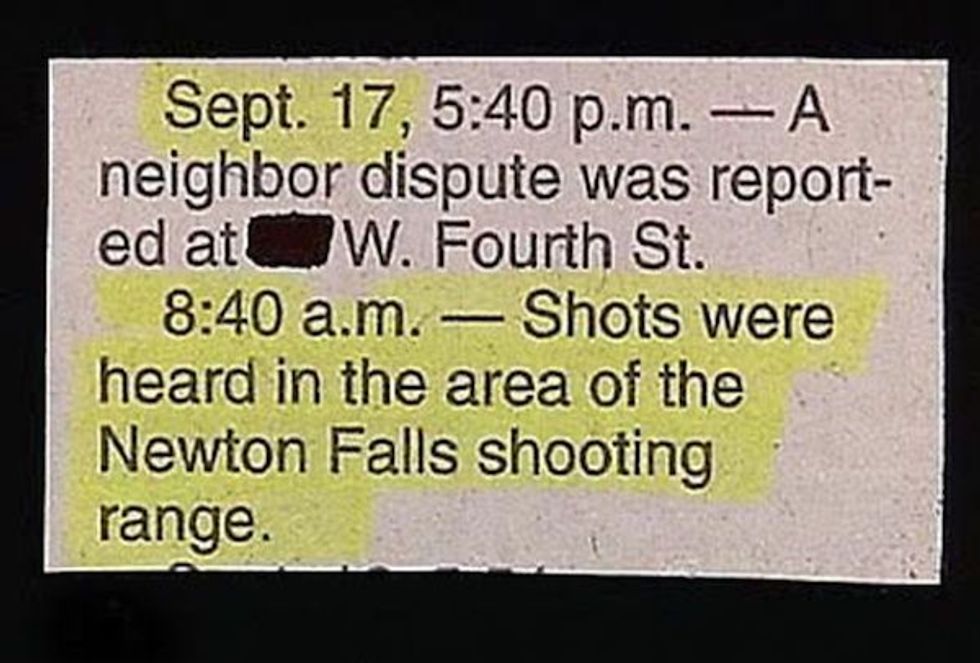 16 Times Police Blotters Made Comedy Gold Out of Hilarious 'Crimes'

Most of us know to call the police only in the case of emergencies, but as you'll see, some people have some very strange ideas of what constitutes an "emergency."

Not a lot of helpful info here.

If you're not going to specify ANYTHING, maybe you'll want to rethink the existence of reporting stuff to the local newspaper. Lots of mystery here.

Cats can be VERY demanding.

Not only did the cat attack a boy, but then it doubled down on its evilness by not allowing the poor boy to be treated for his injuries.

Canadians can NEVER be suspicious.

Mental note: If someone accuses me of a crime, pull out a fake Canadian passport to be cleared of all charges. And stay away from flashlights.

Can't blame the server for not taking this robber seriously. On the other hand, they could have simply taken a long time to retrieve the money and the person would have just passed out.

NOT how you're supposed to celebrate that milestone.

Maybe some nice balloons and a cupcake would make a better party next time. I love that this guy actually gave the reason for his drug-taking here. Not a bright dude.

This person's got some wacky theories.

I can't believe the police actually stuck around long enough to get the person's thoughts on how to properly contain them to yards. Very patient law enforcement.

Was it suspicious because of the way it looked? Or because this person doesn't normally find peanuts in their yard. If it's the latter...ok, but I think it was the former.

I have to meet this squirrel! You wouldn't think an animal that tiny would be able to ward passersby away from a whole boat. What an overachiever!

Wait...I think the two are connected.

You don't have to be Sherlock Holmes to piece together the elements of this crime. I pity the officers who had to clue her in.

If I was a cop, I would be PISSED that someone called me out to talk about their Farmville. Besides, those requests on FB got annoying. The thief should get a medal.

But I would like to know the place that sells burritos that are as large as newborns. That sounds like a pretty good value. Referral, plz.

You know that the type of person who does this is completely delusional and does stuff like this all the time. It would never occur to her that maybe she's NOT as popular as she thinks.

No way! This might be the worst criminal ever.

Points to the cops for having some fun. Points against the criminal for falling into the dumbest trap I've ever read about in my life.

He got to it as fast as he could.

Either this guy committed the crime, or he's the least attentive husband in the history of the world. Either way, she's better off without him.

I guess the turtle's speed can only be ascertained when we know how fast the police came to the scene of the "crime." I'm guessing they weren't in a huge hurry.