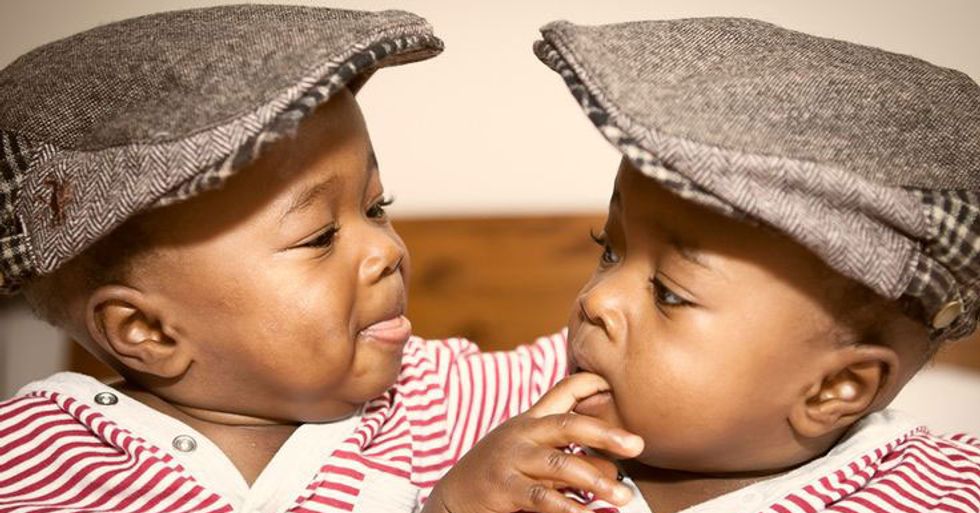 There's more to being a twin than just having a sibling the same age...

Even if you are a twin, or think you know a lot about them, I'm guessing that you're still in for an education (and a surprise!) when you check out this list of weird facts about all types of twins.

Twins can have different dads.

If two eggs are released by the woman in one month, then they can be fertilized by different men. It's happened before!

Twins can be of two different races.

Even twins separated at birth have been reconnected only to learn that their career, interests, and values are uncannily similar.

Moms of twins have longer lifespans.

Twins' moms live longer than individual kids' moms. Some think that this is because the mom is extra-healthy, evolution passes on her great genes to one kid instead of two.

Taller women are more likely to have twins.

Taller people have more growth hormone, and that hormone increases the birthrate of twins.

Moms who like dairy are more likely to have twins also.

Twins bond in the womb.

They start reaching for each other as early as 14 weeks.

They mimic each other perfectly as they grow up.

Conjoined twins can sometimes see through the other's eyes.

If twins share a common thalamus, they can often sense through the other's organs!

A breastfeeding mother's body "specializes" for each twin.

A mom of twins who breastfeeds can specialize the production of milk out of each breast for a certain twin.

You can tell twins apart by their belly buttons.

Since they're pretty much man-made, they're never identical!

A woman who's a twin is more likely to give birth to twins herself.

She's already got the genetics for it.

Twins don't have the same fingerprints.

The texture of the amniotic sac dictates this, not genetics.

Twins are twice as likely to be lefties.

No one's too sure about this one!

Twins can be born months apart.

This generally arises from complications...

Twins could commit the perfect crime.

Since their DNA is 99.9% the same, they could just both deny it and the court might not be able to prove who the perp is!

Oh wait — that's not a little-known fact. But we had to share it anyway.