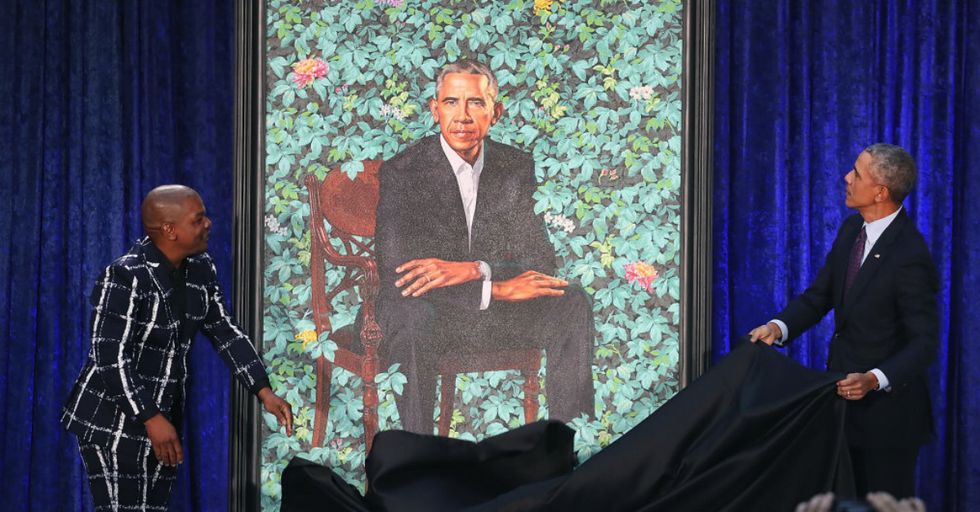 Kehinde Wiley, a gay, African American portrait painter known for portraying young black men over a fusion of classic period styles, received the commission of a lifetime last October. Considering Wiley has painted portraits for some of the biggest actors and musicians in the world, this new piece quickly raised the bar for his highly regarded work. Requested by the 44th President of the United States, Barack Obama, to paint his portrait for the Smithsonian National Portrait Gallery; Wiley accepted the challenge, immediately making him the artist-of-the-moment during a time in American history where art has begun serving a higher purpose than its creators could have ever envisioned.

As mentioned before, President Obama is far from the first celebrity to be put to paint by the hand of Wiley. Below is a list of actors, directors, musicians, and fellow artists who all have shared the distinct & beautiful honor.

Not only did Barack Obama serve as the first African American president, but in selecting Kehinde Wiley to paint his portrait for the Smithsonian, Wiley became the first African American artist to have work hanging in the National Portrait Gallery. Unlike more traditional presidential portraits, Wiley chose to depict President Obama sitting with his arms-crossed at the edge of his seat, hunched with a pensive look on his face. The beautiful background of green leaves and colorful flowers serves as a contrast to the former president’s body language.

Commissioned by Michael Jackson shortly before his death, Kehinde Wiley titled the last commissioned portrait of the King of Pop, Equestrian Portrait of King Philip II. Jackson never saw the completed 8x8 feet oil on canvas piece. When recalling the experience, Wiley said that it was “wonderful to work with him" and that he “felt a responsibility to him to get it done (after he died)."

A portrait of Spike Lee was the first of three commissioned pieces by Grey Goose for the Modern Kings series, where Wiley celebrated “modern kings of culture" with his brush strokes. The portrait depicts the legendary directory wielding an axe over his shoulder within a lush forest, as an ominous sky looms overhead. The portrait also happened to coincide with the 25th anniversary of Do The Right Thing.

The second portrait in the Grey Goose Modern Kings series featured hip-hop producer, Swizz Beatz. Swizz’s portrait is the only of the three with the subject(s) depicted at a profile. Swizz and the leashed Great Dane each look off the painting, shielding half of their face. Similar to the Spike Lee piece, each wears old-fashioned garments (Spike - working class, Swizz - upper class) and takes place in the forest on a cloudy, gray night.

The final portrait of the Grey Goose Modern Kings series depicts basketball superstar, Carmelo Anthony, wearing a head-to-toe blue velvet robe (royal garments) as he leans on his sword in the forest on a dark-skied night. Wiley's allusion of today's sports stars to royalty of the past is portrayed tastefully, as well as fittingly since Anthony was nicknamed the "King of New York" while playing for the Knicks.

Grandmaster Flash and the Furious Five

To celebrate the 2nd Hip Hop Honors ceremony in 2005, VHI commissioned Kehinde Wiley to paint a portrait for each of the year’s honorees. Wiley depicted Grandmaster Flash and the Furious Five's portrait after a seventeenth-century Dutch civic guard company.

Another member of the 2005 Hip Hop Honors class was LL Cool J, who suggested to Wiley that his portrait be modeled after John Singer Sargent’s portrait of John D. Rockefeller.

Very appropriately, Wiley opted to depict the most rambunctious Hip Hop Honoree and least favorable of authority, Ice T, after Napoleon by David. Seated on a gold thrown, holding a spear and a scepter – the scowl across his face is patented, doesn’t give a f**k, Ice T. Always ready for battle.

Standing against a sky blue background with a white fleur-de-lis pattern, Wiley posed a mature-looking Notorious B.I.G. in a pinstripe suit. With a cane in one hand, and the other on his jacket button – the portrait radiates cool.

In the background of the album art for Santigold’s 2012 record, Master of My Make-Believe, hangs a Kehinde Wiley portrait of Santi. In the painting, she’s dressed and posed as a “distinguished army officer" inspired by Joshua Reynolds’ painting of Banastre Tarleton, “Portrait of an Officer."

In 2010, PUMA commissioned Wiley to paint portraits celebrating some of Africa’s biggest soccer stars. The Puma World Cup Africa Collaboration culminated in portraits of Samuel Eto’o of Cameroon, John Mensah of Ghana, and Emanuelle Eboue of the Ivory Coast; plus a portrait with all three men “symbolizing the united countries of Africa" (as pictured above).

Last year Kehinde Wiley presented his latest exhibition: Trickster – a series where influential, contemporary artists are paired with a mythological take on the “trickster trope" and posed after Goya’s Black Paintintgs. Wiley added, “Artists are those people who sit at the intersection between the known and unknown, the rational and irrational, coming to terms with some of the confusing histories we as artists deal with… The trickster position can serve quite well especially in times like this." In this first piece from the collection, Wiley depicts artist Wangechi Mutu as mamiwata, an African water goddess. She poses holding a snake in a dark rainforest.

Another portrait featured in Trickster is of artist/writer Lynette Yiadom-Boakye posed after Jacob Morland of Capplethwaite. She stands confidently with a shotgun in her hand and five dead rabbits at her feet.

Wiley chose to depict artist and award-winning photographer, Carrie Mae Weems, in her portrait as Eris, the Greek goddess of strife and discord. She stands turned away from the viewer, looking back at something not seen. She stands among rocks in front of a canyon off in the distance.