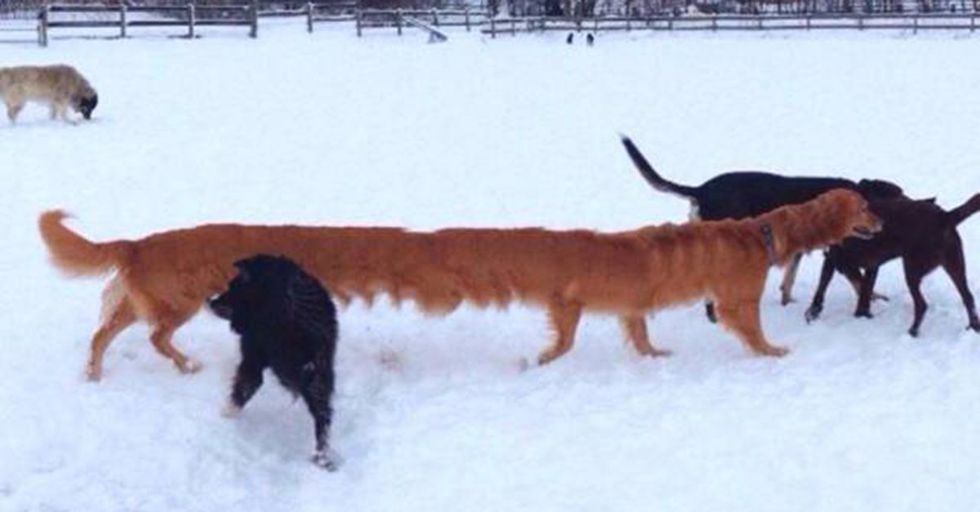 It's been about five years since smartphones first gave users the opportunity to capture larger-than-life panoramas on their phones by slowly turning them from left to right. The technology's gotten better since then, but it's still not perfect. Neither, for that matter, are the people using it, so oftentimes your gorgeous landscape looks more like, well...these.

So, is this a cat, or is this some sort of horrific monster from the dark beyond, slithering up from the depths to steal your soul?
Even the other cat isn't sure, it's walking away like "hecckkk to the no," with a "not today, Satan," thrown in for good measure.

This one calls to mind a very familiar object.

The slinky dog from the Toy Story series. Of course, this is a cat, but you get the idea. It's long and bendy. Close enough.
Now, if this animal was in your home, it would slink around your furniture and wind its way all around your legs. It might even tie itself into knots if it wanted. Just saying.

This one's a little less ridiculous.

We mean, it's still insane, but the footprints lead you to believe that maybe, just maybe, this is a real animal. A wonderful beast of lore.
There's one other thing it looks like as well – The Human Centipede. Have you seen it? Very gross movie...

A long body with centipede legs to match.

The best thing about this pic is just how natural the cat looks. An eight-legged cat. Looks like something from the Discovery Channel...
Or a horror movie. We're getting Human Centipede vibes again. Ick – just ick.

Conversely, the wrong method can also turn your pup into a compressed accordion shape.

The little body with two legs looks more like a bird than it does man's best friend. Kinda cute if you don't think about it too much, isn't it?
The minute you start thinking about it, however, you tilt your head, squint sideways... Nope, still cute! Phew!

The legs don't ALWAYS show up, though.

Then you get something like this five-legged ferret-dog playing in the snow with a headless black pup.
It's a very confusing image to look at. Can't tell the difference between one and the other, so then you start having this odd feeling of ick.

This is what happens when a dog turns its head in a panorama shot.

You get a two-headed hell beast that looks like something out of Dante's Inferno, guarding the gates of the netherworld.
It's a legit Cerberus, which means we're now looking around the corner for its master, Hades. Although we definitely shouldn't look. You remember how the story of Orpheus went, don't you?

This dog looks like it WANTS to be bigger than it actually is.

Ohh, he's so cute!!! Look at him, all confident, spring in his step. He doesn't even care that he's lopsided. This is the way he was made, and he's literally going to run with it.
On the plus side, think of all the money you'd save on dog food and grooming supplies with such a compact mutt. Just don't knock him over.

The weirdest thing about this photo isn't the dog's body.

But rather whatever's going on with the Cocker Spaniel's tail. It looks like a kite in the wind or something.
But still, look at that floof! Gaze in wonderment at its luxurious silkiness. So floof! Silky floof!

Too many legs to count, but there are...a lot. At least that sheep's got extra body parts. The one next to it seems to be lacking a head.
Also, it just looks like it's staggered on repeat. Very head-scratching to watch.

Here, we've got a ram and a sheep both getting a little distorted.

The other animals were wise enough to stay out of frame. Why would someone use panorama mode for a close-up anyway?
However, it looks like we've discovered a new animal – goatus elongatus, the mythical elongated goat. Pretty cool.

Big Ben got a little wobbly that day. If this was intended as art, it does look more than a little like a Salvador Dali painting.
It literally looks like it's going to melt into the floor like one of Dali's clocks. And Big Ben is a gigantic clock, so it fits!

The Leaning Tower of Eiffel.

We didn't know that panorama mode afforded the user the opportunity to conduct tower mashups. It's like something out of a disaster film, isn't it?
It's the newest wonder of the world! France and Italy's greatest architects decided to get together, and this is the result – sheer genius!

Thank goodness this is a distorted pic and not reality.

That tsunami would be a really bad time for anyone who lived within miles of the coast. We've got far too many reminders of that fact in recent years.
Because if it was the reality – doom. You couldn't even run from this one.

Careful if your kids want to play in THIS ocean.

The water gets really deep really quickly. The dark sky isn't helping reduce the creepiness factor, either.
Better yet, just stay at home. You can do beach time literally any other day.

How much does it cost to get a pool like this?

We imagine the designer would have to be on some pretty strong acid to sketch this out.
But also, it looks like one of those – you must experience this! – attractions that people make in Vegas. Come see the remarkable sideways pool, the newest version of infinity pool.

Or at least, they LOOK like trains. Kind of a cool effect, honestly. Think about how many kids that thing would hold.
You could literally have like, five schools worth of kids inside these. They'd drop off all the kids in every borough.
Just pray it doesn't need to turn around. Or create a circular track.