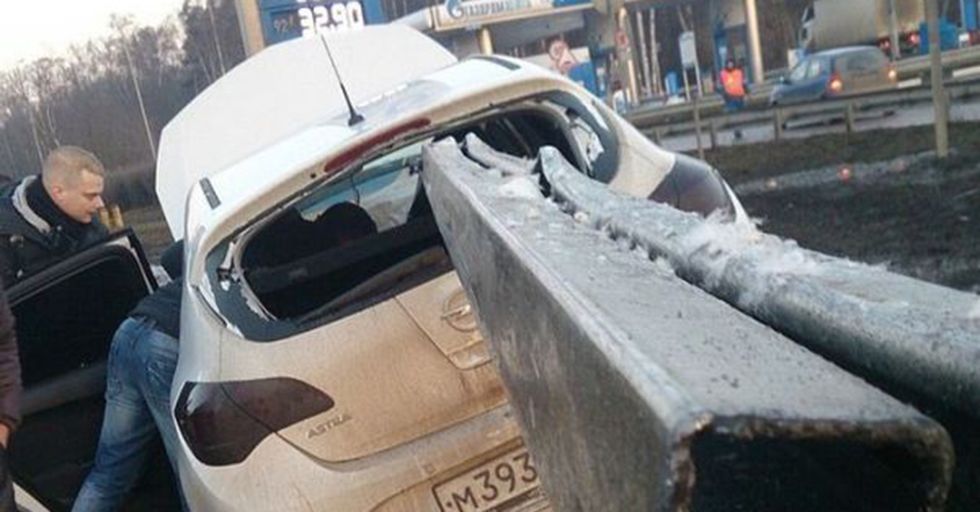 When most of us experience a close call, it's normally something mundane. Like we almost sent an angry email, or we almost dropped a birthday cake taking it out of the oven. But for other people owe their lives to good fortune. See how close these people came to the end of their lives in these shocking photos!

I'm not sure what this arrow-looking thing is.

But as you can see, it couldn't have come any closer to passing through this driver's arm. I'm very interested in what caused this.

Hope no one was riding shotgun.

If so, I'm assuming they didn't fare QUITE as well as the driver did in this unfortunate incident. Again, it would be great to know how this came to be, and video would be AMAZING.

But I guarantee you it would have compressed that car like it was nothing. Did the driver even know this happened in the moment?

Want to stop a bullet? Use a cell phone.

As weird as it is, this isn't THAT uncommon. In fact, you'll see another instance in this list. So take it out of your purse and keep it in your pocket.

This driver sure is glad they can, because otherwise, he would have snapped and he'd be in some very cold water with little chance of survival.

It looks bad enough from this angle.

But you'll see in the next picture just how crazy this was. It's hard to tell how he survived at all.

See? Flat as pancake. Someone's looking out for him.

How long did he stay trapped before help arrived to rescue him? It must have felt like an eternity.

We can't see the person who survived this.

But rest assured, they did, despite the weight of the truck crushing that car like it was a soda can. Time to find a new car.

It looks like the roof fell in on their Christmas tree.

That's what I firsts thought. Then I wised up and realized a tree crashed into their living room doing a LOT of damage.

This car didn't just crash into a house.

It actually managed to take a shrub in with it. I wonder how much damage was done to the house. That can't be cheap.

Teetering on the edge.

If that car didn't hit that concrete post, there's a good chance that it would have been heading way further down into the water.

If you're looking for the damage, check inside the house.

That's a big branch that I'm sure wasn't there earlier. That looks like the bedroom, too. Glad no one was around when this happened.

Imagine if that had happened at night. That would have been the worst alarm clock in the history of unpleasant wake-ups.

Not seeing the problem?

Those are missiles. Sure, they have safety mechanisms, but you'd still want to, uh, drive carefully with such precious cargo in the rear.

Need any help determining how heavy this is?

Look no further than the passenger side. It's totally wrecked from this giant metal wheel. The driver lucked out.

Another cell phone, another bullet stopped.

Does phone insurance take care of this? You'd think they would, if only because it speaks to how durable these phones really are!

The fact that this is a convertible means this driver could have suffered way more damage than someone in a hardtop. Hopefully, they were spared any debris.