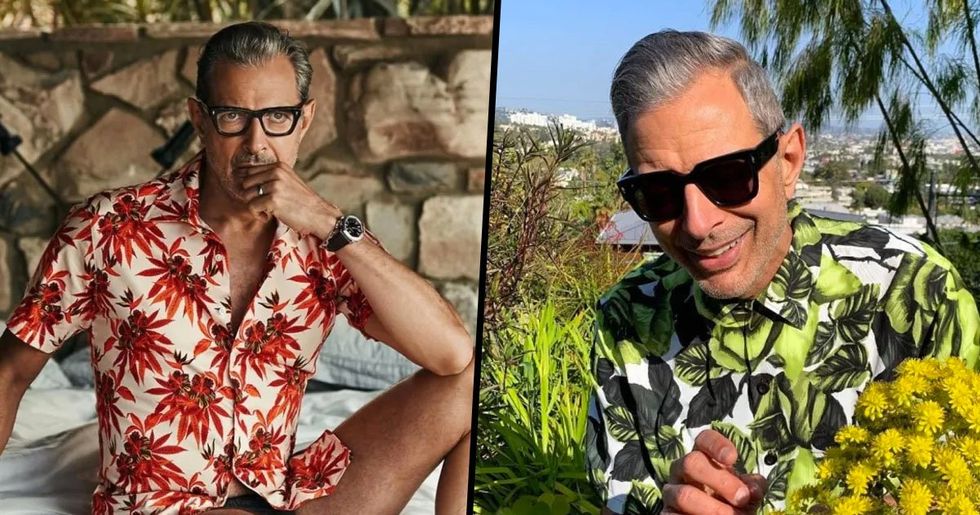 It's not exactly hard to have a soft spot for Jeff Goldblum.

The American actor and musician has had a successful career spanning over forty years. Starring in many classic movies, namely, The Fly, Jurassic Park, Independence Day and, more recently, The Grand Budapest Hotel.

The thing with Goldblum that sets him apart from other A-List celebs is that he genuinely seems to be a really nice, interesting guy.

Scroll on to learn more about the man who played Ian Malcolm and discover why the internet just can't get enough of Jeff Goldblum.

Once you've seen him in those dazzling shirts, you'll totally get what all the fuss is about.

Goldblum isn't afraid to admit that he googles himself (Hi, Jeff!).

We've all done it right? There's a strange vanity to be had in seeing what the internet has got on you. Jeff Goldblum has more written about him than most, so it must be hard to keep track. It's fan art that Goldblum is most interested in. Speaking to GQ, in 2017, Goldblum admitted, “I like to look at #jeffgoldblum on Instagram, which my wife makes fun of." Jeff also admitted to saving his favorite images for his personal amusement: "There are many paintings and pictures of me, some nice and some very primitive and bad. People get tattoos of my face. This is me in a banana split, where I’m the center of a dessert". Fair play to Goldblum. Who doesn't want to find pictures of themselves superimposed on a banana split, or tattooed permanently onto a strangers arm?

Even if you don't feel like googling yourself, a Goldblum search is certainly worth your time.

Instagram is a treasure trove of Goldblum-related art, from likeness drawings to more abstract art that is inspired or dedicated to the actor.

Fans have got really creative with their Jeff Goldblum art.

What can we say? The man is an inspiration to artists everywhere.

The more conceptual the Goldblum art, the better.

Many Goldblum fans appear to have cushions emblazoned with his face. It seems to be quite the trend.

And it's not just cushions that you'll find with Jeff Golblum's face on...

Candles, t-shirts, action figures... if you can think of it, someone on the internet has probably already printed it.

Of course, Jeff Goldblum has been Simpsonified.

But when are we going to see him on the show? (cough... Matt Groening....cough). Maybe there could be a Simpsons/Jurassic World crossover, with Goldblum as Lisa's math teacher. You heard it here first.

A man of many talents, Jeff Goldblum performs as part of his jazz group, the "Mildred Snitzer Orchestra" every week. Next time you find yourself in LA, why not go and check them out at the Rockwell Table & Stage. Obviously, with a schedule like Goldblum's, you won't be able to catch him every week, but when he does make an appearance, he is reportedly only too happy to meet and fans and have a chat.

You can stream the entire album, titled The Capitol Studios Sessions by Jeff Goldblum & The Mildred Snitzer Orchestra on Spotify for free. You can check them out on YouTube, too!

Goldblum's willingness to engage with his fans isn't just a courtesy extended to those at his gigs.

Jeff Goldblum is happy to get a photo with fans anywhere, any place.

He's not afraid to engage with strange fan requests either, it seems!

Here we see Goldblum at a photocall with a fan, who asked if he would pose holding her lead. As you do. The post also suggests that Goldblum gave the fan his number... but I mean, this is Instagram, we can't believe everything we see.

Just look at that.

We told you that there were a lot of Goldblum cushions out there.

One Twitter page that gets a lot of attention is @goldblumlooks. This page is dedicated to celebrating Jeff Goldblum's "spicy daddy fashion".

Nobody can get enough of Goldblum's hot dad vibe.

I think it's fair to say that part of the Goldblum appeal is his riveting fashion sense. So without further ado, let's indulge ourselves in seventeen of Jeff Goldblum's best looks. I've never seen a guy pull off print as well as Mr Goldblum does.

The guy's got a gift.

Here we see Goldblum in full print-glory. He constructs an outfit from an eclectic blue bomber jacket, sliders, graphic socks, and tiny, tiny black shorts. I would describe the look as "cyclist chic".

Next, we have Goldblum in a look that he describes as "Silverback gorilla".

And Jeff Goldblum, of course.

Here he is fashioning another jazzy shirt from his friends at Prada.

Goldblum makes me want to split all my shirts in half.

Goldblum's a print trendsetter, there's no way around it.

It's most probably not Jeff Goldblum... but that's okay! You can still admire his beautiful shirts.

Here we see Jeff styling a printed shirt under a brown blazer for the ultimate Daddy Cool aesthetic.

Of course he can make it work! He's Jeff Goldblum, for crying out loud.

Prada can really make anything work on Jeff Goldblum.

I'd describe this one as "Suburban Skater Kid Meets Suburban Hipster Dad". A bit wordy? How about "Sk8r Traitor"? "Sk8r h0me0wn3r"?  You get the idea.

Jeff Goldblum has made me rethink my wardrobe choices.

Jeff Goldblum's made me rethink my relationship choices...

Teach us your ways, Jeff! My plants have this annoying habit of dying, all of them, every-time... for some reason.

Roses are red, violets are blue...

Jeff Goldblum only has eyes for you.

Goldblum sure knows how to pick an appropriate backdrop...

"It's all aesthetic, everything for the aesthetic..."

Now this one is my personal favorite...

Goldblum has done it again. We're witnessing art on art here people. And have you ever seen a shirt look this crisp? Clearly, this man owns an iron.

Let's wrap it up with this one: Goldblum in a Goldblum fantasy.

You might think that a shirt is just a shirt. Until you have a glimpse into Jeff Goldblum's wardrobe. That's all for now folks. I release you into the ether of the internet to explore more Jeff Goldblum content... or you know, whatever you want.