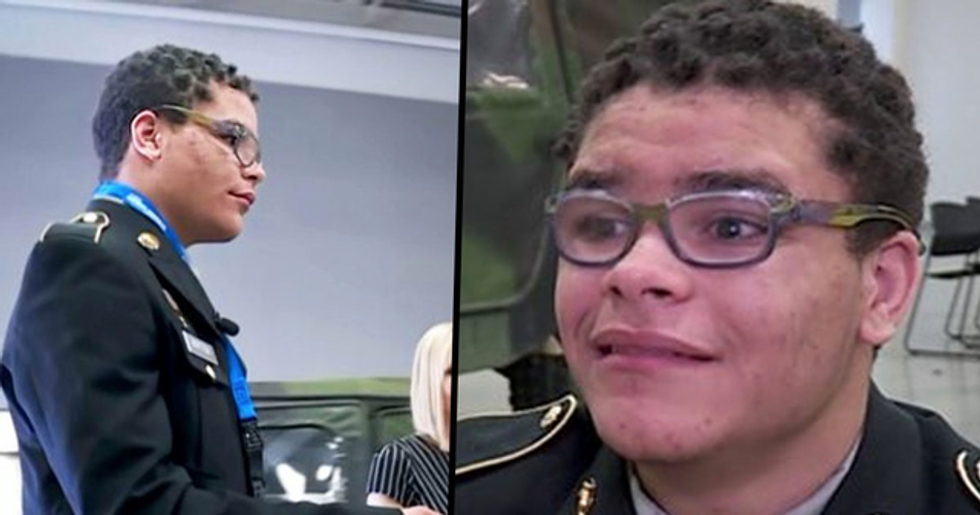 It's the sad reality of life that there are people out there with no real family. And, as a result, these unfortunate people end up being passed to and from various different families throughout their childhoods.

Though there are a lucky few that end up finding a permanent adoptive family, it is more common than not that these children will spend their lives being passed around different forms of temporary housing, and will never find parents who are willing to permanently adopt them.

And one Oklahoma teenager has gone viral after his emotional plea for someone to adopt him before he turns eighteen.

Haven, who turns eighteen in just a few months, is desperate to find a family who can adopt him before he ages out. Keep reading to see the emotional video below. Hopefully, we can help to make his dream come true.

Hundreds of thousands of children are in the foster system here in the US.

And the children suffer as a result. Many children are bounced from one foster home to another, and will never experience any stability while growing up. Some children are even separated from their siblings in the foster process. And, more often than not, children don't even get a real foster home, they are, instead, sent to live in institutions or group homes.

And, sadly, for most children, the foster system is anything but short-term.

A lot of people assume that the foster system is a short-term solution, a substitute family, while a child's home life is getting settled or arranged. However, children are often stuck in the foster system for years, and some never end up getting adopted.

The common misconception is that only young children are in foster care.

The average age of entering foster care amongst children in the States is actually 8-years old. And, considering that the average child spends at least 2 years in foster care, this means that there are a lot of older children hoping to be adopted.

Too many teenagers are getting stuck in the system for too long.

Having neither their biological family or any prospective adoptive family, some children are finding themselves entering their teenage years still in the foster care system with no stable surroundings.

This can have catastrophic effects in adulthood.

When a child ages out of the foster system (when they turn eighteen-years-old, that is), they are discharged from whatever foster care system they are in at that time and sent off to live alone.

This is obviously going to come with many problems.

The outlook for most of these young adults is grim, given their histories of broken relationships and unstable educational experiences. They are far more likely to become pregnant as teenagers, be chronically unemployed, and spend their lives in poverty than other young people.

So, understandably, aging out can be a scary prospect.

Should we allow politicians to tell us the truth....that paying for housing and education for children aging out of… https://t.co/T5SgDyqqvT
— Katherine Rogers (@Katherine Rogers)1561952191.0

Because who wants to embark on life completely alone, and ultimately lose their only chance of having a real family? Well, one young man has decided to take matters into his own hands.

A seventeen-year-old made an emotional plea on live TV.

Haven, who comes from Oklahoma, has been in the foster care system since he was twelve-years-old. He is yet to find a family who is willing to officially adopt him and will be aging out of the system in a few months.

Like many children in the foster system, Haven is forced to live in a shared shelter with 4 other fostered teens. When asked about the shelter, Haven replied, "It gets old at times. Just being there. Not being able to go out whenever I want."

He would like to join the military one day.

Because of his interest in one day joining the military, Haven was with members of the Oklahoma Army National Guard, touring their facility and learning more about what it’s like to be a part of the service. He stated that he wanted to be a part of the army to "be part of something bigger than himself and to serve his country. I’m also involved with the Junior Reserve Officer Training Corps."  He would also love to travel the world, which the army would certainly be able to make possible.

He was then asked about his adoption wish.

While at the barracks, Haven was asked to elaborate on his wish to be adopted before he ages out. He replied, “So you can have someone to help you, like be there for you if you need help. Not just going into it all blind because that’s how you get into drugs and bad stuff like that."

And when asked on what type of family he'd like?

He simply responded with, "Anyone that would take me."

On what type of family he has in mind, he continued, "As long as it’s a family that will show love for me and be there for me." He added that he was eager to become part of a real family so "you can have someone to help you, like be there for you if you need help."

He broke the nation's hearts.

This poor young man is about to enter the scary world of adulthood completely alone. He has gone through so much already, it seems only fair that someone adopts him now... Surely.

You can watch his emotional interview here.

People online have since responded to Haven's plea.

Ok, so who wants to co-parent, and go adopt this 17 yr old kid with me?

It turns out that young Haven has won over many hearts, as a number of people from across the country expressed their willingness to give the young man a proper family.

And the comments were overwhelmingly positive.

Many people said that they would adopt such a fine young man in an instant. There was also ex-military members commenting, sharing their advice on how to get the furthest in the army.

Though there has been no word on whether Haven's wish has been granted...

Haven could still be given the family and the home that he so desperately deserves. You can visit the Oklahoma Department of Services here if you're interested in helping Haven's dream come true.