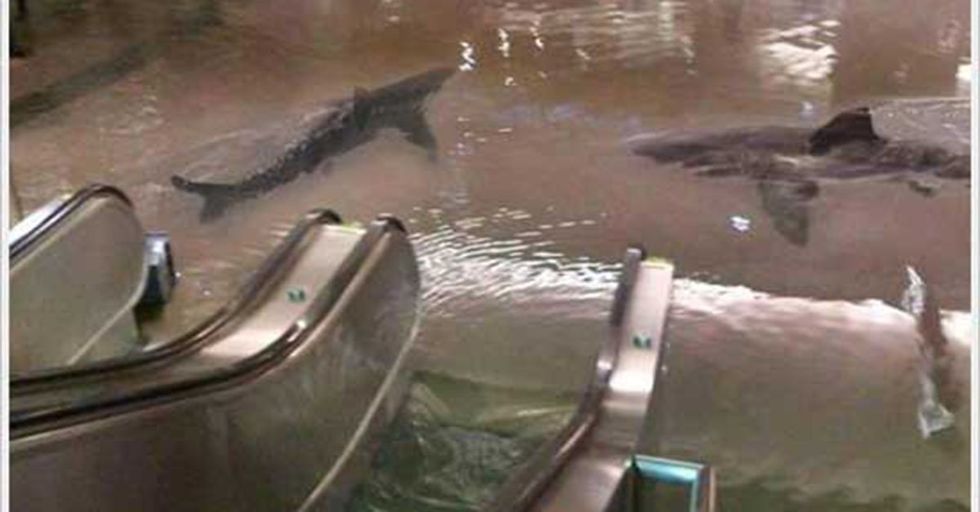 18 Famous and Iconic Photos That Are Actually 100% Fake

Yup, thanks to Photoshop, it's as easy to lie with a picture as it is with the written word. So while these photos you're about to see may look too crazy to be real...they are. Many people fell for them, but if you run through the list, you'll know the real story behind these pics you've seen floating around social media.

This was supposedly a Hurricane Sandy pic...

...but it was really a mashup of the Statue of Liberty and a still from the movie The Day After Tomorrow.

This circulated as candid photo recovered from the wreckage of 9/11.

Uh, no. The planes didn't approach that way.

They didn't even get the island right!

We all want this blue watermelon to be real...

But it's a simple Photoshop color switch. Sorry!

The 'Tree of Life' from somewhere in Asia?

Nah. Disney World's Animal Kingdom. At least you can still visit it!

This looks too crazy to be real...

...and of course it's not. The flood is real from the Dubai Science Center, but the sharks were added.

The story goes that some boy chained his bike to this tree when he was young, and the tree grew to encompass it.

Sorry, it didn't go down that way. It's Photoshopped.

Real evidence in the assassination of JFK?

Nope. Real footage from the fictional movie JFK, though.

Jack Nicholson getting dolled up as The Joker to hang with Heath Ledger's iteration?

Eh, sorta. They're both wax statues, which makes them kinda real. I guess.

It was originally a peace sign before some prankster decided to rewrite history.

This picture (and the shirt) never existed.

She did wear one that said "Stop Being Desperate," then someone took some creative license.

This moving picture pulled a lot of heartstrings.

But the subject was the photographer's nephew, and it was all staged.

This is supposed to be what lightning striking a tree looks like with a long exposure.

But this is just some easily identifiable Photoshop work. Nothing special.

This supermoon pic went around...

...until it was quickly rebuffed by the guy who took the original photo, sans moon.

This Sarah Palin pic had a lot of people fooled...

...but those with their biases aside correctly called it out.

This is the original...

...so in the name of good taste, we're not going to show the 'shopped version of the airborne cheerleader having an "accident" on her squad members.

This pic went around as a downed Malaysian airliner.

But the background came from the TV show Lost, which isn't exactly subtle.

Why mess with the photo? The second one is plenty cool.

Some people just get greedy, I guess.