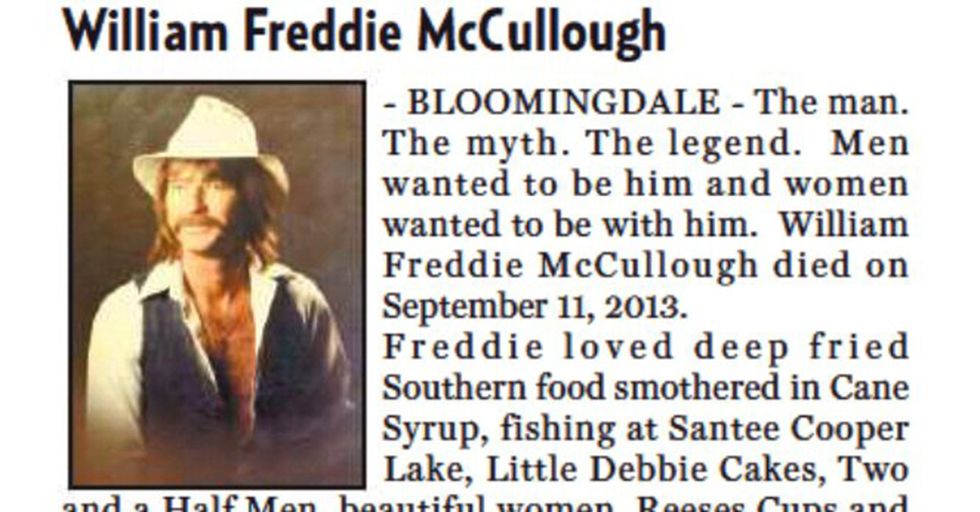 We all die. And it's always gonna be sad. But it doesn't have to ONLY be sad.

I'm not sure if it was the departed themselves, family members, or friends who cobbled these comedic masterpieces together, but this certainly makes the sorrow a little more bearable, now doesn't it? Take a look and enjoy the humor in what I'm sure were some grief-stricken times!

I mean, how many grandkids is a sh*tload? And how big isher Baby Huey great-grandson. They really should have included pics, because it's going to be awkward to ask a stranger's family.

Going out on a punch from Batman sounds painful. But then again, Batman doesn't go around clocking innocent people, so what did this dude do?

...I'd feel guilty bailing on a funeral to go see a movie, but if it's what Jack would have wanted, who am I to deny him his last request?

Beef's roster of family members tells me that this is gonna be one kick-ass funeral I don't want to miss. I'm counting on a beer bong and monster trucks.

...was actually probably something his friends were doing while he was alive, so his request could have just been "carry on as you were, friends."

Douglas was a man of few words.

But to his credit, he gets right to the point, and if they charged for obituaries by the word, he made out pretty well.

...that the Rickster was the undisputed king of dad jokes. It's not listed, but I think we can all assume it from this excerpt.

Is this obit for Toni?

Or for the Waffle House that's gonna miss her business? Either way, it's pretty sad. Scarf down some hash browns in her honor, folks.

But congrats to Judy for playing her GI cards so close to the vest for years of marriage. Something tells me he's watching down from heaven...waiting.

We've all heard some variation of this one.

I'm not sure if it's an urban legend at this point, but given the state of the Browns, they wouldn't let him down, but rather drop him.

Not sure if this is true...

...or just a fun bit of fiction. But either way, I'm digging it. You do you, the late Bill Ziegler. I hope you get your potted food, whatever they hell that is.

If that's what they're putting in the obit...

...I can't wait to hear what they say about Pervy Dave at the wake. Something tells me it will be rated NC-17.

We get it. The candidates sucked, so you chose to die. In hindsight, we REALLY could have used that Hilary vote, Mary Anne. You really jammed us up.

...smile 'cause it happened. Freddie lived enough not just for several men, but for several generations of men. I'm sure he's up in heaven, laying flooring and...other stuff...with a bottle of Cane syrup in hand.

...would have been to ensure that this ran in The Times. They probably would have done it, too. They LOVE free speech. Even when it's slamming them.

I never thought it would be admirable trying to box a woman...

...but when you're facing as much adversity as Chris was, I'm gonna chalk up the one-handed sparring (since the other hand was cradling a flute of Veuve) as a testament to his resolve and toughness. Nice work Chris.

...a line from her favorite film, but did it have to be THAT line? Seems a little callous. But it's certainly memorable.

The deaths aren't happening yet, but history has indicated that everyone's mortality rate is 100%, so hang tight and your number will be called in the order it was received.