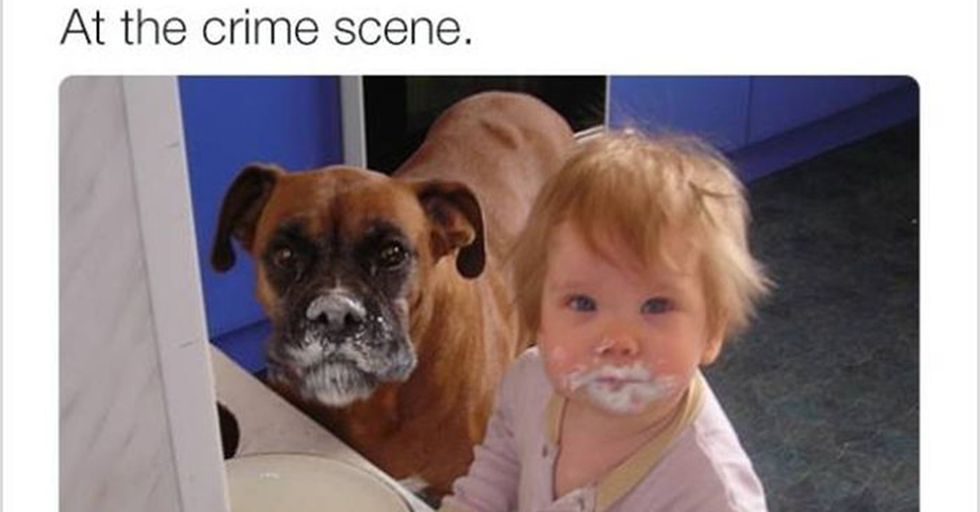 18 Photos of Guilty People Who Thought No One Was Watching

Face it: We all do weird stuff when we think we're alone. It may not seem that weird or odd to us, but for someone who happens to stumble upon our questionable behavior, things can get pretty awkward in a hurry.

We all have that movie.

You know, that movie that puts us on edge, even though we've seen it a thousand times? It can be from any genre but don't pretend like you're unfamiliar with this pose.

Well, if you were looking for the full spectrum of human emotions, you just found it with the guy representing "sadness" on the left, and the girls representing "joy" on the right end of the scale.

This one clearly got transported back to a more innocent and worry-free time. I mean, look at the expression on his face. You can't coach that!

He had good intentions, at least!

The older you get, the easier it is to sleep almost anywhere. I swear that dads can fall asleep easier than babies can. Normally not when they're gearing up for a jog, but...whatever.

This one made the rounds.

The guy in the background may have technically been conscious when this photo was taken, but something tells me it wasn't in the front of his mind when he woke up.

Watching cartoons is one thing, but doing it with headphones and a little snack is something else altogether. Did he ever find out this photo was taken?

If this guy didn't know a camera was on him, I'm going to guess that he lives a pretty dramatic existence. I mean, who just does something like this casually?

If that's a crime scene, as the original tweeter states, then it's the most adorable crime scene in the history of the world. If only all crime was this cute.

This might be the most innocent nap in the world, but that dog looks guilty of SOMETHING. We just need to know what it is. Have you checked the trash?

Dad's gone off the deep end.

I don't know what's going on here, but if he's standing on that table to work on his golf game, someone needs to buy him one of those little putting greens before he breaks his neck.

I guess this dad knew the camera was on him.

But what he didn't know is that Mom would find out about this pic long after the fact, creating a whole new set of unintended consequences.

I can't advise that everyone goes through a sleeping stranger's phone to text their spouse, but in this instance, it's pretty darn funny, isn't it?

No sleeping masks? No problem. The bigger mystery here is how someone can sleep straight on their back like that. He looks like a corpse!

Caught Dad being a hero.

Something tells me Dad would be elsewhere if it wasn't for those pesky kids. But as it is, he's chillin' out, watchin' cartoons, and probably having a blast.

Man, I really hope this pic looks worse than the actual events were, because if it's not, that girl's in for a rough morning. That is, if she wakes up before noon.

I have to hand it to that guy and his awesome powers of persuasion. That's a pretty neat trick. Kudos to the pup for playing along!

Something tells me this dude didn't think he was going to get away with such a difficult feat undetected. He looks happy, though, and our judgment will never change that.

That's the type of stare men come back with after they've been away at war for far too long. That's the look of a man who's been changed by a tragedy.