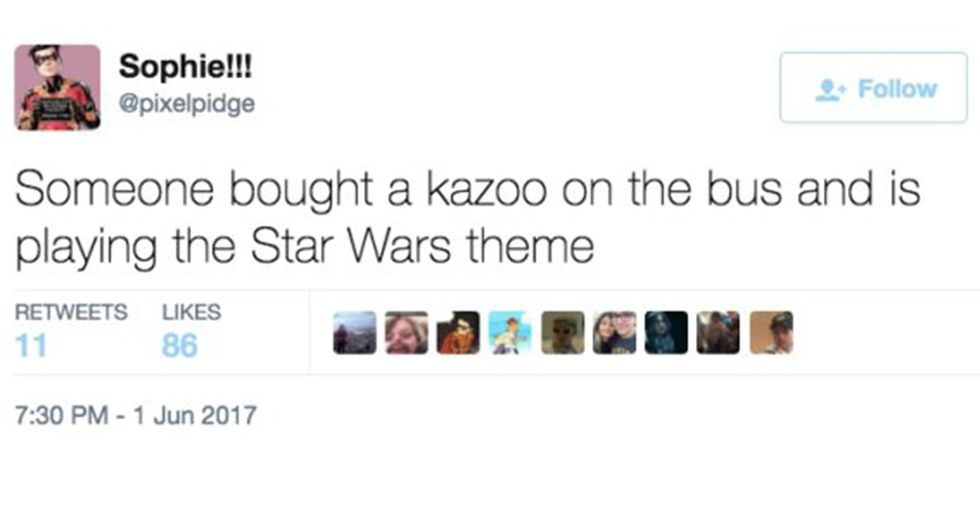 Even if you take the bus or train every day, you might not be prepared for some of the stuff you see. Check out these tweets that show sometimes just riding the bus in a city can be a big adventure.

That's quite a collection of objects.

$10 to anyone who can piece those random items together to form some sort of craft or toy. Cucumber person, maybe?

Honestly, I would think half the train would be mortified and the other half would be delighted. Then, of course, a fight would break out.

It would be way cooler if she wasn't even doing anything with her newly-free hands, but that's just the way she holds her coffee.

This is how riots start. Or, at least, very uncomfortable bus rides. Maybe just smile and keep to yourself. That's probably the best advice.

I mean, not that I would know. In fact, if you're carrying stuff that sketchy, maybe just spring for an Uber or a cab. An accident would require far too much explaining.

"I tire of your antics. Your worrisome methods are something I choose to longer endure. Good day to you. I SAID GOOD DAY!"

I know that urge.

Sometimes, your desire to correct grammar outweighs the manners your parents and society have taught you. It's a struggle we must all bear, especially on public transport.

It could send reverberations throughout the whole car if you pack people in tight enough. Of course, it's still better than having to listen to someone's phone ring when they don't mute it.

I really think it's okay to correct that person, but just make sure you do it as the doors are closing and you're on one side and they're on the other.

It's not exactly my taste, but damn if that doesn't spruce up the interior. Nice work, anonymous train car interior designer. Maybe update your look, though!

I mean, points for being prepared, but I really don't think that's the right type of food to be eating around other people. Because...it might make them hungry.

Sometimes the surprises are pleasant ones.

Anyone who gets upset at a little girl reading a book out loud can get right off the bus. That's adorable as all heck.

I mean, if you don't really like the dude that much, sixty steps up and down could be a legit dealbreaker. But you don't HAVE to share that info with the whole train, now do you?

...if you take the same route as fellow commuters, you can find that person on board the train or bus. Of course, you'd have to talk to them to get the ball rolling on that.

Did you happen to bring a SHOWER CURTAIN with you on the bus? Because if you didn't, you're going to need to borrow someone's jacket and a hole punch!

Maybe get a sleeper car on a train if you're going to carry on that kind of relationships with your sandwich. I bet it was delicious, though.

Maybe he's seeing what some of the other people here have tweeted about.

You can't help but laugh sometimes. That is, when stuff like this doesn't drive you to the brink of insanity. Or drive you to purchase your own car.