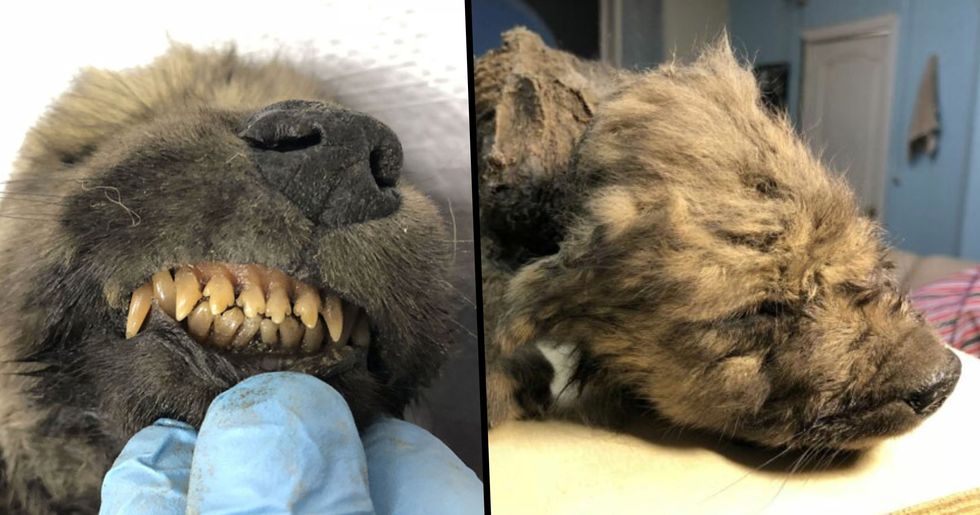 We all know dogs are man's best friend, and for most of us, we can't imagine our lives without them. While the average dog can live ten to thirteen years, a recent discovery in Sweden reckons they have found the world's oldest dog.

Whilst studying the Siberian permafrost last summer, scientists have unveiled a remarkable discovery.

Deep in the snow, a puppy has been found that could be the oldest known specimen of what we now recognize as domesticated dogs. Despite being an estimated 18,000 years old, it's actually creepy how much this dog looks like the pups we know and love today.

Continue scrolling for the amazing pictures...

The dog was completely frozen.

And I don't mean it was dressed as Elsa or Anna...(cute though, right?)

But as we all know, it can be difficult to determine the difference between a husky and a wolf.

"Wait...hang on a minute, your teeth look mighty sharp."

And as you can see they are definitely more dog-like...

The scientists were amazed at the discovery.

Researcher, Love Dalén, who was part of the team that found it discussed how the team felt when they first discovered it. Dalen said: "It was amazingly well preserved even before they cleaned it up. [When we found it] we didn’t know how old it was. They said they found it in the permafrost but it happens that things get frozen in there that are only a few hundred years old or even a few decades."

The team had no idea how old the specimen actually was...

Not until they radiocarbon dated it (obviously...)

"When we got that result it was amazing."

According to Dalén, discovering that the animal was 18,000 years old changed everything. The researchers were excited to realize this because "18,000 years ago is an interesting time period where we think a lot of stuff is happening with both wolves and dogs genetically."

So what does this mean?

Naturally, this discovery has led people to wonder what the scientists intend to do with the finding.

What secrets does this dog have?

The scientists are hoping the discovery will help them "understand where and when dogs were domesticated."

This discovery is very reminiscent of the classic Futurama episode, "Jurassic Bark" (2002)

Now, this was a particularly memorable episode because of how moving it was. Weirdly the dog extravagated in Siberia looks pretty similar to the dog in the cartoon.

I wonder if this pooch died waiting for his owner to come home...

In the Futurama episode, fans are left heartbroken as they watch Fry's pet dog wait by the side of the road for him until it dies. Of course, Fry, who was frozen and transported to another century has no idea just what his loyal friend did.

The history of the 18,000-year-old dog remains a mystery.

This pooch could hold the answers to how and when wolves were domesticated into dogs, but it will take a team of clever Swedish scientists to work out its secrets.

After working out that the pooch was a male, the team decided to ask their Russian friends to name it.

We can't wait to see what they discover!

Continue scrolling read all about how you can get paid $41,000 a year to look after 2 adorable golden retrievers. And these dogs aren't even frozen!