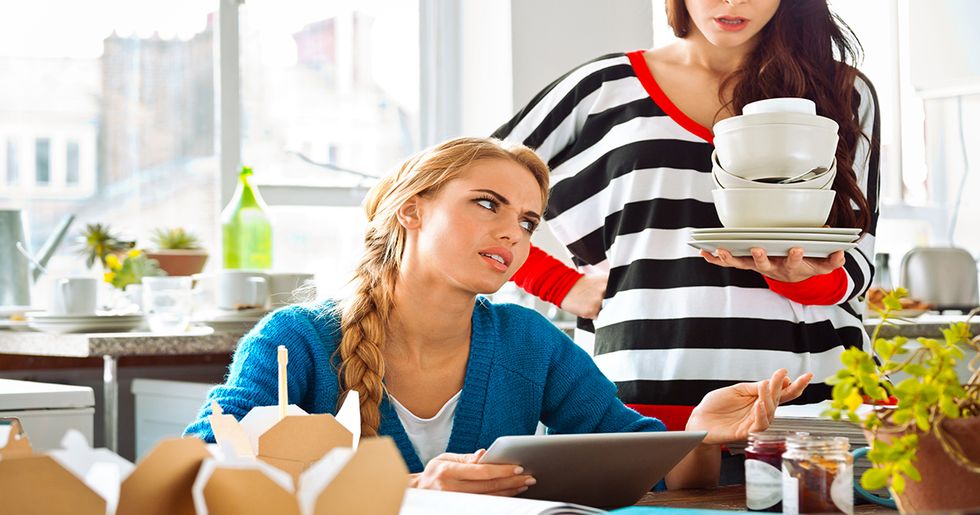 19 Times Having a Roommate Was Kind of the Worst

At some point or another, most of us have dealt with having to share our living space with someone else.

Whether you're a college student or living in an expensive place, roommates are just a fact of life.

Not only do you save some money, but if you're roommate's cool, there's always someone around to hang out with! But it's not always awesome. There are some roommates who simply don't cut the mustard. Maybe you're dealing with one of those right now. If that's the case, well, at least you can rest assured that they're not as bad as these people.

Like this roommate, who set this up to scare everyone:

Right before going away on vacation, of course. What a monster.

Or this roommate who doesn't change the toilet paper.

If you don't change the toilet paper roll when it's empty, there's a good chance you already have something wrong with your brain. Maybe you should get that looked at.

This roommate got a new vacuum sealer.

Foiled by MyFitnessPal! Some pal they are, right? You know those funny dog-shaming pictures people take? Well, this next photo starts a new trend: Roommate-shaming.

This roommate forgot about pizza!

That's gotta be one of the cardinal sins, right? This photo is 100 percent deserved.

A roommate who doesn't do the dishes? Preposterous!

At least there's candy in the note to sweeten the sting of being called out, right? That's gotta count for something.

Another roommate, another terrifying scare tactic:

Where do they get these things?! Also, why do they insist on putting them in places that are guaranteed to terrify the people with whom they live?!

This roommate had a great method of saving some pizza for later:

10 bucks says they never ate that pizza and it eventually started attracting mice. How do I know? I've had roommates before.

This roommate is very, very protective of their stuff:

This is what you get when your roommate doesn't want to share and just happens to have a wax seal. (Honestly, this isn't the worst idea.) This next roommate might actually be evil (but also kind of hilarious).

A roommate with a lighter:

That's why you don't buy spray-on deodorant. Or if you do, you don't allow anyone else within 10 feet of you when you're applying it.

This roommate has a Domino's car magnet for some reason?

No, it's fine. I didn't want to be able to open up the fridge without any hassle, anyway.

At this point, you may as well just put the roll on the correct way. This takes a lot of effort.

This roommate had a great idea for a "prank":

Yes, all of those cups are filled with water. This is just completely unacceptable.

This roommate just wants to play a game:

I've got a fun game to play too! It's called "eviction," and you are definitely going to lose! This next roommate apparently forgot what a can opener is for.

Time for a snack.

If only there were some sort of tool that had been specifically designed for opening cans. Oh well. Until such an item is invented, all we have is the trusty bread-knife-and-rock method.

What are these? Forks for ants?

Either this roommate has a good sense of humor, or they actually thought those were full-size forks that somehow shrunk in the dishwasher. I'm really, really hoping it's the former.

You could put your name on your food...

Or you could just label everything in a way that your roommate couldn't possibly misinterpret the message. That's probably a better idea.

Washing your dishes after you use them?! What a novel concept!

This person just started documenting all of the messes left by their roommate:

There. Now it's art. Looking for a way to passive-aggressively let your roommate know they're doing something annoying? Share this article with them! That should do the trick.