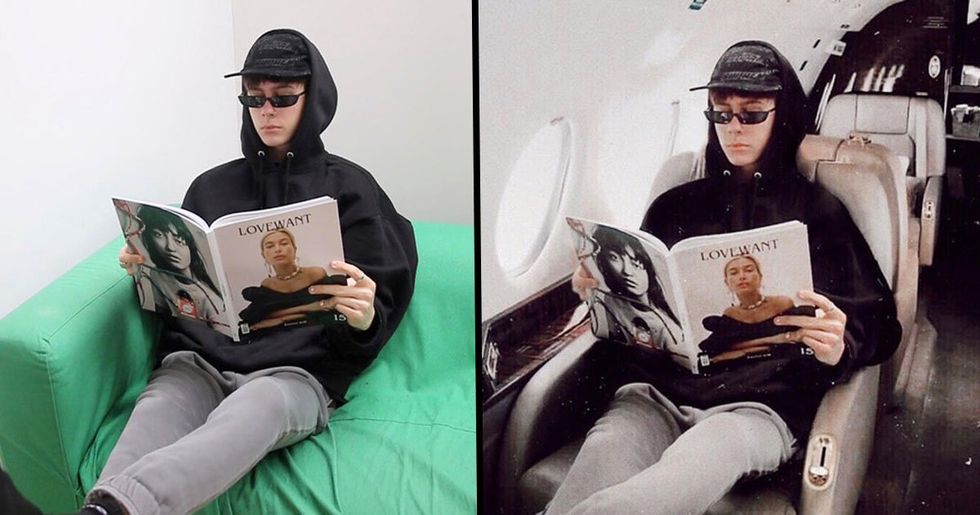 One question to keep in mind when traversing the post-digital world is, where does reality slip?

It turns out, in Instagram culture, where likes, shares and comments become the new form of currency, it's actually quite easy to fake a lux life - I know, it’s shocking isn’t it!

A recent experiment by nineteen-year-old vlogger, Byron Denton, proves two things. Firstly, don’t believe everything you see on Instagram. Secondly, dressing in designer gear and boasting an affluent lifestyle is enough for people online to like you. All it took was the magic of photoshop for Denton to manage to transform his Insta-persona from your average student to a rolling millionaire.

Denton wanted to see if it was possible to fake being rich on Instagram and he used minimal props and photoshop tools to achieve this end.

Here’s a step by step guide to faking luxury on social media.

Pose outside of a designer store.

This could be anywhere. Denton used Oxford Street.

Find a photo of a celebrity weighed down by designer bags.

Photoshop the bags into your hands, and change the lighting so you look slightly etherial.

You're an influencer. Congrats.

How many likes did this picture get?

This post blessed Denton with over eight-thousand likes. Which is a lot of likes.

Buy some designer stuff, you don’t need much. Just make sure it’s visible.

Pose in a ridiculous manner with your "serious face" on.

This one hardly even took any photoshopping at all.

The likes keep on coming.

This one gained even more online attention… over thirteen-thousand likes!

Now for the coup de gras.

Your very own private jet.

If a private jet doesn’t make people interested in you, nothing will...

Take a picture of yourself reading a magazine while sitting down.

Something to keep in mind...

White walls are easier to photoshop than open spaces.

Find an Instagram picture of a private jet, and meticulously edit yourself in there.

Although only people who can’t read put on sunglasses when reading a magazine indoors...

This one upheld the twelve-thousand likes margin.

And it got over three-hundred comments. That’s some serious attention.

Denton reported that there was a lot of confusion prior to admitting to the hoax.

Asking how he was affording the "sudden change of lifestyle."

And only five people noticed the fakery.

Only five people were concerned enough, or knew enough about the mechanics of photoshop, to call him out.

The video has now reached over seven-hundred thousand views!

So what does this say about our society?

Well, a lot, and we actually think it’s pretty bleak.

Why do we so often take social media to be a depiction of reality?

It seems that, as soon as we take out our phones or open our laptops, we lose our critical faculties. We're all guilty of it!

Secondly - why do we care so much about rich people online?

Look, we get it, we all aspire to something, but why does it have to be this?!

If someone came up to you on the street, and said, “just to let you know, I’m really rich, look at my bags and this picture of me on a jet," you’d think they were insane, or a d*ck, or both. But when it’s communicated wordlessly online, we somehow fall for it...

This is a real problem.

We don’t necessarily think that’s a problem in and of itself, but if we spend all our time staring at people on private jets, it warps our perspective on what a tenable aspiration is.

When a culture is purely visual, there’s not much nuance to it. Which means we get sucked into blunt statements, like this photo of Christiano Ronaldo (the most followed person on Instagram), which basically reads, "look guys - I’m rich." Why do we care about this!?

This picture of an egg is, believe it or not, the most liked photo on Instagram.

What does this tell us about our online-selves? It tells us that we’re nihilistic, meme-drunkards, who find just enough time in our crowded days to like a picture of an egg. It’s not poetic, it’s not profound, it’s just an egg.

And well done to Byron Denton for exploiting this so soundly.

Next time, we'll all have to be more careful.

Next time you like a photo of some person on a jet-ski, or of an egg, just remember, that egg could be a lie.