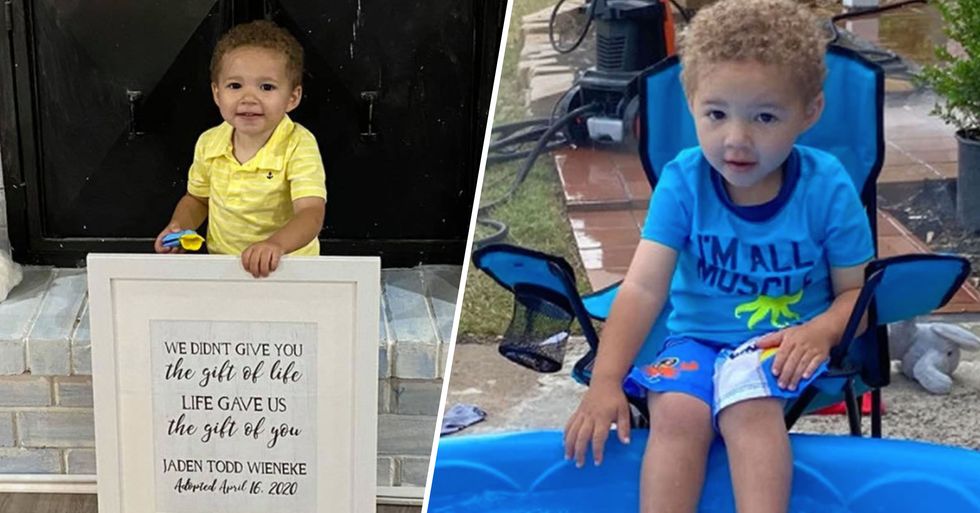 Cancelations of court hearings have put the brakes on many in-person adoptions across the nations, but one family hasn't let the pandemic stop them from expanding their family - adopting a 2-year-old via Zoom.

Keep scrolling for the heartwarming story about how this family overcame the odds...

Hundreds of thousands of children are in the foster system here in the U.S.

On any given day, there are nearly 443,000 children in foster care here in this country.

The fostering process is a long one...

And children are often bounced from one foster home to another, therefore never experiencing any real stability while growing up. Some children are even separated from their siblings in the foster process.

The longer a child remains in temporary care, the more likely it is that he or she will experience multiple placement changes, and therefore disrupted relationships in the future.

Many children are stuck in the foster care system for years.

A lot of people assume that the foster system is a short-term solution, a substitute family, while a child's home life is getting settled or arranged.

Sadly, this isn't always the case.

Some children spend years in the foster system and struggle to ever find a permanent family.

So, when a child is adopted...

It is always a momentous occasion.

Adoption is a huge deal for any family...

But for a child who has never experienced a loving home, it is a completely life-changing moment.

It is certainly an event to be celebrated.

And marks a huge chapter in many families lives.

Due to the global pandemic, court hearings have been canceled...

Which poses problems for those hoping to get adopted as in-person adoptions can no longer go ahead.

But an utterly amazing story has surfaced this week.

A 2-year-old has been adopted in the most unlikely way.

2-year-old Jaden had been staying in his foster home with Kimberly Wieneke and her husband.

The couple had been fostering Jaden for over a year.

But, Kimberly and her husband soon realized they wanted to adopt Jaden.

We knew the day they terminated [the parental rights] that we would be adopting April 16," Kimberly told local news outlet KNWA.

Sadly, due to the virus, the family's court date was canceled.

So, the couple came up with another idea...

They decided to follow through with the adoption using a more unconventional method...

All everyone has been talking about lately is zoom calls...

From quizzes to meetings, people are relying on the web conferencing app to keep in touch with people.

But it seems it also came in handy for Kimberly and her family.

The family's successful court hearing was held virtually over Zoom.

There was one downside, however.

"We see all the pictures after the adoption day - they're standing there with the judge, everyone is smiling," Kimberly explained. "We didn't get that."

Regardless, they are over the moon that Jaden is officially part of their family.

via: KIMBERLY WIENEKE via KNWA

"Sometimes it feels like not real, I mean we sit and look at him and we're like, 'He's ours'. "

People have been truly touched by Jaden and his family.

We need more positive news like this right now.

After seeing the story, other parents have come forward about their zoom adoptions.

This is amazing! Though this story is incredibly heartwarming, and amazing to see, adoption doesn’t always work out so smoothly. Keep scrolling to read about a seventeen-year-old who was begging to be adopted before his eighteenth birthday…