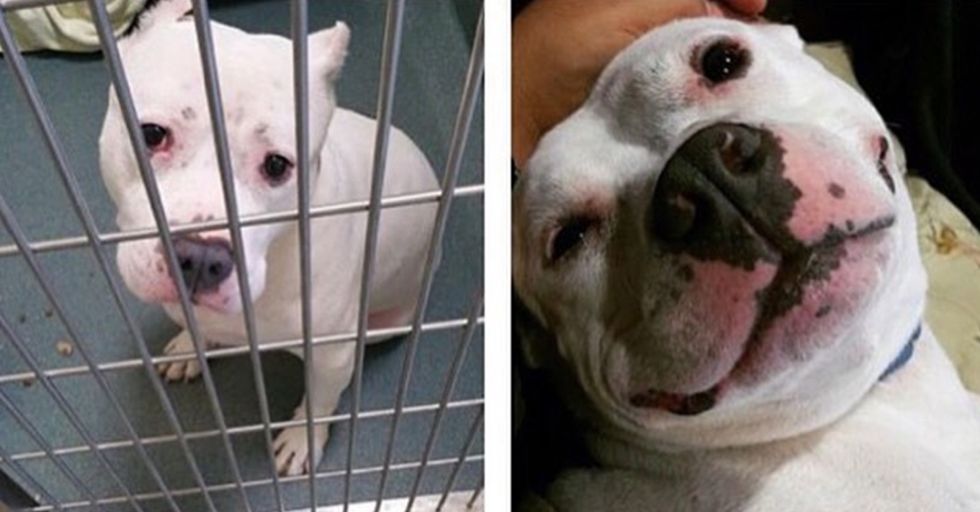 Dogs are more expressive than they know. You can tell what a dog is thinking and feeling at any point in time.

Seeing the difference between these dogs before and after they were adopted into loving furever homes will fill your heart with such warmth you might find yourself at a shelter looking for an animal to save.

This is Rosie the pit bull, and she's ever so grateful for her new home. Look at that smile!
This beautiful beast completely transformed after joining a loving family. He went from a meek and timid pup to a regal champion.
OK, first of all, Pillow is a great name for a dog. Second of all, I cannot get over that happy face on the righthand side.
This is Lulu and this is what her owner has to say: "You can change a dog's life so much by giving them love." Amen!
The difference here is unbelievable. This poor pup looked miserable and sad, but after joining a new family, she's full of energy and letting that tongue fly!
If you want to know how a dog is really feeling, look no further than their big, expressive eyes. They say it all.
This pretty pup's name is Zoe. Everything turned around for her when she got a new family and a hot pink bandanna.
This guy may not have figured out his most flattering angle, but he sure looks way happier in the picture on the right. Double chin be damned!
The story of Siri: She was adopted by a family after she followed them into a museum. They decided to foster her, but they fell in love and adopted her. Obviously — look at that face!
He was a little moppy mess when he was at the shelter, but with a good grooming and a forever home, he's a brand new dog!
This wirehair fox terrier was way more wire hair than fox terrier before he was adopted. Now he's got a great haircut and a new-and-improved life!
Sure the haircut is a drastic change, but Maggie's transformation is all about the eyes and the smile!
Snapped just one month apart, these photos show Penny's incredible transformation. She used to be afraid to go outside, and now she's a downright explorer!
Rigby went from a scared, sad animal in a cage to a master of couch lounging in only five months. Good for you, Rigby!
Luna's eyes used to be wide with fear. Now, they're wide because she's constantly searching for treats!
These two pictures were only taken a few days apart, and already Sammy is doing so much better and is clearly so much happier.
This little Ewok was found as a stray, roaming the streets of Alabama. Now she's living the sweet life and even has her own wardrobe of outfits!
This little bugger went from a shaking, nervous wreck to a confident, perky pup! The miracle of love...
That worried look was wiped right off of this dog's face once he found himself in a loving home with a family who takes care of him.
Teddy! Poor Teddy was sad and lonely while he was stuck in the shelter, but his life has totally transformed today.