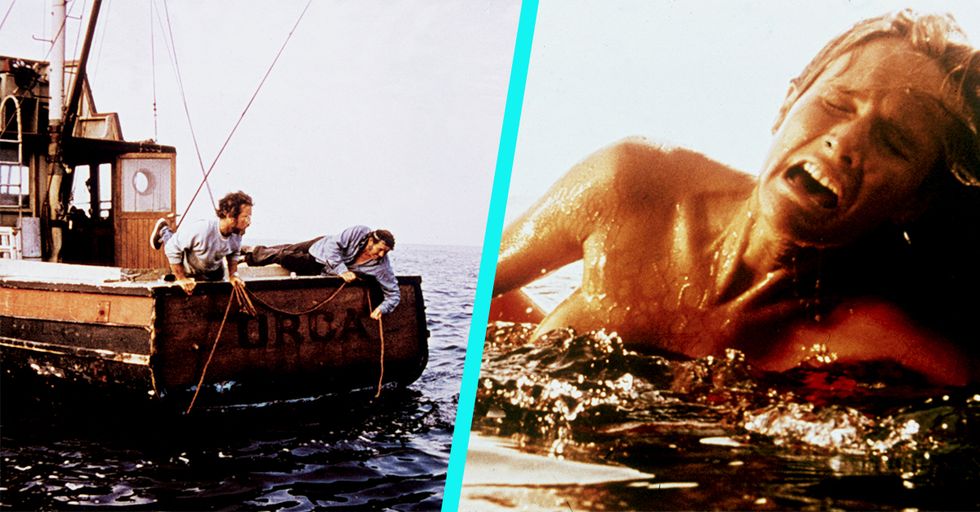 We're all familiar Jaws, the iconic shark-attack thriller and original 'summer blockbuster' 0f 1975. This Steven Spielberg film is considered groundbreaking for a number of reasons, its use of a near-lifelike mechanical prop shark being one of them. You've (hopefully) seen the movie, but there are pieces of behind-the-scenes trivia from Jaws' creation that will further enhance your enjoyment of the flick.

Here are 20 crazy obscure facts about the behemoth animatronic shark from one of the most famous films of all time.

What’s in a name?

Reacquaint yourself with Bruce, the 25-foot long animatronic shark...named after Steven Spielberg’s then-lawyer.
“Bruce" the shark actually consists of animatronic triplets. One shark is the full, ‘uninjured’ Bruce; one is wounded and torn open on the right side, and the final is torn open on the left. They cost roughly $250,000 each to build!
The full "Bruce" enjoys a life of touring museums now; "Bruce II" lives at Universal Studios and tries to bite tourists on the Jaws ride there.
Many other films have paid homage to Bruce—including Finding Nemo. Remember Bruce, the vegetarian great white shark?

Bruce's use in the film was, originally, a process of trial-and-error.

When the shark was brought to set in Martha's Vineyard and placed in the ocean, it immediately sank. A team of divers had to swim down and retrieve it form the ocean floor.
Little-known is the fact that Bruce was tested before its sinking in Martha's Vineyard, and had worked flawlessly during the test run. The test took place in unsalted water, however, and the salty ocean water is what messed with Bruce's controls.

Spielberg wanted the shark to win.

Jaws is based off a novel of the same name by Peter Benchley. When Spielberg read the novel, he found the human characters to be so unlikeable that he was rooting for the shark!
A fan theory about Bruce suggests that Bruce is not a genetically perfect shark specimen. The appearance and insatiable bloodlust of Bruce does not match the look and behavior of a typical great white, which some fans believe makes him a gratuitously mutated shark. The theory remains unconfirmed.
Another inconsistency is the size of Bruce; male great whites only grow to be 16-19 feet long, with females being the only members of the species capable of reaching over 20 feet in length. Bruce, who is a male shark, would be an anomaly among great whites.
One factor that may explain Bruce's size is age. Great whites can live over 70 years, so Bruce may just be really, really old and grumpy.

Live shark footage was used for the production.

Footage of real great white sharks circling an underwater cage was used for live-action film sequences.
One particular piece of real-life footage included in the film was a shot of an actual great white shark that got tangled up in a line of the submerged cage.

A shark of many names...

"Bruce" wasn't the only nickname for Jaws' villain. Due to all of the technical issues the production team faced during filming, Spielberg took to calling it "the great white turd."

Crazier than The Joker and wilier than Hans Gruber:

Bruce was ranked the eighteenth greatest villain on the AFI's list of 100 Heroes and Villains. That's one dastardly shark!
Spielberg has said that he always considered Jurassic Park (1993) to be Jaws' landlocked sequel of sorts.

Fellow director George Lucas visited the Jaws set, and wanted to photo of himself with his head in the shark's mouth. Spielberg tried to prank Lucas by closing Bruce's mouth, but the plot backfired. Lucas's head got stuck inside of Bruce's closed mouth, and it took nearly three hours to free him.

A fourth version of Bruce was found, years after the movie's release, in a junkyard. This version, affectionately christened "Junkyard Bruce" by fans, was pulled from the original molds used to make the movie's sharks.
An episode of "Mythbusters" debunked the validity of how Bruce is killed in the movie. The shooting of a pressurized scuba tank triggers an explosion that utterly destroys Bruce, but according to Mythbusters, that isn't an accurate result. Only the head of the shark (as opposed to its whole body) should have blown apart.
The boat in Jaws is named "Orca," after a species of whale and the only known predators of the great white shark.

The shark has a maximum cinematic impact for minimal amounts of time in front of the camera.

For being the film's titular character and villain, Bruce doesn't actually appear in that much of it. The shark occupies roughly five minutes of screen time.