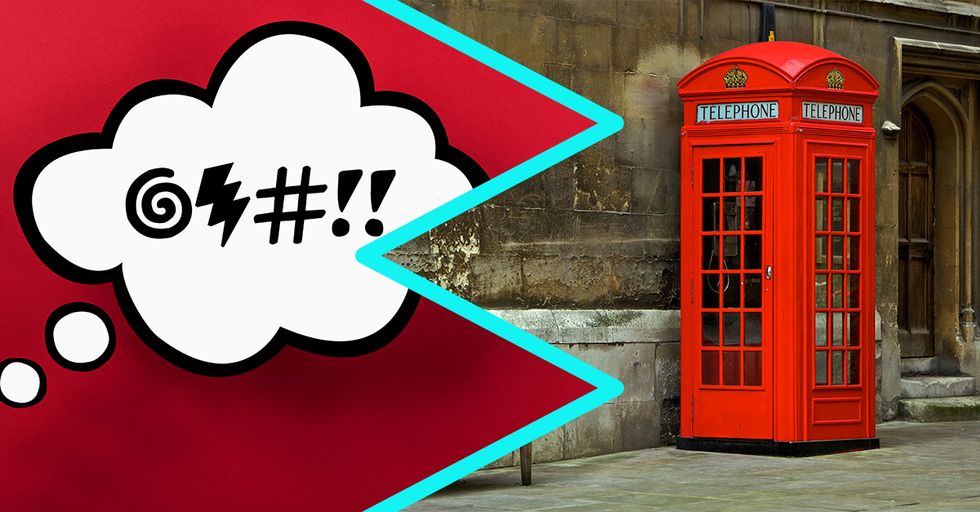 Have you ever watched a British movie and gone – "gee, golly, gosh, I have no idea what in the world they're saying!"

You're not alone. If you've ever been utterly befuddled by British lingo, you may very well be one of the millions of Americans that are stymied by the language of our British cousins. Its even worse with British cursewords, which are truly incomprehensible.

Here's your handy dictionary for understanding them.

See British people are fancy, so instead of ass and assh*le, they decided to add an "r" and make it all difficult, so now here you are struggling to draw out the words.

Originally meant to signify an illegitimate child; now means an unpleasant person or situation. The American equivalent would be the equally objectionable f*ccboi.

This lovely word literally means the end of the penis. Comparable to the American assh*le or d*ck.

An idiot. Don't ask us why.

A super, really horrible and derogatory word for a woman of Arabic origins. Also, a slut, whore or b*tch. Really, this isn't something you want to say in mixed company - or at all...

One of the most stereotypically English expressions ever. An expression of shock or surprise.

An unpleasant person regarded with pity, contempt, or envy. Can be used for someone you feel sorry for – "the poor blighter" – or someone you hate – "that blighter."

A word used to intensify language, similar to the American goddamn. Ex. That bloody blighter pissed me off!

A milder, more archaic variation of bloody. You can use it all you want, but you'll also risk sounding like you dropped right out of My Fair Lady.

Testicles. Also, something unbelievable or stupid - an expression of disbelief.

N. Shit. Adj. Clumsy or inept (as in cack-handed).

N. A very derogatory word for a stupid, sporty, and hip-hop obsessed member of the lower classes. Avoid at all costs.

Adj. Tasteless, tacky or unfashionable. Can also be used as a substitute for f*ck as in "naff of!"

Making fun of. EX: Are you taking a piss?

N. A masturbator or an unpleasant person. This is a mild variant of the word wanker.

N. Vagina V. to hit (I twatted him); to be drunk (I was well twatted last night)

N. A masturbator or an unpleasant person. V. to be drunk (I was absolutely wankered)