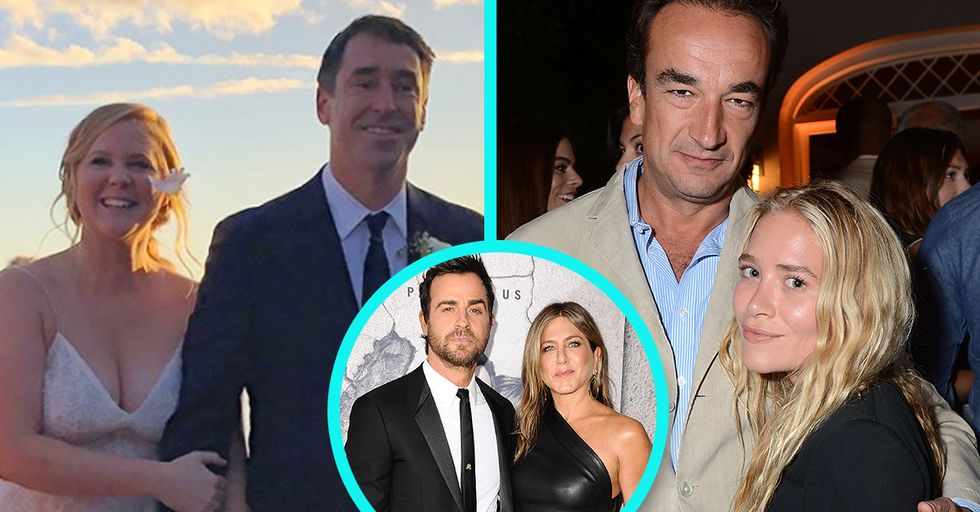 20 Celebrities Who Surprised the World When They Secretly Got Married

Celebrity weddings are a big deal – there's all the juicy details about the dress, the guests, the price tag. Some people spend hours poring over glossy magazines just to make sure they don't miss anything.  So when a celebrity just up and reveals they married when no one was looking, it's a bit of a shock to the system.

Here are the 20 weddings that shocked the world.

Did you hear? Amy Schumer got secretly married to a chef and cookbook author named Chris Fischer.
The pair had been dating for a year, so it was a bit of a surprise when Schumer announced that they were already married. Who knew!

Remember when Angelina Jolie and Brad Pitt said they wouldn't get married until there was gay marriage and then broke their promise?
Well, at least their wedding was gorgeous. It was at their home, Chateau Mirval in France. No one knew except the people lucky enough to be invited.

When actress Kate Bosworth decided to get married to writer and director Michael Polish, no one knew.
The pair tied the knot at the Ranch at Rock Creek in Montana in August 2013. The bride wore not one, but two different Oscar de La Renta gowns for the occasion.

Did you know that the man also known as Deadpool was already married? He and wife Blake Lively got married in a very hush hush ceremony September 2012.
The nuptials took place at the Boone Hall Plantation, and while there are few pictures of the event, we do know she wore a tulle Marchesa gown.

The supermodel and super-athlete had two secret weddings back in 2009. The first was in a small Catholic Church in Santa Monica, California, and the second was at the couple's vacation home in Costa Rica.
It took five years for the couple to actually show pictures from the nuptials and we still don't know who designed Bundchen's gown.

Did you even know Zoe Saldana is married? Turns out she is, to Marco Perego, an Italian professional soccer star turned artist whose works can command over $30,000 a pop.
In a swoon-worthy move, Perego opted to take Saldana's last name. Also, he looks like an Italian Johnny Depp, so there's that.

Pretty much everyone expected Mila Kunis and Ashton Kutcher to get together. And then they did. The That 70's Show alums, who met on the set of the show when Kunis was only 14 and Kutcher was a fresh-faced 20, dated on and off for years.
Then, in 2015, they got married in a top secret wedding... which the press didn't find about until months later.

America's Sweetheart got married and nobody knew! In August 2015, the pair shocked everyone when they got married in a top secret wedding in their backyard.
Only 70 of their closest family members and friends were invited, and all of the details were kept top secret.

Olsen's wedding to banker Olivier Sarkozy is one of the most secretive in celeb history.
It was held in a private Manhattan home, and the 50 guests had to hand over their cell phones before the nuptials could begin. Also, instead of flowers, the couple reportedly had bowls and bows of cigarettes.

Just as the world got to know Margot Robbie, we found of she was married. The Suicide Squad actress married producer and assistant director Tom Ackerly in a wedding so secret guests didn't even know the location.
Phones and cameras were prohibited for the event, which Robbie later confirmed via Instagram with a very pointed picture of her ring.

Did you know Cameron Diaz was married? Honestly, neither did we, but as it turns out, the actress got married to Good Charlotte vocalist Benji Madden in 2015.
The very private Jewish ceremony was done at her Beverly Hills home. “It was a beautiful, heartfelt ceremony," a source told Us Weekly.

The reigning king and queen of pop culture got married in a private ceremony in the groom's Manhattan apartment.
Only forty people were lucky enough to be invited to the nuptials and the ring cost an estimated five million dollars.

When British supermodel Agyness Deyn, who you may have spotted on pretty much every runway ever, had her first wedding to Friends star Giovanni Ribisi she kept things very understated.
The pair married at the County Registrar in June 2012, and family and friends had no idea. Not so her second wedding, this time to hedge fund manager Joel McAndrew in Brooklyn Heights.

Scandal actress Kerry Washington has always been hush-hush about her private life, and her wedding was no exception.
When she got married to 49ers cornerback Nnamdi Asomugha in Hailey, Idaho June 2013, the details were few and far between and they still are.

Here's another Gossip Girl alum that kept her nuptials super hush hush. She married Adam Brody, another teen drama alum, who starred in the four season drama, The O.C.
The pair had their nuptials in a super secret Northern California ceremony. It was, by all reports, gorgeous.

Fashion blogger and model Olivia Palermo married fellow model Johannes Huebl in secret and only broke the news via instagram in June 2016.
True to Palermo fashion, she was dressed to the nines in a Carolina Herrara skirt and cobalt Manolo Blahnik heels.

Neil Patrick Harris and David Burtka were together for a decade before they got hitched in Italy.
The happy couple wore matching Tom Ford suits, and Elton John serenaded them with a few songs.

Amanda Seyfried eloped with actor Thomas Sadoski and no one knew until she broke the news on The Late Late Show with James Corden a week later.
"We just took off into the country with an officiant and, just the two of us, and we did our thing . . . We had a great day. It was perfect," she said.

Rupaul married his longtime boyfriend, rancher Georges LeBar, and no one knew for an entire year.
I’ve never said this on television before but we are married," RuPaul said during an episode of Hollywood Today Live. “We got married on our 23rd [anniversary]. I met him on the dance floor at Limelight in 1994, on his birthday. So we got married on his birthday, the anniversary of when we met, this year."