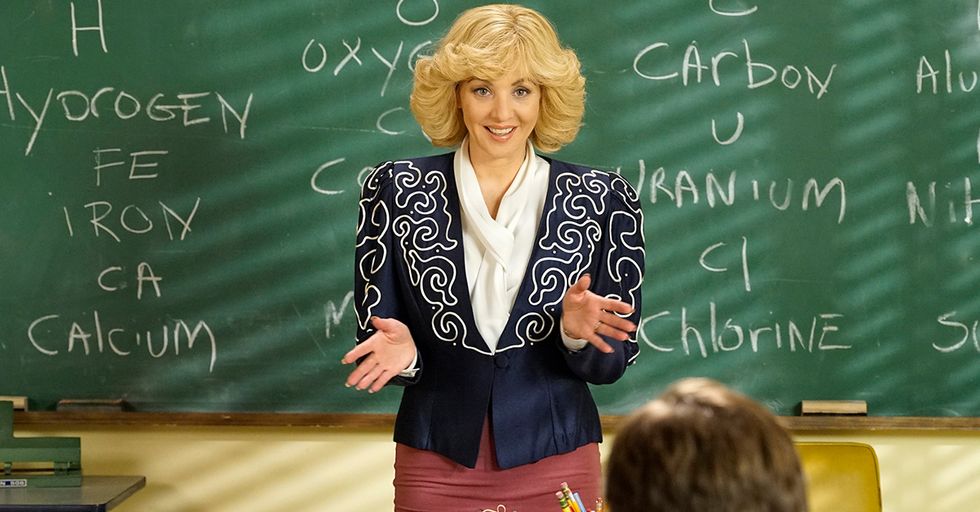 Whether you look back on your time in school with fondness or disdain, one thing remains true for all us; it was a memorable experience.

While some students had it easier than others, prom queens and clarinet players alike have to live with their fair share of cringe-worthy memories.

As the years go by, we're able to laugh at the mortifying memories, after all, we had a pretty good excuse for being so awkward.

And while we can attribute our passed faux pas to adolescence, our teachers lack the luxury of such an all-inclusive excuse. The awkward and often inappropriate comments made by teachers are entirely theirs to live with and eternally ours to cringe over.

Here are 20 seriously cringe-inducing comments by teachers that left their students disturbed, bewildered, and traumatized... forever.

This teacher may have been lecturing about snakes, but the students' response was crickets.

"My creepy old-man science teacher in junior year was talking about how snakes have a bifurcated penis. After explaining it, he looked around and said: "That ought to make you ladies happy." What followed was one of the loudest silences I've ever heard in my life." -Sno_Wolf We're sure these "ladies" were anything but "happy." In fact, we're pretty sure they were never the same. I know I won't be.

This coach's comment took these loudmouth students straight out of the game.

"I was at rugby practice and we were doing stretches and we were all lying on the ground and my friend has his head positioned close to my other friend's crotch. My friend says quite loudly "It looks like you're about to suck my dick." When he realized that our coach (who is also a teacher at our school) heard him, he started to apologize for swearing when our coach says "he wants a meal, not a snack." -Rushton6

This student accidentally found out how his teacher REALLY felt about teaching.

This sex-ed teacher was all about hygiene.

"My sex ed class was taught by our 60-year-old gym teacher. His version of sex ed was to tell us about his first time, on a mattress, in a garage. The remainder of the hour-long class involved him telling us how important it is to take a shower afterward." -Ender_1299

Oh, these students needed a shower afterward alright... but unfortunately, no amount of scrubbing could ever erase this teacher's filthy lesson from their memories.

Here's one way of putting it all out there.

"I had a history teacher in HS; for context, this was in about 1980. To this day, I can't quite recall what prompted this, but he stood in front of the entire class, shaking with rage, and said, 'I am a homosexual.' We were all just dumbfounded. Not that he was gay, I think most of us had figured that out already, but that he felt obligated to make that announcement." -calcaneus

While we admire this teacher's bold act, we question his timing. And his audience. And the shaking rage. We have a lot of questions.

This teacher offered her students some advice they'll never forget, despite their best efforts.

"One day before Freshman English class, me and a few friends were singing 'Ring My Bell' by Anita Ward. Our English teacher walks in, hears us, and asks 'Do you know what that song is about?' And before either of us could answer, 'Duh, sex. It's a disco song,' she says, 'The clitoris. Remember that. It's about the clitoris.'" -eyes_are_grey

We doubt they could forget this teacher's unsolicited advice if they tried. And we're sure they have.

It will always be too soon for this teacher's terrible joke.

"The day after the Boston Marathon bombing there were a lot of absent kids in my tax class. The teacher said, 'looks like we had some students in the Boston marathon yesterday,' in response to there being fewer people than usual.

This teacher really knew how to grab her students' attention.

"Had a female English teacher at the age of 12. Somebody called her 'Sir' by accident, she stood up and screamed (whilst holding onto her boobs) 'DO THESE LOOK MASCULINE TO YOU STEVEN, DO THEY!?! WELL DO THEY!?!' Until he responded that they didn't and then she sat back down and continued the lesson." -Connaitre

Well, now these students know just what to say anytime they'd like a free show. Yet, we have a feeling there was nothing but "ma'am"s from then on.

Students still have nightmares years later over this teacher's dreams.

"I was 9 and I was in a sex-ed class with the other boys of my age. I don't know if this was an Australian thing for primary schools, but we were separated by age and gender for sex-ed for a while. Anyway, the teacher for this class also happened to be our principal. He was easily pushing 70 and had a voice that was a mixture of John Howard and Mayor Pelican from Blinky Bill. He went on to describe wet dreams for us. "Sometimes, you uh, might wake up in the middle of the, uh, night, and.... your, uh, underdaks will be wet." (Why he thought 'underdaks' was a good phrase for underwear is beyond me.) Then came the clincher. "So, when do boys stop having wet dreams?" asked my friend Sam. "Well, never, really. I mean, I still have wet dreams." Hands down, the most awkward, cringe-inducing incident in my schooling life." - Anonymous Now we're all having nightmares tonight.

This teacher slammed this poor student for no reason whatsoever.

"Used to have an alcoholic teacher who, when handing out textbooks, slammed one down in front of a larger boy in our class, pointed at him and said 'don't eat it.' Yeah the kid cried." -wearethefreaks

The lesson: Don't drink and teach.

This teacher mistook her 6th-grade student for her BFF.

"Sixth grade. She told me it was really tough giving her husband blow jobs with her new braces." -unicraven

We're surprised this teacher didn't invite this student over for a sleepover where they could play truth or dare and talk about boys. However, we would not be surprised if this woman was no longer teaching.

"When I was in 11th grade my teacher embarrassed me in front of the whole class. I was talking about being a girl and she said 'are you really though?' I was already insecure about myself (I have a deeper voice and hairy arms, always made fun of by the boys) so this was quite traumatizing." -wetsnoot

Ummm, that was unnecessary. Not to mention bitchy AF. We can only hope that she's not still "teaching" young girls how to hate themselves more than they already do. What a big fat meanie!

This teacher Freudian slipped in front of the whole class.

"One of my teachers said 'look at those nipples' to a girl who was smiling, embarrassed from his slightly creepy attention already, when he meant to say 'dimples.' He left the room and all the students were like 'wtf?'" -PerennialPhilosopher

In the future, in order to avoid this kind of thing, perhaps this teacher shouldn't be complimenting young girls at all. Actually, scratch that. This perv shouldn't be teaching at all.

"One time in Spanish class, a fellow student finished a test pretty fast, my teacher turned to him and she said, 'I hope you're not that fast with the ladies.'" -griffrhines

Maybe she shouldn't be so quick with quips. At least, if she'd like to continue teaching. But something tells us she now spends her days at questionable comedy clubs dropping one-liners instead.

We're not sure this teacher's comment came out as she intended, at least we hope it didn't.

"In 9th grade, a guy in my classroom was chewing gum. When the teacher told him to throw it away, the guy refused to do so. She then said 'Ok, then I'm going to put my finger in your mouth and get that piece of gum and throw it away for you... And you have no idea where my finger has been.'" -NatalieChandler

And we hope we never do.

Speak for yourself, you (insert expletive here).

This teacher let the cougar out of the bag.

"A student in high school hugged a teacher and she came back with 'not until you're 18.'" -Brian_TaylorBT

No student has attempted to hug this teacher since and that's probably for the best.

This teacher thinks she's a comedian, but she's really just a racist.

"French teacher in high school during a lockdown drill. Lights are out, all the class is gathered in one corner. She tells a few to get in the front of the group for 'protection' or some other ridiculous reason. Then tells one kid, 'Just don't smile.' Kid was black." -Capt_Oblivious15 Oh. no. she. didn't. Except she did. Because either she's a racist or she's just an extremely aloof and terrible comic. Either way, she should quit her day job.

This teacher showed her students more than they ever could have expected.

"My 7th grade Home Economics teacher told us she didn't wear underwear and to be respectful and not look when she sat on her desk in a skirt." -orthodoxmom Somehow we doubt this teacher even remotely resembles Sharon Stone. Maybe she should respect her students and herself and put on some damn panties. What a lady-perv.

This teacher was literally asking for it.

"A teacher asked us if we wanted to know why he had sideburns, and everyone was like 'uhhh, why?' To which he replied, 'For tickling ladies' thighs.'" -MikeyPh

Well, I'm officially disturbed. These teachers undoubtedly made a lasting impression on their students. What's your most cringe-worthy memory of a teacher?