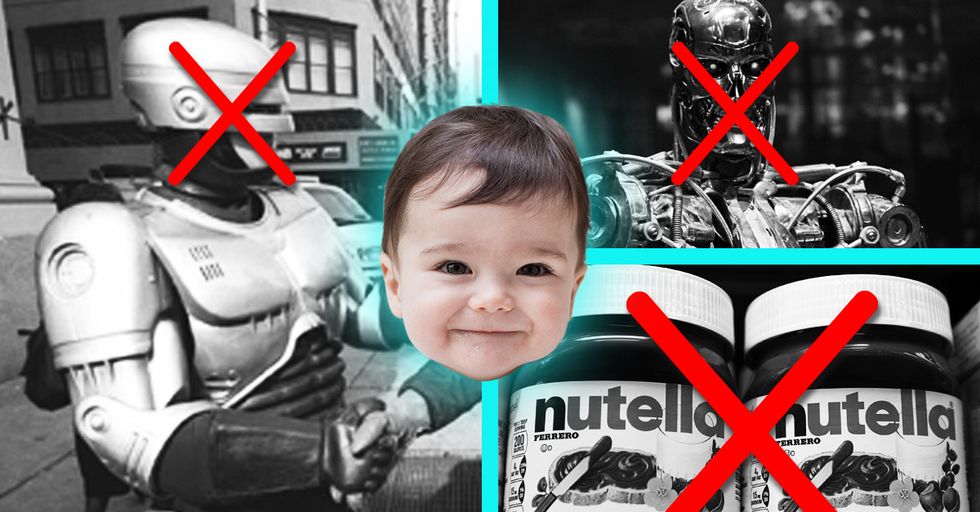 They're a subject of intense thought for every new parent. After all, the name you give your child follows them their entire life. Some names, especially celebrity ones like Blue Ivy, or Apple, are undoubtedly distinctive. Then there are the names that are just plain illegal.

In 2013, a Texas judge ruled that a baby named Messiah must change his name to Martin because "it's a title that has only been earned by one person … Jesus Christ." The ruling was later overturned.

In 2009, a three year old New Jersey resident became the subject of contention when a baker refused to decorate a cake for his birthday. Why? His name was Adolf Hitler Campbell.

It's absolutely illegal to put numerical symbols in your baby's name. You can't for instance, name a child 1069, like someone in North Dakota tried to do.

In California, you can't have accents on your baby's name, so names like Élodie are out of the question.

In the UK, you can't give your baby a name that might be construed as racist or insulting. For this reason, you can't call your child "Monkey."

Chow Tow means smelly head. It's obviously not a very nice name to give a child, but we're assuming someone tried to, which is why it's banned in Malaysia.

A French couple once tried to name their daughter Nutella because they hoped she'd be as sweet as the sugary hazelnut spread. A French judge wasn't sweet on the idea, however, and the couple were forced to change the name to Ella.

Someone actually tried to name their child this. A New Zealand judge, thankfully, said no. Not cool, whoever it was that did this. Not cool...

Akuma means devil in Japanese, and some (Japanese) person, tried to name their child this. The Japanese courts weren't having it, and the name was banned.

Someone in California tried to name their child this – pronounced "Three." Unsurprisingly, the judge said nope, as this was a symbol rather than a name.

11. New Zealand - Talula Does The Hula From Hawaii

New Zealand is not having it with these shady baby names, because when someone tried to name their daughter this, the government assumed guardianship of the child to ensure a better name was found for her.

12. United States - Misteri Nigger (the second 'I' in Misteri is silent)

Obviously a California Judge said heck no, because the name basically amounted to "fighting words." Imagine, for instance, the tumult it would cause if someone shouted those words across the street.

Someone in Sonora, Mexico thought it was a smart idea to name their child Robocop, presumably after the 1987 movie. Thankfully, a judge blocked their attempt.

When Robert William Handley of Ohio tried to rename himself Santa Claus, a judge refused, because:

Chief is a solid name and so is Maximus, so why not put them together, one prospective parent reasoned. The New Zealand judge, of course, said no, and banned the name altogether.

One Chinese couple tried to name their child the @ symbol, pronounced “ai-ta" in Chinese, which sounds very close to the words "love him." A judge ruled yes, but the Chinese government ruled no. Many countries have bans on naming children symbols.

We're going to give this parent from Sonora, Mexico the benefit of the doubt and say they just didn't understand what this name meant. Either way, it's been banned.

Parents can love heavy metal all they want but they can't, however, name their children after heavy metal bands. This is according to a court in Sweden.

Some couple in New Zealand thought it would be cool to name their baby a punctuation symbol. A judge said nah, and sent them on their way.