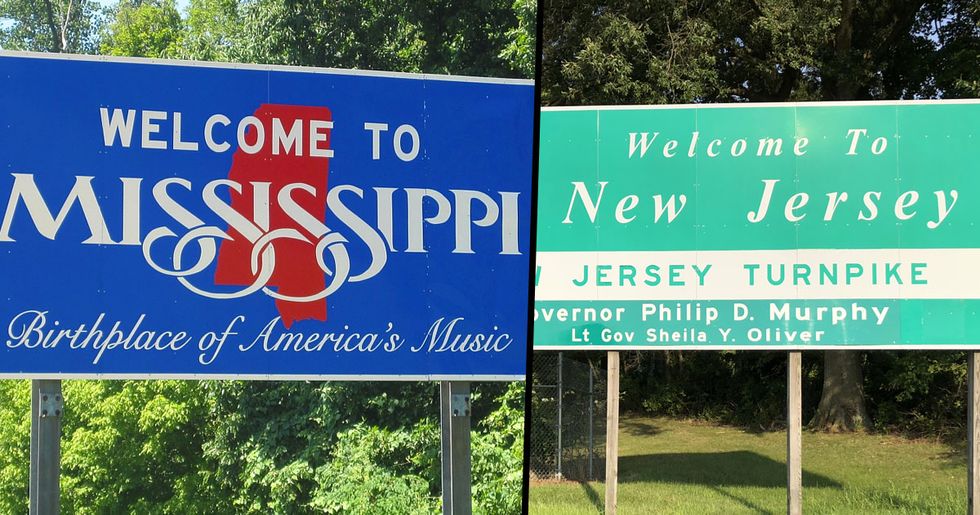 The 20 Least Fun States in the United States

Each state in America is unique and has its own pros and cons, but a recent list released by "WalletHub," means that you can now decide which state you want to call home based on how fun it is. There's nothing worse than visiting a place in which there's nothing to do, so WalletHub has made your life a hundred times easier.

Want to find out how your state ranks? Have a read of twenty of the least fun states in the United States right here!

How do you even calculate which states are '"fun"?

You might think that it's a subjective matter, but WalletHub has taken into consideration five key factors including affordability, economy, education, health, quality of life, and safety, which allowed them to form a base on which they could build their results.

But let's start with the good news!

Here's the top end of the list. These are the top 5 most fun states in all of America.

In at number 5, we have Colorado. Known best for its love of beer and its legalization of weed (for recreational use!), the state is perfect for those that are looking to have a good time while enjoying the view.

The only state to be named after a President, Washington came in at a nice, comfortable spot on the list.

Of course the "Big Apple" would be up in the top 5! Many people actually claim that New York is the greatest city in the world.

Just missing out on the top spot there. Florida came in at number 2. The Sunshine State is best known for its great weather and, of course, Orlando is home to one of the world's most popular tourist attractions, Disney World! I'm actually surprised that it didn't steal the top spot.

Despite not ranking high in the "nightlife" aspect of the survey, California managed to grab the top spot for its buzzing hub of entertainment and abundance of things to do. It beat Florida by three points.

Surprised? So was I.

Here are some honorable mentions. Nevada made it to 6th place, even though most of us would have thought it to be in the top 3, and Minnesota, Pennsylvania, Oregon, and Texas also managed to secure their places in the top 10.

Onto the main event. Here are twenty of the least fun states in the US.

Please don't be too disheartened if you see your state on this list. It's nothing personal.

If you visit South Dakota, make sure that you take a packed lunch because this state ranked forty-seven out of fifty for the fewest restaurants in all of America.

The home of the potato. That says enough, don't you think?

New Jersey lacks entertaining things to do, so it came in at number eighteen on this list. I do have a soft spot for the accent though.

Besides being a "hot BBQ state," apparently, there aren't many other things to do in Kentucky, compared to all the other states.

Even though it ranked pretty well in the nightlife aspect, everything else about the state brought it all the way down into the list of least fun states.

"The Treasure State" is known for its national parks... but that seems to be all.

Maine is pretty popular for its beautiful botanical gardens and ski slopes. It's too bad that it didn't rank higher on the overall list.

Nebraska ranked twenty-five for its nightlife, which is pretty good. But it all went downhill from there because it was then ranked forty-one overall for entertainment and recreation. I don't think that I'll be visiting the state any time soon...

I mean, besides the fact that it's illegal to sell alcohol on Sundays, Indiana seems pretty nice, right? Well, compared to the next lot on the list, it is, but overall, it ain't all that great.

Let's kick off the top ten with Kansas, because, apparently, it's just as boring as it sounds. At least it has sunflowers, that's one good thing, right?

This state fell to the bottom of the list when it came to state and local expenditures and its ranking for nightlife was just as bad, coming in at forty-nine out of fifty. I'm slightly disappointed because New Hampshire is the home to some of the finest comedians including Seth Myers and Adam Sandler.

Connecticut ranked pretty badly in almost all aspects of the survey, ranking forty for nightlife and forty-three for entertainment establishments.

I would have expected Alabama to rank in the top five least fun states if I'm being honest. Besides passing problematic laws, it ranked forty-four when it came to entertainment and recreational purposes. And I might as well add, it was hard to find a flattering picture of the state... sorry, Alabama!

According to the WellHub reports, the people of Arkansas hardly spend any money on "fun" things. Well, anything with "Kansas" in its name isn't going to do well, is it? At least it was an aesthetically decent state in comparison to Alabama. That counts as an achievement, I guess.

I always forget that Vermont exists. It ranked very low for entertainment and nightlife, so you're better off visiting a different place to save yourself the boredom. It's nicknamed The Green Mountain State, and rightfully so, because there's hardly anything else there.

I thought that Rhode Island would do better, but, sadly, its come in at number four. It did rank high for most marinas per capita, though.

I'll tell you what you're definitely not going to "discover" in Delaware, and that's nightlife. According to WellHub's stats, Delaware ranked dead last in that aspect.

Just missing out on the top spot is Mississippi. But even then, coming second in this list is just as bad as coming first. Mississippi has the lowest rate of arts and entertainment establishments.

According to Insider, West Virginia is brimming with ghost towns. It has the fewest entertainment establishments, the fewest fitness centers and the lowest rates of spending on recreational activities. No wonder it got first place on the least fun list! Right, so I know where I'm not going to visit.

There we have it!

That brings us to the end of our list of the least fun states in the US. Some were slightly surprising, but I think that WalletHub got it all just about right. What do you think?