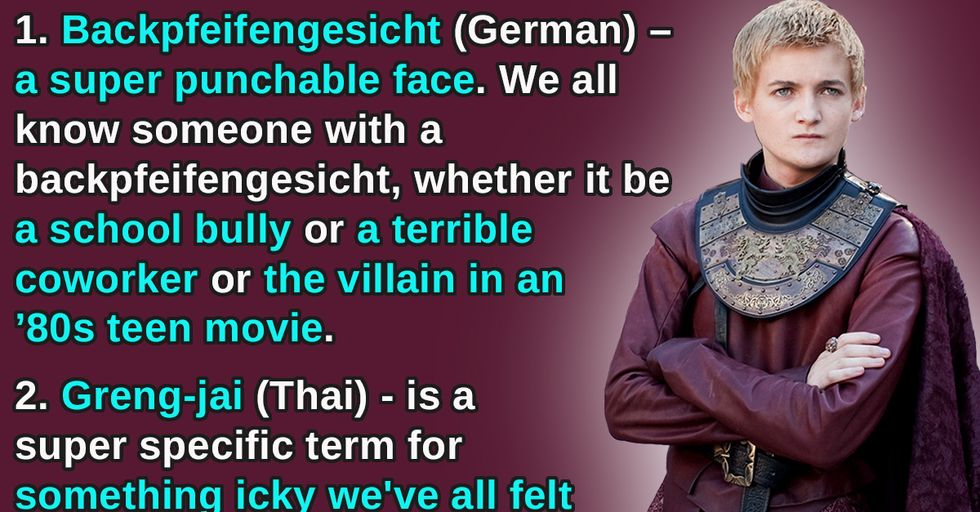 In addition to English being one of the most inconsistent, hardest languages to learn, it also doesn't have a word for everything. Sometimes, words in other languages are just more adept at explaining feelings we all experience.

These foreign words should become part of your vocabulary ASAP for their utter usefulness.

Are you also 100 percent comprised of kummerspeck? No? Just me?

It's a good thing there's a word for this, but I also wish there was a word for that feeling when you definitely do remember someone's name but you don't want to say it because you only met them once a long time ago and you can't decide if it would be impressive or creepy if you remember their name. That's my problem.

Mamihlapinatapai (Yaghan language of Tierra del Fuego) – the look shared between two people when both want the other to do something they both want, but neither want to do first

This is such an unspoken feeling that everyone has experienced at one point or another. I call it the "No you hang up first!"

Pelinti (Guli, Ghana) – to move hot food around in your mouth

You know when you just cannot wait for the lasagna to cool down, so you take a big bite even though you know it's way too hot, and your mouth can't handle it so you juggle it around in your blistery mouth until you can finally swallow it without burning your esophagus? Yeah, that's pelinti for you!

Yuputka (Ulwa) – the phantom feeling of something crawling on your skin, like when you're walking alone in the woods

The most common experience of yuputka for me is when I'm lying in bed and suddenly I see a spider, so I jump up and of course, the little bugger disappears. I can never find him, but I have to get back into bed, so I just spend the whole night feeling like I'm being crawled on by ghost spiders.

This beautiful onomatopoetic word is the perfect one to describe chattering teeth. Although, do your teeth chatter in rage? Because I would like to see that happen to someone...

Lagom (Swedish) – just right (not too much, not too little)

Goldilocks is perhaps the most high-profile character who was constantly on the search for all things lagom. Although I do think we're all searching for a little balance and stability in life, no?

Welcome to LA where every single coffee shop is full of Seigneur-terraces who are all working on their screenplays that they are convinced are going to be the next big thing.

There are a lot of wonderful Yiddish words that describe things we don't have words for in English, like meshuggeneh and kvell and oy gevalt. But luftmensch is a good one too.

Raise your hand if you are tsundoku master. Yeah, me too.

Sobremesa (Spanish) – happy, relaxed conversation that you partake in after a good dinner and drinks with friends

This just sounds delightful. I'm glad that the word for this is a Spanish one — it just seems so warm and embracing and delicious, just like the rest of the language.

Shemomedjamo (Georgian) – translates to "I accidentally ate the whole thing," when you're really full but you can't stop eating

It's called "cute aggression" and every single one of your grandparents have it. Isn't it just the worst?

I'm sorry. I know this is the most disturbing GIF that there ever has been. But I just had to.

I don't know if I know anyone who actually scratches their head when they're trying to remember where they put their keys, but in any case, there's a word for it, and it's fun to say!

There's another word for this. It's called Jewish guilt, and I have lived my whole life with it.

Remember when you were little and it was almost time for your friend to show up for your play date and you were just bursting with excitement?! This Inuit word perfectly captures that feeling.

Koi No Yokan (Japanese) – Upon meeting a person, the immediate feeling that you two are going to fall in love

This might seem like stuff reserved for romantic comedies, but apparently, it happens so much in Japan that they needed their own word for it. Well good for them! No, really, I'm happy for them.

Zeg (Georgian) – the day after tomorrow

Not the movie, but the actual concept. English has the word "overmorrow," but you probably don't use it unless you wear a top hat and a monocle. Zeg is way cooler.