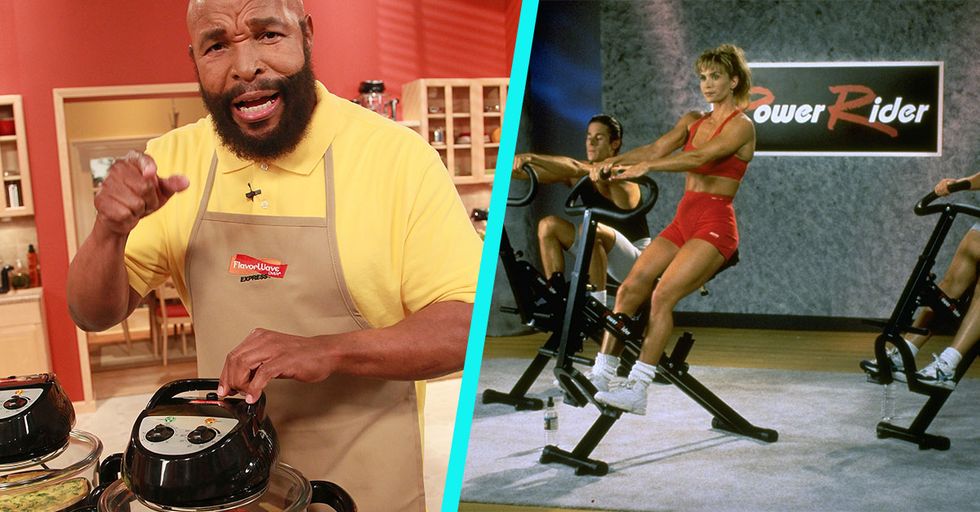 We've all had those nights.

You know, you're up way later than you ever expected to be. You're flipping through the channels, wondering why you ate so many chips this late at night, when — BAM! — you're hit with the weirdest, strangest, most insane infomercial, and you're truly amazed.

Infomercials are an art of their own, and thanks to Twitter user @tatehill and his thread of infomercial GIFs, we have the best moments preserved on this thread.

You could walk right into a coffee table! And then break it and fall flat on your face.

Listening to music becomes a test of strength.

Suddenly, you can't listen to music unless you can lift it! Like this grandma. She could totally kill some reps in the gym.

Putting away leftovers is hard.

Get the meatball! Look at that thing go!

When you have no patience for blending...

...So you throw it out the window! Honestly, we feel like doing this quite often.

You will never open a cabinet again.

How does this happen?? Who has that much Tupperware in their kitchen? Keep reading for more ridiculous GIFs.

Wait. What caused this?

Everything literally just tumbles over. We can't stop laughing! Beware of the floor!

Camping will never be the same.

Camping trips can be fun. But when your parents force you and your siblings to wear Snuggies... ...Ummm, no thank you.

What was her endgame? It's truly intriguing to watch this GIF over and over again. What exactly was her plan with this?

Having a snack is no easy task.

But make sure you still try to eat the popcorn! Even after you make a mess and drop the cup.

Nobody could hold the flashlight for her?

Instead, her husband straight up laughs at her! He could've helped her! This is a tragedy! The lady is just trying to eat her meal!

If you try to blend something without a lid, whatever happens next is totally your fault.

You've earned the mess in your kitchen. That is all on you.

Does that pillow have superpowers?

Why is it glowing? Is he injured? Why is he so angry? So many questions that desperately need answers.

Get this woman an Oscar for that performance!

Her reaction shot is Meryl Streep-level of acting. What a dream. Also, who knew opening a pickle jar could be so dramatic?

Being on a computer is STRESSFUL!

The sheer panic on the mom's face is everything. We're loving the pink and purple Polo shirts!

This makes us uncomfortable.

It looks like they're cutting bread with a slice of cheese. It's mesmerizing and disturbing. The GIFs will never end...

How tight was her shoe?!

That man was catapulted into oblivion. If you're ever having a bad day, just watch this GIF on loop.

Did he start pouring with the milk lying flat on the table?

Because that's what appears to have happened. Poor kid. Hope someone helped him out so he could eat his cereal.

She knew that soda was going to spill.

It looks like it was her agenda all along. She always knew she wanted to aggressively pour cola into her family's cups.

Has she ever used a towel before?

Homegirl is seriously confused. Hopefully she figured it out? Also, you know all those times when you need to put a towel over your bra? Classic!

Walking down the stairs can be life threatening.

No, seriously. Be careful when you walk down any flight of stairs. You can literally tumble to your death.