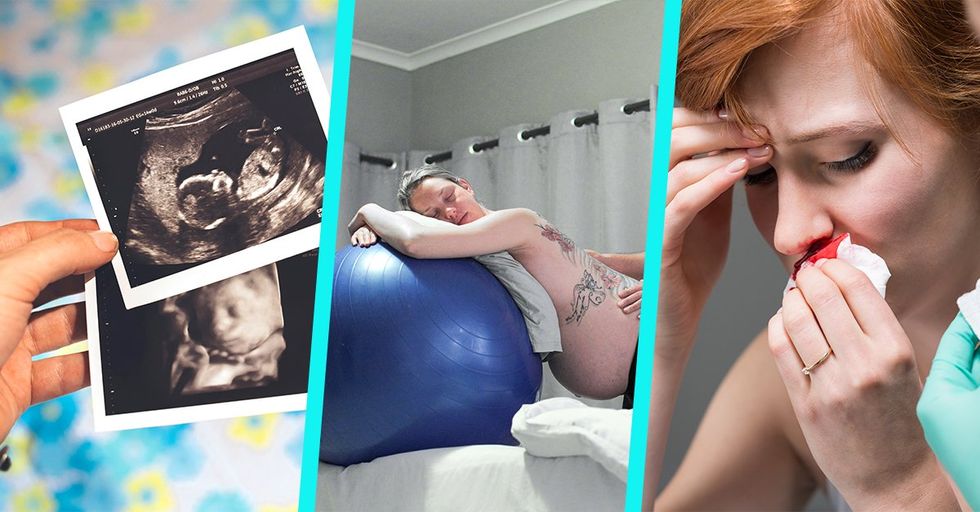 To say that pregnancy is an amazing experience is an understatement. The changes a woman experiences during pregnancy impact every aspect of existence. Her body, mind, and heart are all completely hijacked by the miracle of life. Sometimes these changes come as a bit of a shock for expectant moms, so we've gathered the most bizarre facts about pregnancy to both enlighten and prepare you for the wild ten-month ride that is pregnancy.

1) While everyone and their mom thinks that pregnancy is nine months long, it's really ten.

If you're a first-time mom, you have every reason to believe that your pregnancy will last nine months, give or take a week or two, considering this "fact" is often considered common knowledge. However, your doctor will determine your ideal due date to be forty weeks from the first day of your last menstrual cycle. Technically the first two weeks of pregnancy you've yet to conceive. In 2013, the American College of Obstetricians and Gynecologists and the Society for Maternal-Fetal Medicine, officially changed what’s considered a full-term pregnancy. The Today Show explains, "While 37 weeks has been considered full-term up until now, 39 to 40 weeks is the new definition (37 to 38 weeks will now be considered early term). Late term is now 41 to 42 weeks, and the poor unfortunate souls still pregnant past 42 weeks will be classified as post-term." When you add it all up, you've got a total of forty weeks of pregnancy. While the first two weeks of pregnancy may seem gratuitous, let me tell you, the last two weeks of a full term pregnancy are no joke and each gloriously uncomfortable moment counts. 40 weeks, people. Do the math.

A woman's brain shrinks during pregnancy and takes up to 6 months after giving birth to regain its full size.
— Facts of Life (@Facts of Life)1517731249.0

According to Facts of Life, "A woman's brain shrinks during the third trimester of pregnancy and takes up to six months after she gives birth to regain its full size." So when you find yourself furiously searching for a diaper for fifteen minutes while you've already got one in your hand, or driving away with the diaper bag on top of the car, know that it's just your "mom brain" messing with you. Not only are you sleep deprived, but your brain is missing much-needed brain cells. Don't worry; they'll be back. For six months, you officially have a legitimate excuse for any airhead moments or lapses in memory. Don't hesitate to pull the "mom brain" card as needed.

3) Your heart grows, and not just in a cheesy metaphorical way.

During pregnancy, a woman's heart increases in size so that it can pump the extra 40-50% of blood she has running through her veins. And it doesn't just grow bigger; it beats faster, too. The walls of the ventricles thicken to pump the extra blood which allows the heart to beat more often without overexerting itself.

4) Your baby can taste the food you eat during pregnancy.

According to News Scientist, babies in the womb can taste the food their mothers consume during pregnancy and tend to prefer these foods for the first few days after birth. So maybe go easy on the hot sauce, yeah?

Are sex dreams common during pregnancy? Cause Ryan Gosling just gave me the best 8 hours of "sleep" ever. He's welcome in my dreams again.
— Bella (@Bella)1487431247.0

6) Many women experience bleeding during their healthy and successful pregnancies.

Implantation bleeding, swollen capillaries in the nether regions, and even an inflamed cervix can cause bleeding during pregnancy that is non-threatening to your little bun in the oven. I should know. I experienced bleeding throughout two of my successful pregnancies due to a rare pregnancy complication called "subchorionic hematoma." While my personal experience with pregnancy bleeding was on the more serious side and did raise some concerns, I now have two little humans destroying my house as I type this, so try not to freak out if you notice some spotting. Call your doctor and know that everything could be just fine. *This fact requires a disclaimer: any bleeding during pregnancy warrants an immediate call to your doctor.

7) It's possible to get pregnant while your already pregnant.

Pregnancy Magazine reports that, while extremely rare, it is possible for some women to conceive while already expecting. This rare phenomenon is known as superfetation; when a woman continues to ovulate during pregnancy. The result is two babies with different due dates. While it's technically possible, there are only ten reported cases of superfetation on record.

8) Twins come in many forms.

There are seven types of twins, to be exact. While fraternal and identical twins are the most common, the five other types include Half-Identical, Mirror Image Twins, Mixed Chromosome Twins, Superfecundation, and Superfetation, and are extremely rare.

9) Tall women are more likely to have twins.

According to a 2006 study by Dr. Gary Steinman, taller women are more likely to conceive twins. Scientists believe that insulin-like growth factor could explain the link between height and twins as it has been positively identified to affect both genetic traits.

10) A fetus has fingerprints.

11) The uterus is stretched to 500 times its normal size during pregnancy.

Your uterus, once roughly the size of a peach ends up being the size of a watermelon by the end of pregnancy. But equally surprising is the fact that after giving birth, your giant watermelon uterus returns to its original size in only six weeks time. This process is known as involution. Talk about getting back into shape!

12) The biggest baby on record weighed a whopping 22 pounds.

According to the Guinness Book of World Records, the heaviest baby on record weighed 22 pounds and measured 28 inches long and was born on January 19th, 1879 in Seville, Ohio. And I thought giving birth to a 9.5 lb baby was rough.

14) The longest pregnancy ever recorded lasted over a year.

375 days, to be exact. Let's all pause for a moment of silence to recognize Bella Hunter, the poor 25-year-old woman from Los Angeles, who endured an extra two months of being EXTREMELY pregnant. She deserves a statue in every maternity ward.

15) Nosebleeds are a common pregnancy symptom.

Bring some tissue and not just for crying. Nosebleeds can show up right from the start of pregnancy. Baby Center reports that 20% of pregnant women experience nosebleeds, compared to only 6% of non-pregnant women. The culprit: expanding blood vessels inside the nose combined with increased blood supply.

16) You might leak breastmilk upon hearing your baby cry.

According to Dr. Viehmann on Parents.com, "Anything that makes you think of your baby, like saying her name, talking about her, or even hearing another baby cry, causes your body to release oxytocin. It's the same hormone that helps women bond with their babies, but, at times, a surge of oxytocin can cause lactating moms to leak.

17) Your uterus plans ahead.

Braxton Hicks Contractions are your body's way of preparing for the big day, and they are perfectly healthy. In fact, they're a good sign. American Pregnancy explains:

Braxton Hicks contractions can begin as early as the second trimester.  However, they are most commonly experienced in the third trimester. When this happens, the muscles of the uterus tighten for approximately 30 to 60 seconds, and sometimes as long as two minutes.

Unless your contractions are consistent and painful, you're most likely just joining your body on a test-run. But if you've got any concerns, always give your doctor a call.

18) Nipple stimulation is scientifically proven to bring on labor.

More respectably known as the comfort technique, nipple stimulation is the only scientifically proven method of initiating labor. Once again, you have oxytocin to thank for getting things going.

19) Your baby will be so cute you will want to eat them up, literally.

It's called cute aggression, and it's an odd psychological phenomenon originally credited in 2012 to Yale graduates, Rebecca Dyer and Oriana Aragon. "It might be that how we deal with high positive emotion is to sort of give it a negative pitch somehow. That sort of regulates, keeps us level, and releases that energy," Dyer explained in an interview with  Live Science. Good to know we aren't just all psychopaths.

20) Orgasms are more intense during pregnancy.

That's right, ladies. You just might get more bang for your buck in the bedroom while your pregnant. You can thank the increased blood flow downstairs for the afternoon delight. Discomfort and sacrifice are inherent to pregnancy, but we can't say that it doesn't have it's silver-linings. Not to mention, you get a beautiful baby at the end who makes every single weird symptom worth the wild ten-month ride.