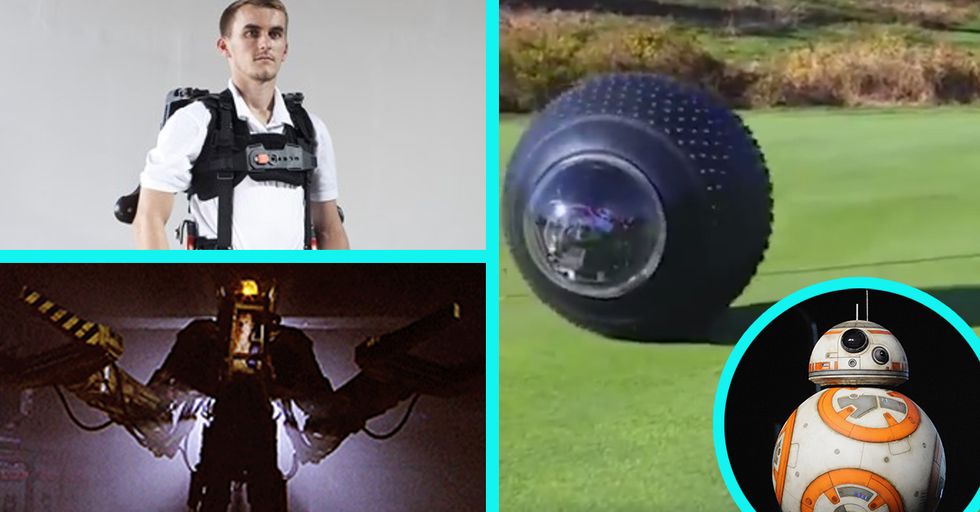 20 Super Futuristic Kinds of Technology Predicted Ages Ago by Movies

This week, pictures of a strange new contraption called the guardbot started floating around the internet. Touted as a surveillance robot that can roll over land, water and snow, it's the latest in a string of new robotic innovations. There was only one thing - people were sure they'd seen it before. In fact, it looked suspiciously close to the BB-8 droid of Star Wars: The Force Awakens fame.

The link between technology and films is nothing new. Each one inspires and helps feed the other. In honor of the guardbot, here are 20 pieces of technology that were predicted by movies.

We can't just talk about the Guardbot without showing you what it looks like. With it's round body and the way it rolls through every obstacle, it looks just like adorable little BB-8.
Everyone on the internet seems to think so, and there's even a Twitter Moments dedicated to just how similar the two bots are.

In 1990, Arnold Schwarzenegger had to depend on self-driving cars piloted by robots as he went on an epic journey to discover his true identity.
Now, self-driving cars are a reality. Google, Waymo and other tech companies are already testing them, and they'll be on the road everywhere within six years. Say goodbye to car culture and hello to complete automation.

Remember Pacific Rim, the 2013 movie about giant human-piloted mocha robots battling Kaiju - gigantic monsters from another dimension?
Turns out, mecha are already here. Japanese company Suidobashi Heavy Industry and Boston-based MegaBots are already making mecha. And they're even dueling already. Turns out all those anime about mecha were onto something.

On the subject of robots, remember the power loader in Alien? The one that Ripley used to take down the Xenomorph Queen?
Well, turns out it's already here. There's several different types of robotic exoskeletons already being made – each one dedicated to giving its user greater strength and ability. Some are even geared to helping the crippled walk again. Technology, aye?

In 1966, Star Trek: The Original Series introduced the Tricorder, a device that recorded and analyzed information, and even had sensor scanning.
Sound familiar? Well, if you've ever used a smartphone or any portable handheld device, you've used something pretty similar to a Tricorder. Then again, Star Trek is pretty revolutionary when it comes to new technology.

Take the tractor beam. Who can forget all those moments the ship got caught by a larger ship's tractor beam. Would you believe us if we said the tractor beam is already becoming a reality?
Turns out, scientists have figured out a way to create a real life tractor beam using sonic waves, which can "pull, push and pirouette objects that levitate in thin air." The technology is only in its infant stages, but who knows what'll happen in ten, twenty years?

Remember when they made dinosaurs come to life in Jurassic Park? That scene where a baby dinosaur hatches is one of those classic cinema moments.

What if we told you that scene had become a reality? Well not the hatching, per se. And not a whole dinosaur. Scientists accidentally made a chicken embryo with a dinosaur-like snout – a modern version of a Velociraptor. They didn't hatch it for obvious reasons...

One of the coolest things about 2002's Minority Report was the way Tom Cruise kept touching the screen and making things appear and disappear.
Wouldn't you know touch interface quickly became a thing of the present? Now it's everywhere around us, but in 2002, it seemed an impossible new technology.

Remember that scene in Minority Report where the cops use spider drones to search out a wanted criminal?
Well now drones are everywhere, and they've become so commonplace that laws have been made to address their ubiquity.

2001: A Space Odyssey was a film well before it's time, and one of the seemingly brave new technologies it featured was video calls.
Now everyone has access to video calls with their cell phones and computers, and companies that primarily focus on them like Skype have to diversify because it's pretty much everywhere.

"Help me, Obi Wan Kenobi, you're my only hope." With that one message, holograms became the dream of every member of the nerd-sphere and geek community.
Now holograms are here, helping revive such beloved stars as Tupac for duets and concerts. It won't be long now before they're everywhere.

Is there any film more unlikely than Airplane II: The Sequel for predicting new technologies? Well predict new technology it did, because the comedy featured a then-improbable new technology that allowed airplane security to peer through the clothes of would-be travelers.
Three decades later, full body scanners are a thing of the present, and one of the bête noires of travelers everywhere. Who doesn't dread all the things you have to do just to get ready to step into one of those things – or the idea that the airport guards are perving on you as you do.

2001: A Space Odyssey was a groundbreaking film on several different fronts. One of those was the character Hal, an initially benevolent artificial intelligence that becomes malevolent over time.
The most direct successor to Hal is Siri, Apple's digital assistance. Unlike Hal, Siri lives in everyone's pocket. Let that sink in.

14. Wearables - Back to the Future

One of the many, many technologies the very excellent Back To The Future predicted is wearable computing.
Now, wearables are everywhere, from the sorta creepy and invasive Google Glass to the Oculus Rift, the computers of the now are all wearable.

The moment the DeLorean Time Machine blazed across the screen, a countdown began as to when flying cars would blaze across the skies.
Turns out, they're already on their way. The CEO of Kitty Hawk, a company backed by Alphabet (Google) CEO Larry Page, says that flying cars will be in the air in five years. They've even tested a prototype already. Ain't science cool?

16. Hoverboards - Back to the Future

One of the most envy-inducing pieces of technology in Back to the Future was hoverboards, flying skateboards teens used to jet across the air.
In 2013, self-balancing scooters or "hoverboards" were invented, and they quickly became all the rage. They weren't real Hoverboards, though, as they couldn't levitate. Now, inventor Franky Zapata has created a real flying Hoverboard that accelerates up to 80 mph. For now, it's being considered for military technology, but who knows what'll happen in the future. If you do want one, however, all you need is a cool $250,000.

One of the coolest scenes in Star Trek is the beginning, when a young James T. Kirk races across a field in a hoverbike. And of course, you remember that iconic speeder bike chase in Star Wars Episode VI: Return of the Jedi.
Turns out, almost that exact same bike is already in existence with a workable prototype. The company is now seeking investors to get it out on the roads.

Ah, The Jetsons. The cartoon depicting the family of the future pioneered several of what would become everyday devices. One of the most practical of those was the robotic vacuum.
Well, if you've ever seen a Roomba, you've seen almost the exact same thing The Jetsons cartoon pioneered in 1962.

Weird Science was one the best and weirdest movies of the 80's. Following the adventures of two nerds who bring the girl of their dreams to life, Weird Science stands the test of time. So, strangely, does it science.
No, we can't actually 3D print a real woman, but we can 3D print a lot nowadays. People are even 3D printing prosthetics in the comfort of their own home now.

The Jetson family not only had their talking dog Astro, they also, once upon a time bought a robodog named Lectronimo. Suffice to say, things didn't really work out. But it was one of the earliest fictional versions of robodogs out there.

So this Boston Dynamics bot can open doors for its friends. The question is: Are they escaping, or going somewhere… https://t.co/1ayKdNDvt4
— WIRED Science (@WIRED Science)1518481500.0

Wouldn't you know that Boston Dynamics, the sinisterly named company behind a ton of equally creepy robots has its own version? Their newest opus is called Spotmini, and its a robotic dog that can open doors. Let the horror of that sink in...