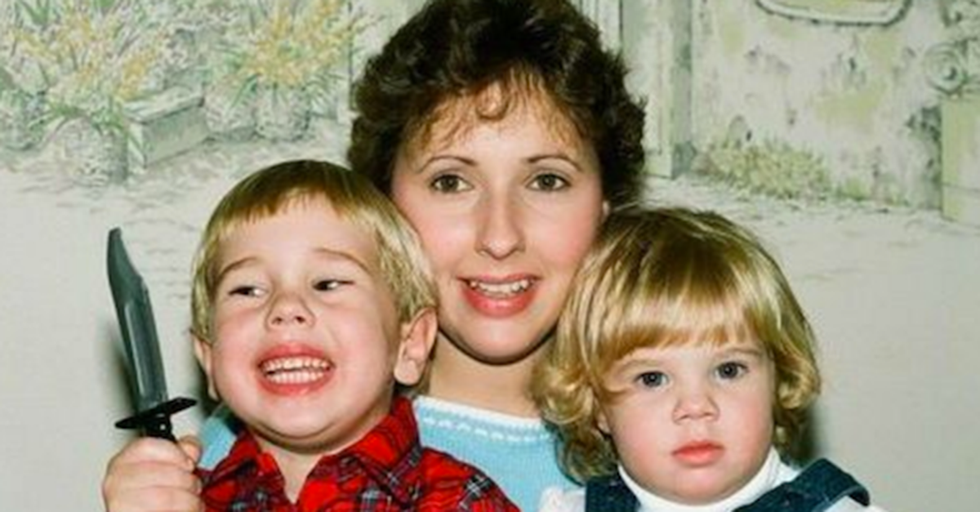 Getting your kids to sit still during family photos is an art form that most parents never master. Fortunately for us, we get to see their failed attempts at heartwarming memories in this gallery of photo shoots totally and completely ruined by kids who just had to have their own way.

Their faces say "whatever the opposite of 'joy' is." Oh yeah, that would be sadness. They're sad.

I guess there is something worse than having your baby cry during a photo shoot. Not only did this kid puke, but look at how happy he/she is at the work they did!

Sure, the parents look happy at the news.

But look at the girl holding the sign. She looks totally and completely over it. She knows that three's the magic number and the family should stop there.

This clearly wasn't a formal shoot or anything, but maybe you could Photoshop that kid to be facing the right way? Also, get a little closer together, guys. You look like strangers!

Three types of kids in this vintage photo.

You've got Angry Kid, Crying Kid, and Nose-Picking Kid. I'm not sure which one I would pick if I had to. They all look problematic in their own special way.

Nothing screams "family dinner" like a seven-year-old in a karate outfit showing off his moves in a wood-paneled restaurant. Enjoy your meal, folks.

I think that's a son. It could be a girl. It's hard to tell with newborns. Maybe Mom should have waited a few weeks before scheduling these photos.

A familiar feeling, no doubt.

As a kid, family photos are a) awful, and b) make no sense. Why would anyone subject themselves to this AND pay money for the hassle? This kid clearly objects.

I sorta feel bad for these parents. Not only are these kids expressive, but it's clear they're not ashamed to share their emotions even if no one asked to see them.

via: Waste of Time

Even in Japan, a country built on quiet respect, kids play by their own rules. I wonder if the parents are keeping straight faces for decorum or if it's because they're going to kill him.

There's one explanation I can think of here.

Maybe these aren't the kids' real relatives? I mean, kids are so awful during photo sessions that you could take kidnapped children in for an appointment and they wouldn't be any worse to deal with.

What's wrong with this picture?

As you can see, none of them feel TOO bad about this. I guess it's just an understanding family...that will never, ever be able to potty train their kids.

The older kid gets it.

You don't have to reach middle age to realize you don't need to sweat the small stuff. Sometimes, the easiest solution is to just grin and bear it.

Well, what did you expect when you put lipstick on the boy?

Look at him. He's clearly deranged. And why on Earth would anyone have a knife on hand for a picture? Even if it's just a casual one inside the house...weird.

As weird as all of this is, there's something front-and-center that's far weirder.

Why is there a couch in the woods? And not like a folksy, plaid one, but a black leather Miami Vice-style number? That's the weirdest thing about this photo.

I guess if you want to get a picture that really captures what the family dynamic is like, then this is pretty spot-on. I wonder if he did anything to earn that sentence or if it's just for the sake of the pic.

This photo really shows off a good percentage of what it's like to be a parent of four rambunctious kids.

It's not often that family photo captures a true disaster as it unfolds, but let's hope this poor kid didn't really tumble off a bridge. Because...things don't look good for her in this pic.

Wrestling the children into frame.

It looks like the mom got dealt a better hand with the two obedient kids, doesn't it?

Sure, it's always the kids that are lying down, but I'm sure the parents feel like collapsing as well. At least they got some funny pics out of the experience!