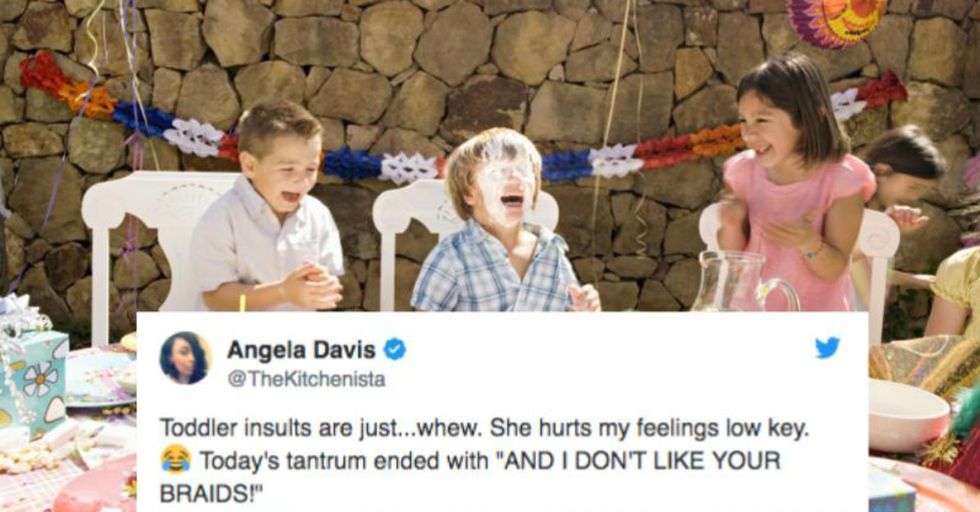 Children are a blessing. They fill your home with love and laughter and turn you and your partner into a full-blown family.

They can also be really, really mean.

And while it may not be a barrel of laughs for their parents, hearing about their crushing insults makes us all feel a little bit better about our own encounters with sassy little ones.

Toddlers have a flair for insults that no adult could ever top.

Toddler insults are somehow both hilarious and devastating, and being burned by a kid is 100 times more frustrating than being burned by an adult, because you can't throw an insult back. Well, you shouldn't, anyway. We're sure some parents have been pushed to the edge a few times.

Angela Davis, aka @TheKitchenista, is mom to an adorable little one...

...who also happens to be a ruthless hair critic. We bet Davis would have loved to scream back "WELL I DON'T LIKE YOUR STUPID HAIR BOWS!"

Ouch! This one had to have stung.

Leave it to a kid to say the (horribly mean) thing that an adult never would. While this type of honestly is refreshing, it's a hard pill to swallow. Seriously, though, that kid is a jerk.

Parenting experts claim that we should be nurturing our kids' self-esteem so they'll grow up to be confident, capable adults, but this kid seems like she could stand to be taken down a peg or two.

And with one comment from a toddler, this man was forced to reevaluate his entire relationship.

We think this man is a hero for playing hide-and-seek for even a short amount of time. We all know it's the worst game ever invented.

It'd be hard not to laugh at the "puffy butt" comment...

...while at the same time crying. We're guessing this mom invested in a more powerful skin-care regimen soon after the first few blemish comments.

This kid clearly doesn't realize the benefits of his aunt living closer to him.

@TheKitchenista @thetrudz I moved interstate to be closer to my family, and my nephew told me recently "Things were… https://t.co/mWPndoTeR0
— climate stripes (@climate stripes)1510812432.0

At the very least, it means more birthday presents and holiday gifts. Come on, kid. You've gotta look at the big picture.

First of all, rude.

Second of all, this is a great opportunity to teach this kid what is appropriate and what is not appropriate to say to someone right after they've given birth. "I'll watch the baby while you take a nap" is pretty much the only acceptable comment.

This kid is savage. Hopefully her husband was able to play off his tears as simply having something in his eye.

Getting rejected by a toddler is a hard thing to bounce back from.

And the condescending tone of voice that he no doubt used when he said this must have been truly insulting. This kid can say kiss his free movies and snacks goodbye!

What a cruel yet perceptive child.

A weird life is better than a boring one, so you keep doing your thing, girl. Plus, this comment probably allowed @heysamkelly to do some self-reflection in order to accept her own idiosyncrasies.

This kid has a future in creative writing.

Or as the lead singer in an emo band. Either way, he's going places. Like straight to his room.

Isn't this exactly what you'd want to hear after a long and grueling flight?

That person you wished to be run over by a car just paid for your international flight, Dylan. You're going to miss that privilege once you're out in the REAL world.

On the bright side, this mom would finally get a day off.

How is it possible for children to be so adorable and yet so cold-blooded at the same time? Luckily for them, it makes it hard for us to stay mad at them.

The eye contact is what really makes this one cut deep.

That kid knows exactly what she's doing. Sure, she could say "Mama," but will she? No. She will not.

Maybe you should get a better job, kid. What do you even do all day long?

This kid should certainly be on the "naughty" list. Here's hoping his stocking was full of coal that year.

Considering many moms have perpetual "morning hair" from their insanely their busy lives, this one is actually pretty impressive.

@chrissyteigen A man complimented my hair. My son without missing a beat "sure it looks good now but you should see… https://t.co/EIZ5u3utDW
— Iniko Blue (@Iniko Blue)1506224850.0

At least her hair looks good some of the time. She should count her blessings.

This is a new one.

How does one look like a rock, anyway? And what type of rock are we talking about? Sedimentary, metamorphic, or igneous?

This little girl is on her way to being featured on a future episode of "Bridezillas."

At least this comment makes it seem like she thinks her mom currently looks good. It's important to hold on to the positives whenever possible as a parent.

Well, there goes your stand-up career.

We're sure this mom is, in fact, very funny, but her kid just has no sense of humor. Toddlers are like your one mean friend who always tells you the cold, hard truth whenever they've had too much to drink. Except it takes them years to sober up.