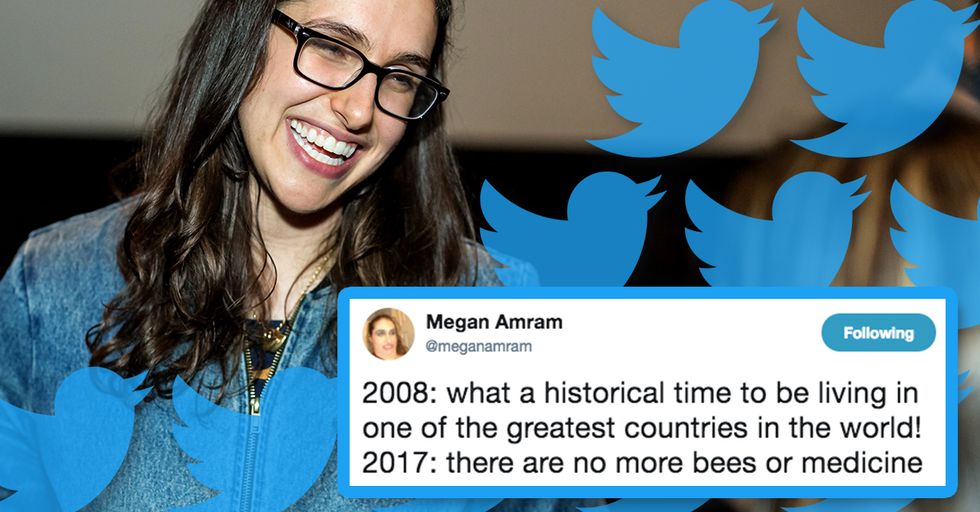 2017 was a pretty crappy year. But if anything positive came out of it, it's the reaffirmation that women are strong as hell and not going to take crap from the world anymore.

From Wonder Woman to #MeToo, 2017 has been about women rising up to their rightful positions as Queens of the Universe, Goddesses of Good, and general badasses.

In addition, women are frickin' funny, as demonstrated by this list of hilarious tweets by women this year. Even in the face of so much terribleness, these women were able to find the funny, and that's no easy feat.

Cheers to things not being so horrible but women being just as funny in 2018.

How is it that that little dog's ears look like they're luxuriously blowing in the wind? It's perfect, especially with Journey's greatest hit playing in the background.

None of This Matters

Aparna Nncherla is truly one of the best reasons to be on Twitter. She's simply an incredible joke writer. But also she knows that everything's terrible and nothing matters, and that's what we really need in a Twitter friend.

It's a good thing nothing matters anymore because there are "no more bees or medicine." It's amazing how in just a few short years, the country can go from a place full of hope and bees to a place full of misery and no bees. Here's hoping things turn around again in 2018.

We all forget to text when our moms or our friends tell us to message them to let them know we've returned home safe. It just happens. And that's all right as long as you're OK with frantic 3 a.m. calls making sure you're not in a ditch somewhere.

We can never resist a good pun, and Alexandra Petri delivered. This one has to do with books, authors, and ghosts, so it's basically a quadruple threat of awesome.

Honestly, this is us on all days. Fragile, frazzled, and not really eager to play with you. And definitely witchy. Oh wait, strike that. Replace the "w" with a "b" and that describes us. Of course, we're bitchy in the best way possible.

Shoutout to this hero of the Internet who A — has a chameleon for a pet, and B — uses that chameleon to entertain herself and others. She brought a little bit of light into the darkness that was this year.

We couldn't sing the ABCs out of order if we tried, so props to this imaginative little baby who's having a field day. We love a good remix, and TBH the alphabet song was long overdue for a shakeup.

They may be called dad jokes, but moms can make them just as easily, and we love a good parent tag-team joke effort. Also, full transparency — we chuckled out loud at this tweet...for way too long.

We don't know what's wrong with Carol, but she's got to check herself. Psst. We like to pretend that the Carol this Twitter user is referring to is actually Cate Blanchett's role in Todd Haynes' 2015 lesbian romance period drama. Makes it all the more funny that way. And then there was the girl who painted her whole face pink...

Leah may not have meant to post one of the funniest tweets of the year, but it doesn't change the fact that this is hilarious. Guess that "washes easily off skin" label wasn't quite accurate.

Megan Amram is a TV writer and Twitterer extraordinaire, and this pun — sent on the day James Comey was fired from the FBI — is hilarious, devastating, and way too clever for its own good. This is one of those tweets that you read and then drop whatever you're holding to applaud.

Ted Cruz Is the Zodiac Killer

Ted Cruz is so terrible that to make himself more likable he has to pretend he's a serial killer
— Jess Dweck (@Jess Dweck)1508366287.0

Remember when there was that hysterical rumor that Ted Cruz was the Zodiac killer? And then there was the time when Ted Cruz played along with the joke in an effort to seem fun and normal? Ha ha ha. We laugh because if we're not laughing, we're crying.

2017 was the year of The Handmaid's Tale, both the television adaptation of the classic Margaret Atwood novel and the story of every woman in America. We thought things couldn't get any worse, but then they did! And they continue to do so! We're on a full-blown train to fascism! But let's take the drama down a notch...

The Best Venn Diagram Ever

If you're not a fan of "Werewolf Bar Mitzvah," Tracy Jordan's song from 30 Rock, first, rectify that immediately, and second, behold the most amazing Venn Diagram in existence. But seriously! Look at every section. It all makes perfect sense.

Come at Me, Brocean!

There were a lot of things to be angry about in 2017, but this woman got irrationally angry at the ocean, and it's one of the funniest tweets of the year. It's true if you think about it — why does the ocean insist on talking to us only through conch shells? It's BS!

This is beyond perfect. Kris Kardashian slays so hard in that outfit, and her fierce attitude perfectly describes the feeling of being so full of conviction that you choose to end an email with a period as opposed to an exclamation point (or several). It's truly the sign of a grown-ass woman.

If you're in your late 20s (or even early 30s), this tweet is too real. In many ways, we're adults, but there are some situations that still seem like a "real adult" — whatever that means — should handle them instead of you.

The final honor for a funny tweet by women in 2017 goes to the one and only Hillary Clinton. It's safe to say she's had a tough year. She lost the election and has still constantly been raked over the coals by the GOP. And when she was reminded of the Comey letter, which was part of the reason she lost the election, the graceful, funny woman responded in the most hilarious way possible.