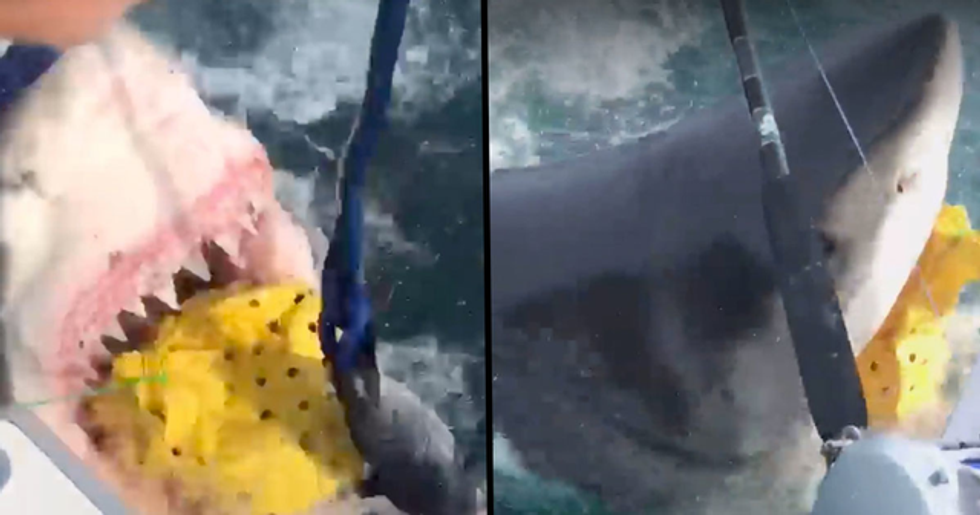 2,000 Pound Great White Shark Jumps out the Water to Rip Full Chum Bag Away from Fisherman

The ocean is a mysterious place. With eighty percent of our waters still left undiscovered, it can be an unnerving experience to swim out in the open sea. There are all sorts of creatures lurking beneath the water, and sharks are usually the first that spring to mind.

Ever since the release of blockbuster, Jaws, the world has developed a mutual fear of sharks, despite the fact that actual, real-life shark attacks are incredibly rare. Sharks are some of the least-studied fish in the ocean, and it's difficult to get a glimpse of the creatures from above the water.

So, naturally, the internet went into meltdown after shocking footage emerged of a Great White shark jumping out of the water against a fisherman's boat. The incident, which happened off the coast of New Jersey, was amazingly captured on film, and it instantly went viral.

It's needless to say - They're going to need a bigger boat.

Though they may look formidable, the great white shark is actually one of the more peaceful creatures in the ocean.

They have a visually scary demure.

Admittedly, Great Whites aren't the cuddliest of creatures. With rows of razor-sharp teeth and empty, black eyes, they can be a bit intimidating, to say the least. Oh, and the fact that they can grow to be the same size as a bus doesn't help either.

But shark attacks are less common than you'd think.

It turns out that humans aren't a shark's first dish of choice, with them preferring to hunt sea lions, seals, smaller whales, and turtles.

Statistics show that there were only thirty-two confirmed cases of shark attacks in the United States last year and only one fatality.

Considering that sharks evolved millions of years before humans ever walked the Earth (or swam in the oceans...), we are not a part of their typical diet.

Though they can still pack in a big bite.

That's undeniable. People have suffered major injuries when they get caught in the crosswinds of a Great White, though sharks have only been known to attack humans when they are confused or curious. Cute.

Following the release of the Hollywood blockbuster, a shark-hunting frenzy began, with people mercilessly killing the unfortunate creatures after watching their dramatized version on the big screen.

But people are gradually warming to the creatures.

As we learn more about our finned companions, we are seeing a softer side to these sharks, with people even safely swimming outside of the cage with Great Whites.

Though not all of us will brave the deep blue sea.

It's a no from us. It's obviously a huge deal when, in an extremely rare occasion, a Great White is actually spotted above the water. And even more so when it's captured on camera.

Captain Jeff Crilly captured incredible footage of his encounter with a Great White off the coast of New Jersey.

Capt. Crilly and 5 other fishermen were on their way back to shore in their boat after a Maco fishing competition.

The incident happened around thirty miles outside of Manasquan Inlet.

Though Great White shark populations are on the rise on the East Coast, it is still incredibly rare to see one of the creatures above the surface, which makes Capt. Crilly's footage even more astonishing.

They were pretty much asking for it, weren't they? The fishermen had strung out different types of attractors, including the body of a small tuna and a bag of grounded up fish bait, commonly known as chum.

The shark appeared out of nowhere.

Obviously attracted by the scent of the bait, the Great White emerged dramatically from the water as it threw itself against the boat.

The shark targeted the chum.

Luckily, the shark didn't get hooked, and, instead, stole the fish bait before hastily swimming off.

"We've fished for sharks a lot and we have never seen anything like that. We were amazed by how big it was," said Capt. Crilly in an interview.

He estimated that the shark was half the length of the boat.

His boat, which is quite hilariously named Big Nutz Required II, is a thirty-one-foot Bertram sport boat. If the shark was half the size of the boat, it would have been between sixteen and eighteen feet in length. Yikes.

And as for the weight...

"It was harder to guess the weight because we had nothing to compare it to, but it was probably about 2,000 pounds," Crilly said. To put that in perspective, that's around the same weight as a small car.

You can watch the astonishing footage here.

How the fishermen are cheering rather than screaming, we do not know.

The sheer size of the shark was shocking.

It is comparable to social media sensation, Mary Lee the Shark, a tagged great white shark that weighed in at 3,500 pounds.

It's refreshing to see these majestic creatures in their natural habitat.

A worryingly high number of fish species are now only seen in tanks, as the human impact on oceans and coral reefs across the world is steadily wiping out fish across the world.

Great Whites are somewhat at risk.

Though they're not endangered yet, Great White numbers have sadly been dwindling in the last few years, mainly due to hunting. Though putting one of these beasts in a tank may be an impossible task...
20%