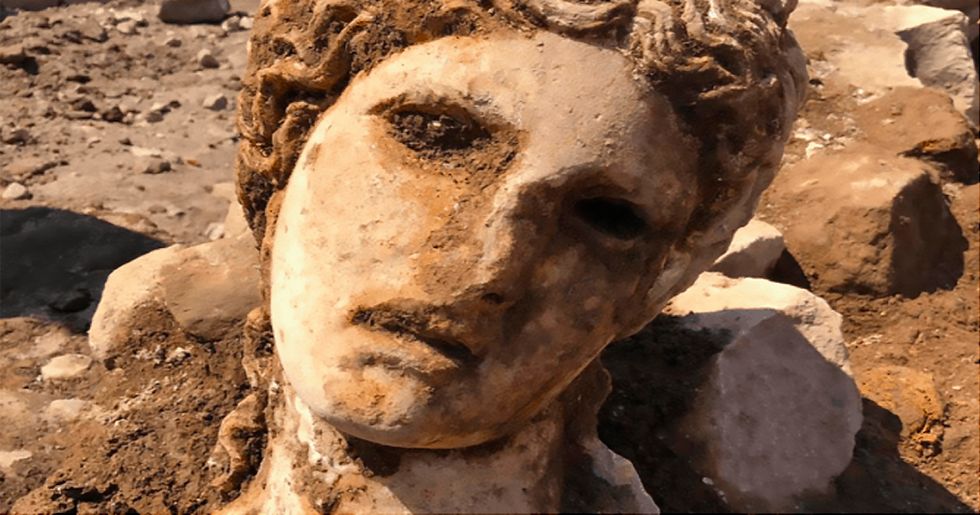 There's nothing better than a story about a building site that accidentally uncovers something ancient and interesting. There's something so fascinating about uncovering something nobody else has seen for hundreds or even thousands of years. Probably because it makes us feel a little bit like Indiana Jones (minus the hat).

Humans have been around for a really, really long time. (At least 200,000 years! That's a lot of #content). So we've had a lot of time to bury stuff, whether on purpose because we thought it was boring, or by accident, because maybe a volcano destroyed our entire village.

Either way, we are constantly uncovering bits of history as we change the world around us.

In 2012, the body of King Richard III of England was found buried underneath a parking lot.

In 2013 in Madrid, an entire Medieval hospital, once used to treat the Bubonic Plague, was found where they were about to build an Apple Store.

And this month, excavators in Rome found the head of a 2,000-year-old Roman statue.

You probably know this but Rome is very old.

One of the oldest continuously occupied cities in Europe, Rome was likely founded around 753BCE. That means a lot has been going on there for the last 2800 years.

The Roman Forum is a plaza surrounded by ancient ruins that once was the center of the city of Rome.

The Forum was built over time, but historical evidence shows that building began in 700BCE.

Archeologists were digging near the Roman Forum when they made an amazing discovery.

Just when you think we've found all the good stuff the Romans left behind, something new pops up and you remember we've been around for thousands of years and there are probably millions of historical treasures humans have yet to uncover buried in the ground.

The archeologists uncovered a giant piece of a statue.

A giant head, to be exact.

The archeologists found the head in the wall of a Medieval building.

The statue head was being used as a building material in the wall.

It sounds pretty crazy to us that people would just use a Roman statue head as a piece of foundation, but reusing old materials was common in medieval times.

Don't have a rock? Why not use that ancient Roman statue that you have lying around?

The head is thought to be from a statue of the god Dionysus.

Dionysus was basically the most fun god.

He wasn't a regular god, he was a Party God.

He was the god of wine, wine-making, fertility, ritual madness (not sure what that is but it sounds fun), and theater. Basically all of the fun stuff.

Dionysus was the son of Zeus and a mortal woman.

When Zeus' wife Hera found out Zeus had gotten a mortal woman pregnant, she killed Dionysus' mother and they brought him to live on Mount Olympus.

There he had the power to make grape vines grow and also to make mortals go insane.

And a magic wine glass that was always full.

Unsurprisingly, Dionysus was a popular god with lots of followers.

Dionysus is a Greek god, so the Romans would have called him Bacchus.

Worshippers of Bacchus were said to have Bacchanalia, or mysterious ancient festivals of drinking, feasting, and sexual promiscuity.

The followers were a secret cult that worshipped Bacchus.

And their wild, drunken celebrations would go on for three days.

Archeologists think the head is Dionysus because of the statue's long curly hair and soft feminine features.

Also, it had a little tattoo etched on it that said "wino for life". (JK).

In Greek and Roman mythology, most of the male gods were depicted as strong and burly.

But Dionysus was always shown with soft, feminine features.

Who has time to hit the gym when there's endless wine to drink?

Dionysus/Bacchus was the most relatable god.

The statue head has no eyes (creepy), but it was because they think there would have been jewels embedded in the eye sockets.

Which is also...kind of creepy?

The head is likely from around the 1st century BCE.

Archeologists are working to restore the head.

And they believe there may be some of its original paint still on the statue.

Did you know that Greek and Roman statues weren't white at the time?

Even though we think of them as unpainted marble, historians now think that Greek and Roman statues were actually painted vibrant colors.

Once the statue is restored, it will be put on display.

It has to be cleaned of 2,000 years of dirt, which could take a while.

It's definitely a neat archeological find.

And cool to think we are still finding things from thousands of years ago. It makes you wonder what else we have yet to discover.

Some people, however, think there might be a greater power at work here.

No, not the power of the gods. The power of (who else?) Korean boy band BTS.

And guess what it's titled? Dionysus.

Fans on Twitter are joking that BTS summoned the head.

It is a strange coincidence.

But are BTS that powerful?

Either way it's an excuse to listen to the song.

According to their fans: yes.

How can you explain this otherwise?

In any case, the Dionysus head is a very significant find.

To celebrate: how about cracking a bottle of wine? Dionysus would approve.