20,000 Chinese Tourists Stuck at Packed Attraction After It Reopens | 22 Words 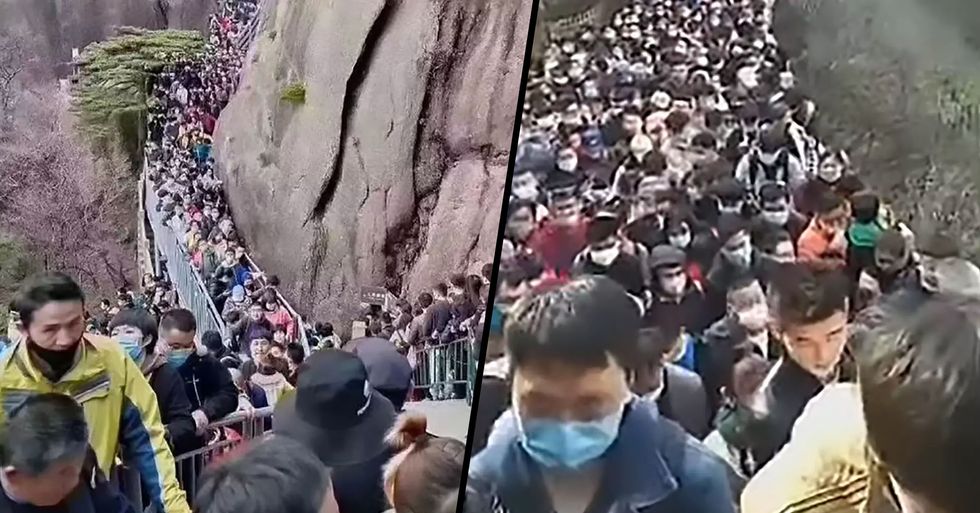 20,000 Chinese Tourists Stuck at Packed Attraction After It Reopens

We've all been told to self-isolate, to halt the spread of the virus, but sadly not everyone is taking their vital role seriously in reducing the number of people infected.

People in China seem to have completely forgotten that we're still in the midst of a global pandemic, by doing the most inconsiderate thing. The video is absolutely shocking...

Self-isolation is something we're all coming to terms with.

Countries all over the world have gone into full lockdown, to prevent any further spread of the disease.

It's been spreading faster than anyone could imagine.

The disease can't spread if people are in isolation, effectively causing it to die out.

While medical researchers work tirelessly to find a vaccine, people who can stay isolated, and limit their time outside have been urged to do so.

It's been spreading notoriously easily...

Many are finding self-isolation rather boring...

We're all struggling with being cooped up in the house for so long...

Another beer? Why not! Sadly, people in China have completely forgotten we're still dealing with a pandemic.

less than a month after Huangshan National Park in China's eastern province of Anhui closed its doors, they've reopened, inviting visitors once again.

They only decreased the number of people allowed in.

They were offering free entry! Because that sounds like a good idea.

It was done in a bid to boost the tourism industry, which has been hit hard during the pandemic. The 190 RMB, twenty-seven dollar, entrance fee usually charged for the Huangshan scenic area was waived for the residents.

This resulted in visitors cramming into the park to get a place, over the weekend.

Tens of thousands of people queued shoulder-to-shoulder to get in, with many choosing not to adhere to social distancing guidelines or to even cover their faces.

Both gates eventually had to close after the 20,000 capacity was reached.

It brought in 5,300 tourists to its ticket gates every hour using 120 shuttle buses before it started encouraging people to visit other sites nearby after it had almost reached full capacity at 9.22 am that day. Just an hour later, the ticket gates then closed as the full 20,000 capacity was reached.

Huangshan National Park issued an apology to those who couldn't enter.

They said the flow of visitors had been slowed down due to health screening requirements, as each visitor had to present their health status and undergo temperature tests. Those with symptoms were immediately turned away.

The park has been criticized for offering free entry in a time like this.

Spreading the disease is still a concern and the enticing free entrance was bound to cause more people to flock to the area, endangering the lives of all the people there, all to attract visitors.

The province, which borders the virus epicenter Hubei, has reported 990 cases and six deaths.

Overflowing with tourists, the Huangshan scenic area in Anhui, #China halts ticket sales on Apr. 5 as it reaches th… https://t.co/noLBMhj5L3
— The Paper 澎湃新闻 (@The Paper 澎湃新闻)1586072700.0

Huangshan National Park made a statement yesterday, saying it would continue to enforce mask-wearing and social distancing where possible by increasing its number of volunteers. Because adding more people is bound to fix the problem. Keep scrolling to find out what one celebrity has done to help with our quarantine boredom...