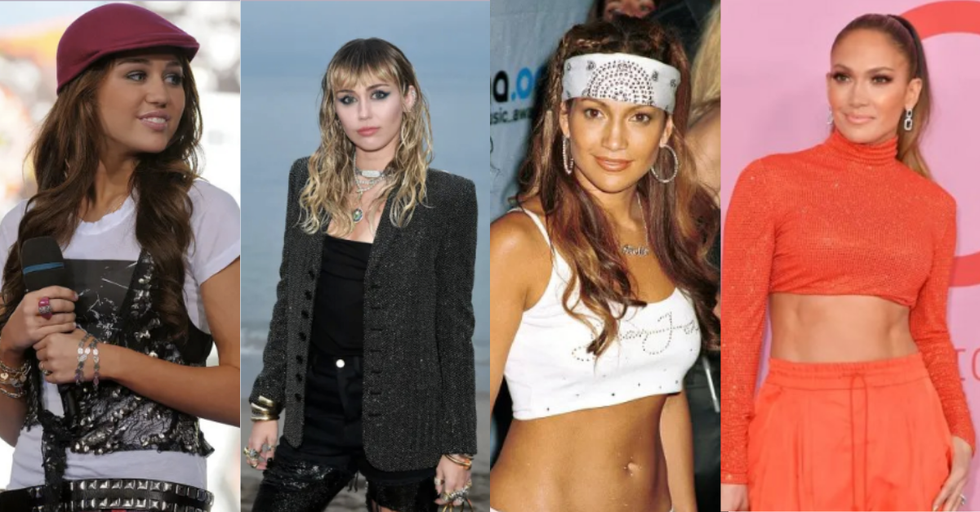 That's right, with everyone bleaching blonde streaks into their hair and wearing platform sandals, it's hard not to call the 2000s the sexiest decade. (Plus, the 2000s were the first decade the internet became widely available, so everyone with a modem spent most of their time looking at pictures of Britney Spears with a shaved head.)

So what happens when the beauty starts to fade and the wrinkles start to appear? Let's find out. Here are some of the hottest 2000s celebrities, side-by-side with pictures of them today.

Paris Hilton looks to have shed her raging party-time look and today feels more buttoned-up and debonair. Now she's less girl you'd want to dance up on at the club and more cool younger aunt who has a masters in Economics but is still down to talk with her 11th grade niece about relationship drama.

When Nicole Richie and Paris Hilton would show up at farms for their reality show The Simple Life, Nicole always seemed like she could fit in. And I think that's borne out since today she looks like an earthy lawyer who hikes on the weekends.

Aww, Miley Cyrus used to look like a little baby! And today she looks like... well, still a baby. Even when she was aging herself up by shaving her head and coming in like a wrecking ball, Miley Cyrus still looked too young to buy lottery tickets.

Does Jessica Simpson even age? These two pictures look to me like they're of the exact same person, except someone took the second picture into Photoshop and messed with the Hue and Saturation.

The one-time High School Musical star looked so jazzed to be on a red caret back in the early 200s. And today? No one has ever been more over it.

Gwen Stefani's gone through a major change between the early 2000s. The only difference, I think is wearing jean jackets. You don't got nothing to prove when you wear a jean jacket.

In the early 2000s, Christina Aguilera was mid-transformation into Xtina, her edgy alter ego. Today, she's just a stern-looking principal — the kind who would have absolutely held the dirrty version of herself back a grade.

This may come as a surprise, but there was a time when Beyonce wasn't the queen of all media. She was just a fun, confident pop star doing her best on VH1 red carpets.

Having aged out of her rebellious teenager phase, Kim Kardashian today looks like she was drawn by '90s comic artist Rob Liefield — that is, if she was a drawing, we'd all be complaining because surely no real woman could have proportions like that.

Even though she burst onto the pop scene as a sexed-up school girl, Britney Spears' true form has always been semi-trashy country mom. And now she's doing it elegantly.

A lot of these early 2000s celebrities, Rihanna included, look today a lot like they did back then, only with more confidence. Can you imagine wearing a fancy fisherman's hat on a red carpet? I can't imagine early 2000s Rihanna could have.

A lot of these glow-ups come down to the clothes these celebrities chose to wear on the day their pictures were taken, but the difference between Anne Hathaway then and now is monumental. Today's Anne Hathaway is far too glamorous to be caught dead in jeans. She sleeps in pajamas designed by Vera Wang.

It's been said that pulling your hair back is a sign of confidence — that you have nothing to hide. But as one of the Great Beauties of our time, Jennifer Lopez has never had anything to hide, which makes the bandana a strange choice.

Having not kept up with Lindsay Lohan, I don't know if she's out of the woods yet, vis a vis all the issues she was (very justifiably!) going through as she transitioned out of child stardom. In any event, here are some photos before and after Lindsay Lohan's life got rough.

Cameron Diaz has done what I call the Reverse Anne Hathaway — back in the early 2000s, she would've never worn jeans. Now she's more or less an elder statesman of Hollywood and can therefore do whatever the hell she wants. We're lucky she even gives enough of a crap to put on pants.

When Kelly Clarkson won American Idol, she looked like she was about 11 years old. Today, she looks like a mom who goes to GameStop and demands to talk to the manager after finding an M-rated game in her son's room.

Who could forget the time Ashlee Simpson's track went up in flames live on SNL, leaving her to do a jig as the show went to commercial? Clearly, the experience hardened Ashlee, turning her into the stone cold assassin she appears to be today.

Mischa Barton still looks good today, and she certainly looks much better than her character from The O.C., Marissa Cooper, who in the early 2000s looked like the photo on the left and today looks like a skeleton.

The only difference between past Scarlett Johansson and current-day Scarlett Johansson is the bags under her eyes, and those are presumably only there from having to keep the secret of what happens to Black Widow in Avengers: Endgame a secret for so long.

No one was cooler than Hilary Duff's Lizzie McGuire in the early 2000s (I know she was played up as a loser but look at that scarf! She was so cool!)

As the titular Malcolm of Malcolm in the Middle, Frankie Muniz played a boy genius. Today, he looks like a regular man genius, because his head is very large and that makes me think he has a big brain.

Back in the early 2000s, it almost felt like Fergie was out to set the Guinness World Record for Most Midriff Shown on TV. Today, she's so done with showing her midriff she wears jumpsuits at all times.

Ah, but Pink was always ready to challenge Fergie for the Most Midriff Bared Award. Today, she wears leather jackets, so she can quickly zip up and cover her midriff if it gets too cold.

The artist behind the "Thong Song" still performs today, and his hair is as yellow as ever. Is that-- is that his natural hair color?

Another star of The O.C., Ben McKenzie today looks like a cleaned-up version of himself as a kid. He too looks much better than his character from The O.C., Ryan Atwood, who in the early 2000s looked like the photo on the left and today looks like a skeleton. (In interviews, The O.C. creator Josh Schwartz said Ryan died after the events of the show, having been strangled by Marissa's ghost.)

Look at that fresh-faced Katie Holmes, ready to conquer the world and win Dawson's heart. And look at her today, having conquered Scientology and won the heart of Batman in one Batman movie.

In the years between the early 2000s and today, Ryan Gosling has gone from the kind of boy you wouldn't want your daughter to date to the kind of man you'd be proud to have as your son-in-law (if he'd just shave that scraggly beard already).

In the time between these two pictures, the former Gossip Girl has learned how to curl her hair. And that's all she's learned. Blake Lively is famously anti-college.

The former That '70s Show star used to look like the kind of guy you'd want to punch in the face. But today? Today, Wilmer Valderrama looks like the kind of man who would let you punch him in the face if it would make you feel better because really, he's only concerned with you and your needs.

Ooh, those curls looked so good on the N*Sync front man's little baby head. But today, Justin Timberlake is a grown-up man, and grown-up men must comb their hair and wear strange suits where the pants don't match the jacket and there's no tie even though the shirt is buttoned like there is one.

The American Pie movies were like a factory for early 2000s stars, and Tara Reid sure seemed like she would be the biggest of them all. But surprisingly, the biggest star of those movies turned out to be... the dad who's on Schitt's Creek?

Obviously Rachael Leigh Cook is looking even better today than she did in the 200s, but what is unclear is whether or not she looks this good because a boy made a bet that he could make her prom queen.

Look at that fresh-faced producer in the colorful polo. Who would have thought he'd grow up to be the musical genius capable of penning lines as beautiful as "too many Urkels on your team that's why your wins low"?

Avril Lavigne today is every bit as punk as she was back in 2003. Which is to say, not punk at all. My dad is more punk than Avril Lavigne, and he votes Republican.

Look at the baby-faced Maroon 5 frontman. Do you think that young Adam Levine could have ever guessed he'd be where he is today — a judge on TV's The Voice? The answer is no because The Voice did not exist then. Love these side by sides? Then stay tuned for unrelated celebrities who just happen to look exactly alike...