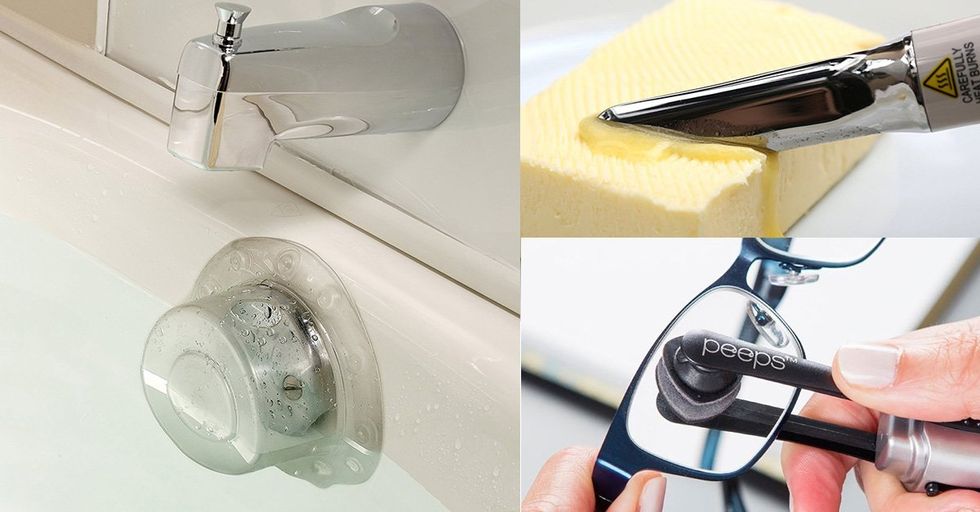 Why Didn't I Think Of That? 21 Brilliantly Simple Inventions

Twenty-one products so brilliantly simple, you'll slap your forehead and say, "I should've thought of that!"

We hope you find these products as brilliantly clever as we do. Just an FYI: 22Words may receive a share of sales from links on this page.

I think I just found my newest hobby.
Buy Now

Use these handy silicone liners to create a nonstick layer on your baking sheets. They're great for cookies, candies, cakes, biscuits — anything you want to bake in the oven. And they're dishwasher-safe!
Buy Now

This Genius Set Of Buckle-less Belts

But where will I put my giant western belt buckles? In the back of my underwear drawer. Where they belong.
Buy Now

This Tiny Gadget Not Only Charges Your Devices, But Also Adds Bluetooth Functionality To Your Car

Feel like taking that 20th century car into the 21st? Bluetooth amazingness is a ROAV adapter away.
Buy Now

"According to 3000 reviewers, it hurts at first, but after a day or two, it starts to work its magic.
Buy Now

How did this just get invented?
Buy Now

"Thousands of reviewers tout the powers of these bags of activated charcoal, specifically highlighting their abilities to freshen truly nasty old shoes, or even drink up the odorrific remnants of spoiled milk inside a minivan.
Buy Now

The sad truth is that plastic straws are terrible for the environment. But if you love drinking out of straws (like we do), all hope is not lost! These stainless steel straws are perfect replacements. And they come with their very own cleaner brush!
Buy Now

Throw out those dryer sheets and fabric softener. These solid wool balls are a wildly popular solution for soft and static-free clothes.
Buy Now

I love corn on the cob, but I hate flossing afterwards. I think I've found my new holy grail.
Buy Now

This ECHOGEAR Outlet Shelf That You'll Want In Every Room

Why don't all outlets have shelves?
Buy Now

If you haven't tried a REAL pair of nail clippers, trust me, you need to. It's a completely different (and far superior) experience from those $2 clippers.
Buy Now

The Dipr Is The Greatest Oreo Accessory Of All Time

True, it may also be the only Oreo accessory. But that doesn't make it any less awesome.
Buy Now

This Bed Band That Prevent The Dreaded Sheet Slip

Who can get any sleep when your sheets are constantly slipping off? These brilliant bed bands eliminate that problem so you can finally catch some Z's.
Buy Now

There is literally decades of dust living in the crevices of my windows right now, awaiting attack by the Trycooling Brush.
Buy Now

The Magnogrip Keeps Screws And Nails Right Where You Need Them

With around 10,000 positive reviews, the MagGrip is hands-down the most-loved (and best-selling) phone holder on Amazon. Just add a thin magnet to the back of your phone, and it'll stick like glue to the MagGrip mount. Seriously, people are obsessed with this thing.
Buy Now

A Simple Device That Adds A Foot Rest To Your Shower

As an advocate of rest, and particularly the resting of feet, I am 100% in favor of this.
Buy Now

"It kills germs, mold, freshens air and wipes out odors, all while staying nice and small on your wall.
Buy Now

The Guac-Lock Will Keep Your Delicious Green Dip Fresh

This Simple Cup Will Make Baths So Much Deeper And Therefore, Better

How has no one thought of this before???
Buy Now

This Tweezer-Like Gadget Will Keep You Seeing Clear

I can see clearly now, the smudge is gone...
Buy Now

Stop Resenting Your Pets: Clean Up Their Hair From Anywhere For Under $20

The all-rubber construction of the FURremover Broom not only lends to its long-term durability, but also its multi-use utility as a fur-gathering sweeper, and a pee-pushing squeegee. It'll keep your carpets fur-free and your hardwood unstained, so you can love your pets in all their messy glory without (too much) resentment.
Buy Now

This Timed Pet Feeder Will Keep Your Furry Friends Well-Fed

This thing is amazing. And it's less than $20.
Buy Now

This $1 Ring Will Open Any Bottle

Spend one dollar and give yourself at least one reason to exist at your next party.
Buy Now

Now you can crack nuts and open a beer while cutting chicken and stripping wire.
Buy Now

This Auto-Shutoff Outlet Will Save You Major Anxiety

No more circling back home to "just make sure" you turned off that hair straightener.
Buy Now

So many frayed cables. So little time.
Buy Now

Seriously, is there anything less relaxing than propping up your iPad when you're trying to kick back in bed?
Buy Now

The Tapi Turns Your Faucet Into A Drinking Fountain

A few bucks to add a drinking fountain to your own sink? Worth it.
Buy Now

The TubShroom Will Catch All The Hair

The Tweexy Makes Nail Polish Spills A Thing Of The Past