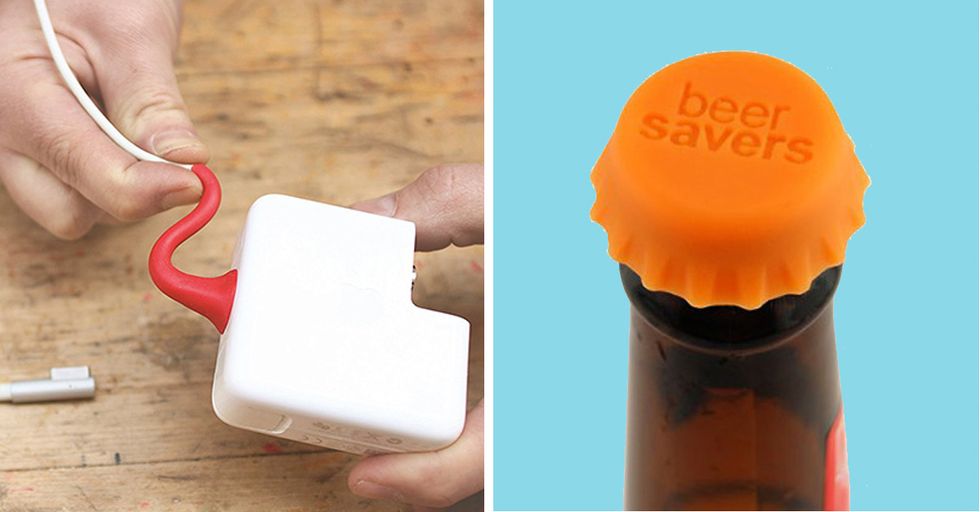 Because there's many of us who'd prefer a set of moldable glue over another box of chocolates, we've amassed a list of 21 ingenious inventions that make for perfectly original (and inexpensive) Valentine's Day presents this year.

We hope you find these products as fascinating as we do. We've picked them out to share because we love them, not because we're being paid to. However, 22Words does participate in the Amazon affiliate program, and can receive a share of sales from links on this page.

This $17 Battery Pack Will Seriously Save You From Disaster

You know that terrible, tightrope-walking feeling you get when your phone's just about out of batteries? Of course you do. People who own these Anker battery packs don't.

One $7 Pack Of These Beer Savers Will Save Your Beer, Money

Get a set of these Beer Savers and keep that one terrible friend (you know who he is) from wasting good beer every time he comes over.

Yes, they cost a little more than the cheapies, but you wont' be replacing Anker's woven lightning and micro USB cables every few months either. These babies are built to last. "Grab "Grab

Yep, $20 Will Buy You An Actually Great Set Of Bluetooth Headphones

Even better options start around $25, but for less than the price of a three-topping pizza, these bluetooth headphones will keep you rocking wire-free for years.

You Can Take This TinyBluetooth Speaker Anywhere

Anker's $20 wireless speaker packs a sound and presence that belies its minuscule size.

All those sleepless nights you've stayed up, fretting over salmonella exposure? Prepare to sleep soundly again, friends: the C-Pump is here, and it's only $14.25. Yippee

These Fantastic Rechargeable Batteries Will Literally Last For Years

News flash: rechargeable batteries aren't terrible anymore. Panasonic's Eneloops can be recharged up to 2100 times, meaning you'll save big bucks on batteries, and can finally race that RC car around all you want. Yippee

To put things in perspective: the first multi-gigabyte hard drive was the IBM 3380, which stored 2.5 gigabytes of data in a refrigerator-sized frame that weighed over 550 lbs. Oh, and it cost almost $150,000. That was in 1980. Thirty-seven years later, and you can get 25x the memory at 0.01% of the weight and cost. Not to mention that the Samsung BAR flash drive looks like a cool sci-fi movie prop, with its sculpted metal body and handy built-in loop and enough memory to store around a quarter million books.

Yes, they are still broadcasting network TV (in high definition, no less) over the airwaves. And yes, it's still free. As a long-time cable-cutter, I use this particular antenna to supplement the streaming offerings of my beloved Roku 3 (AKA the greatest streaming device on earth known to mankind ever). It's simple, effective, and paper-thin. Yippee

This $8 Invention Adds An Invaluable Footrest To Your Shower

Much like cupholders, I don't understand why more everyday things don't have built-in footrests.

Stop Resenting Your Pets: Clean Up Their Hair From Anywhere For Under $13

The all-rubber construction of the FURremover Broom not only lends to its long-term durability, but also its multi-use utility as a fur-gathering sweeper, and a pee-pushing squeegee. It'll keep your carpets fur-free and your hardwood unstained, so you can love your pets in all their messy glory without (too much) resentment.

Right now, as you read this, seconds of your life are ticking by, marching off into eternal, irredeemable nothingness. But that doesn't have to be a depressing thing! Take control of time with the Magic Cube Timer. Just place whatever time you'd liked timed facing up, and the cube counts down tiny intervals of your life, which you're hopefully using in a productive and creative way.

Want to feel like a super hero? Invulnerable to heat? Through a combination of Kevlar and Nomex fibers that I don't quite understand, the Ove Glove manages to keep your delicate human hands burn-free, no matter how hot the surface. You can throw out those stupid oven mitts.

This $12 Case Will Keep Your $900 Smartphone In Perfect Shape

That's the product shot on the left, and my own phone on the right. I've literally destroyed every other phone case before the Silk. Ten months in, and it still looks new, with its textured rubbery (but not tacky) body showing effectively zero wear. Don't take the word of an anonymous writer for it? The guys over at The Wirecutter agree.

Sugru will fix basically anything that's broken: from that pesky bracket in the bathroom to your overpriced computer charger, to your childhood dreams (no guarantees on that last one). But seriously, Sugru's a pretty magical product that's not only handy as heck, but makes fixing stuff fun.

Some products make immediate sense. This is one of them.

Don't Have An In-House Drinking Fountain? With The Tapi, Now You Do

Award for cleverest gadget of the bunch goes to the Tapi, hands-down. Not only does it add some much-needed flair to your notoriously boring faucet, it makes a refreshing sip of water just a pinch away. Oh, and it's dirt cheap, and comes in 11 colors to suit your mood of the day.

This $14 Smart Thermometer Is A Hypochondriac's Dream Device

Annoy your children and allay your anxieties with the Kinsa Smart Stick Thermometer. The Kinsa plugs right into your iPhone or Android device, while its other end plugs into your mouth, armpit, or butt (yup!). The dedicated app not only displays temperature, but tracks your entire family's health patterns over time, and can provide recommendations for care which may or may not be better than just seeing an actual professional doctor. Either way, it's a smart thermometer for less than $15 with fantastic ratings on Amazon.

I do everything that I can to minimize the dishwashing I must do after gorging myself on dinner at home. There's a host of pot-friendly strainers that'll eliminate the need for a colander (and who doesn't hate washing a colander?), but this is by far the most endearing. It looks like a whale!

With each new generation of its admittedly beautiful products, Apple finds it necessary to eliminate beloved ports in the interest of so-called "design". Well, if you're like me, and own about 35 different USB-based devices, this is a problem. Fortunately, there's a host of affordable solutions which, while not optimal, will add much-needed USB, SD and MicroSD ports to your computer. And this fella's the best-looking of the bunch.