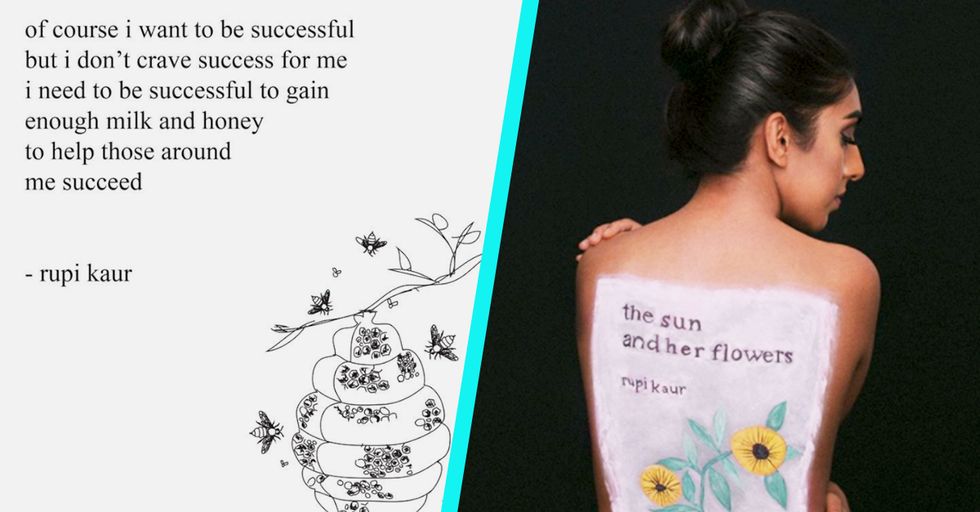 If you haven't heard of Rupi Kaur, you might not really be living your best life. The 25 year-old poet, performer and author has been touring the world reading excerpts from her second book, "the sun and her flowers". Her first collection of poems, "milk and honey" was released in 2014. Both of her books have been number one on the New York Times Bestsellers list. But people are not praising Rupi for her wild success, but instead for her incredible authenticity and vulnerability on subjects such as abuse, femininity, love, loss, identity and beauty.

The young poet has been traveling the world, sharing her art and her poems. Here are some of her pieces of poetry found in both her published books, as well as some facts about Rupi herself and how her life has impacted her work.

The Face of Modern Poetry

What makes Rupi different from many other poets is her familiarity with her fans. Her book tours, where she has traveled around the world to do live readings of her poetry, have given fans an opportunity to see the face behind these vulnerable verses and meet the woman who has stolen the hearts of so many readers. Other modern poets that have found fame through Instagram, like Atticus , use a mask to hide his identity. Rupi proudly represents her culture, her womanhood and her past and greets her fans with welcoming arms. Originally born in Punjab, India, Rupi proudly represents her culture and history not only in her work but in her performances.
Some of Rupi's work is short in length but profound in thought. She uses a type of writing that contains no uppercase letters and the only punctuation she uses is a period. She explains on her website that she writes in Gurmukhi script to honor her culture and her mother language of Punjabi. "It is less about breaking the rules of english (although that’s pretty fun) but more about tying in my own history and heritage within my work," she writes on her website.
"Writing this book was extremely difficult for my spirit. I've never faced more self doubt than I have over these past two years," Rupi wrote in her Instagram caption. "So to sit here now and read all your words of support helps transform how I see myself and my work. Your kindness has brought in some radical self love. Thank you." Rupi grew up drawing, painting and writing as a child, strongly encouraged by her mother.

Many of Rupi's poems are focused on femininity, strength and representation. She writes often about her mother and how she has lifted her up and been an encouraging parent in this process.
A big source of inspiration for her poems and artwork is her mother. She often talks about her strength, her ability to provide for her family and how much she has taught Rupi about love and sacrifice. She has a poem titled "advice I would've given my mother on her wedding day" where she writes about how much she looks up to her and how she wants to take care of her now after all she did to take care of Rupi growing up.
Rupi, being originally from India, but moved to Toronto with her family as a child, embraces her history and her culture. Many of her poems are about growing up in a different country and learning more about her family background.
Rupi's work has touched hearts internationally which just goes to show that pain, love and heartbreak are universal emotions. Her books have been translated in over 30 languages.
Empowerment is another common theme throughout her poems. Both of her books are broken into chapters. "milk and honey" is split into four parts: the hurting, the loving, the breaking and the healing. "the sun and her flowers" is split into five: wilting, falling, rooting, rising and blooming. There's a theme of regrowth and relearning to love herself throughout her trials and pain.

Some of Rupi's poems may be graphic for readers as she explains the trauma that comes with her past and the pain she's experienced sexually, physically and emotionally due to being abused.
In this poem, titled "midweek sessions" she gives her readers a trigger warning, letting them know that this may be a sensitive subject for some of her readers. Rupi does not shy away from the subject of rape and sexual abuse, but she does show sensitivity and gentleness to those who have different experiences and may not be ready to reflect on them.
Rupi also does all of the illustrations in her work. She began drawing as a child and used it as an early form of communication. She now embraces her illustrations and photography a large part of her passion of expression.
Rupi's Instagram is filled with honesty, not just in her reposting of her poems but in the way she interacts with her fans and shares photos of her on tour. She often writes how it can be exhausting to be traveling so much but that her joy truly is in her expressional sharing of her poetry in front of her fans. She also posts videos of her meeting fans and lots of boomerangs of her with her team while they work. Plus she is becoming a style icon with her brightly colored dresses and gorgeous gowns.

Mental health is a topic that Rupi also frequently discusses. She is a proud supporter of the Sikh Family Helpline, which aims to provide a safe place for those who are struggling with mental illness and end the negative stigmas that come along with mental health.
The drawings in both of her books use simple lines and no colors, but add depth and understanding to each one of her works. It is rare to find a poet who also does illustrations and Rupi uses imperfect lines and ambiguous shapes to enhance her prose and allow for more creative interpretation for her readers.
Her bravery to share her vulnerable poetry is praised by many, but many of her poems reveal how she struggles with insecurity, doubt and self-hatred at times.
"Language is powerful. The words you use on yourself are powerful," Rupi's caption reads on Instagram. "When these words you use are laced with negativity, you rot from the inside out." Rupi uses her words to bring healing and light to the darkness that can come from self-inflicted pain.
Despite heartbreak, Rupi writes many poems about love, healing and hope.
Her poems reach others with similar struggles; she remembers the pain and channels it into her poetry. A lot of comments on this post were her fans saying they could connect to this poem and they feel this same pain.
"This is such an accurate way to describe in verbal terms how I feel with my father. What a great piece of work!" One person commented on this Instagram post. It's clear that Rupi's relationship with her father has affected her greatly and is a point of inspiration for her writing.
Despite the trauma and sadness, the beauty that lives within the pages of her book explain the mystery and intricacies of falling in and out of love.
This is one of my favorite poems of Rupi's. I could see myself getting this tattooed on my body, her words and her art. She has such a gift in communicating her thoughts in a way that connects people from all over the world.
Rupi is currently on a tour through India from January to March. Her performance readings include her reciting her poems in a theatrical way; most of the time it's simply her and a copy of her book on stage. She uses her voice, her hands and sometimes music to expand the expression of her poems, engaging her audience in the vivid retelling of her literatature.
This poem was written in 2014, right when "Milk and Honey" had been published. "I was deeply inspired by the way parts of nature worshipped one another. It reminded me of how humans fall maddeningly in love with one another," Rupi wrote on Instagram.
This is the last poem in "The Sun and Her Flowers". Rupi continues to be honest about her struggle with mental illness, specifically depression. In the closing remarks of her book, she writes that a reader once told her that Rupi's poems had saved her life, yet Rupi herself was struggling to save her own. This book, for Rupi, was a way to find her own roots and remembering to blossom and keep growing.
Rupi Kaur truly is breaking down barriers, creating new forms of expression, uniting people internationally through love and pain and ultimately using her platform to talk about issues that matter.