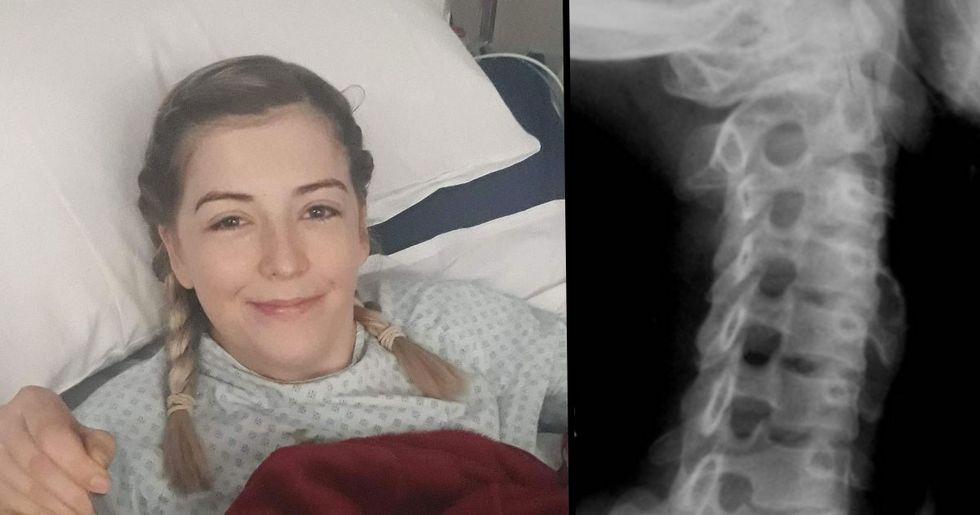 Paralysis is a terrifying concept. The idea of losing the ability to move, which we so often take for granted, is terrifying. The worst part? The fact that this kind of life-altering change could be caused by something seemingly insignificant.

For one twenty-three-year-old paramedic from London, UK, this fear became a terrifying reality. She was simply stretching when she cracked her neck, something that many of us do daily. But after she heard her neck pop, she realized that something had gone horribly wrong.

Not only had the movement caused the young woman to have a stroke, the repercussions also left her paralyzed on one side of her body. And the reason that she didn't immediately call for an ambulance?

Well, it's certainly relatable! Keep reading to find out more.

It's totally common to feel a bit stiff once in a while.

Especially in today's society, when we spend so much more time sat down than our bodies are designed for.

Nothing beats a good stretch.

Being able to move your body and relax any cramped or sore muscles can be a welcome release.

We don't often tend to go this extreme...

But even the tiniest stretching motion feels great, especially if you've got a stiff, sore back.

But once in a while, something goes awry.

A misjudged stretch can lead to a surprising amount of pain. But, as we recently learnt, there can be severe consequences.

This is a story that makes us feel pretty uncomfortable - it'll definitely affect our stretching decisions in the future!

Kunicki was a healthy twenty-three-year-old woman, living in West Hampstead, London in the UK.

She lived a fairly active lifestyle.

She never dreamed that she would ever be unable to take part in activities like this one day.

Kunicki also had an active and fairly stressful work life.

She trained as a paramedic in Australia, and was working full-time as one at the time of this accident.

Put simply, everything was chugging along nicely.

Kunicki was fit, healthy, and wasn't thinking too much about any big accident that could befall her.

She was settling in for a well deserved night off work.

After heading out with a friend, the two went home to watch some movies in bed together.

Kunicki was feeling cozy and tired-out.

As she snuggled into a comfortable viewing position, she decided to get a little stretch in for maximum comfort.

But as she stretched, she noticed something weird.

She noticed a pretty loud (and seriously disconcerting) cracking noise.

She tried to put it out of her mind.

But as she stood up to walk out of the room, she collapsed to the floor, and realized that she had lost control of one leg completely.

Kunicki had one immediate concern.

She'd just returned from a night out and was worried that someone may have slipped something into her drink.

She didn't immediately want to call the emergency services.

She was worried that she was being overdramatic - and she had another reason for avoiding calling an ambulance.

Kunicki was concerned that the paramedics would think she was drunk.

Even though Kunicki was pretty sure that something was seriously wrong, she thought that the emergency services may think otherwise.

She tried to put the problem out of her mind.

She tried to fall asleep; she'd see if things were any better in the morning.

But she soon realized that that wasn't going to work.

Kunicki was feeling so bizarre that she urged her friend to call for an ambulance. She was rushed straight to the hospital.

She underwent some tests en-route.

Both her blood pressure and heart rate were measured to be far higher than expected, which was a huge concern.

After arriving at the hospital, doctors got to the bottom of what had happened.

She was told that her vigorous stretching session had had unexpected repercussions - she had actually burst an artery in her neck.

This had caused a blood clot to form.

And when it reached Kunicki's brain, it had caused her to have a kind of stroke, and she would need to undergo emergency surgery.

Kunicki was moved to the National Hospital for Neurology and Neurosurgery.

It was here that she underwent a three-hour-long operation, during which the ruptured artery was found.

Her artery was repaired with a stent, and although the clot remains in her brain, it's thought that it will break down over time without any further complications.

However, the repercussions of the accident have been truly frightening.

Kunicki woke from her operation paralyzed on her left side. The physical and emotional implications of this are huge.

"At the start I couldn't move my thumb and forefinger. I could kind of move my wrist up and down. I couldn't lift my arm. I could bend my left leg but I couldn't wiggle my toes." Kunicki told the Daily Mail.

Kunicki explains, "I've recovered movement in my left side. I can walk but not for more than five minutes. I'm really clumsy. I can't do up buttons, I find it too difficult. I can feel hot and cold now but I still feel a bit numb."

She's been flooded with gifts and cards from well-wishers.

Currently, doctors are unwilling to put a time frame on Kunicki's recovery. They're not even sure if she'll ever regain all of her motor skills.

But Kunicki's attitude has been super inspiring.

She told the Daily Mail, "The doctors just say things like 'we're hoping for a full recovery' and won't give an exact time because they don't want to get my hopes up. But I'm determined to get back to work as soon as I can. I just love it."

Her future is still very much up in the air, though.

She's currently back living with her parents in Harrow, but she's eager to get back into her own flat and to work as a paramedic once more.

Her time off work is likely to be costly, though.

In order to help her out, Kunicki's older brother has set up a GoFundMe to help cover the costs of her time off. If you're feeling inspired by this story, you can donate right here!