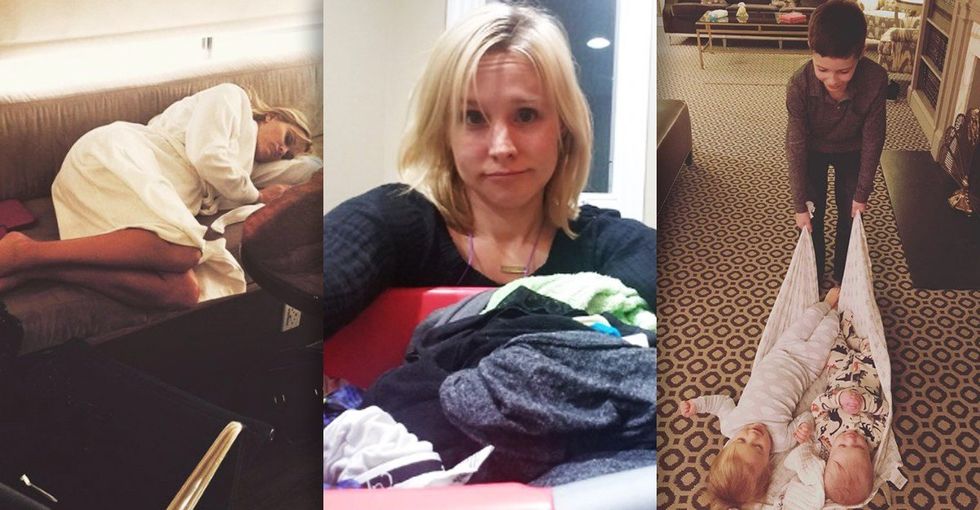 There are millions of fancy parenting books out there, just waiting for new moms to click "add to cart" in hopes of totally nailing this parenting gig. Yet ask any veteran parent and they'll tell you everything you need to know, for free: There's really no way to prepare, so don't even try.

Yes, motherhood is rewarding and fills your heart with love in a million unexpected ways, blah, blah, blah, but one thing it is not is easy, no matter how many books or articles filled with "expert advice" you stress-read right up until the due date. That's basically the number one rule of parenting.

One common (and probably not altogether unfair) assumption, though, is that celebrities are the exception to that rule. How hard can it be to raise your kids when your household staff boasts a nanny, a chauffeur, a team of housekeepers, and somebody in charge of making sure there aren't any stray pieces of crust on your toddler's sandwiches? Well, the fact is that plenty of Hollywood's elite know exactly how un-glamorous motherhood can be, because they choose to parent down here in the trenches with the rest of us — tantrums, toilet LEGOs, and all.

One of the most recent celebrity moms to show herself keeping it real on social media is Drew Barrymore.

Because there are few things more relatable to moms than totally neglecting to comb your hair or pluck your unibrow for weeks on end. Who has time to look in a mirror, anyway? We count ourselves lucky when we get enough time in the bathroom just to pee, so odds are that primping is out of the question.

And then, when a mom finally does have time to get her roots and those face-ipillars handled at the salon?

She takes her daughter with her, because of course. As an extra bonus, though, I've now learned the have-the-stylist-wrap-your-kid's-hair-with-conditioner-to-keep-her-occupied trick! Thank you, Drew. That's a pretty sweet mom move.

Jessica Biel knows all about sharing everything with your kids, too.

Because Lord knows, even if you do get something nice for yourself (like a trip to the spa, or a pair of $900 Manolo Blahniks), kids will be right there to make it their own. That's a pretty pricey dinosaur cave there, kiddo!

The "sharing" of motherhood extends to activities, too, as actress Anna Faris can tell you.

But not sharing your own favorite activities, LOL. Most moms will be quick to point out that their own hobbies and interests got shelved for about eighteen years in favor of...train museums? Yup. Or the same episode of Paw Patrol on endless repeat, or every single verse of "The Wheels On the Bus" each time you get in the car, or whatever activity your kid has chosen as their fave. You just do it, as Faris says, even if it's the 223rd time (that day).

Speaking of sharing, what about germs? Not even holidays are safe, as Busy Philipps points out in this festive post.

"Nothing says Happy Thanksgiving like a trip to ER with a kid who woke up with strep throat," she reported on Instagram. True, and nothing says motherhood like dealing with an infectious disease while you have a house full of people waiting for you to serve them turkey. At least you can skip the fake smile if your face is covered by a surgical mask! All the other holidays are safe though, right? WRONG.

Sarah Michelle Gellar's stash of gift bags is basically every mom's dining room table the day before a class party. After helping their kid stuff tissue paper into bags and painstakingly write 32 classmates' names onto those tiny cards, there isn't a mom alive who hasn't considered homeschooling.

One, being so hugely pregnant that you can't even stand upright long enough for your decaf to reheat in the microwave. Two, having to switch to decaf during pregnancy in the first place. And three, having to reheat your coffee every day because you never have enough uninterrupted minutes in the morning to drink it when it was hot!

Of course, Olivia Wilde realizes (like the rest of us) that things don't get much easier once the baby comes!

Moms learn pretty quickly to take care of daily tasks with a little one in tow, usually toting our new little barnacle around on our hip. But have you ever tried folding a fitted sheet with one arm? Baby carriers and sarong wraps are definitely a new mom's BFFs.

Reese Witherspoon gets really relatable with this photo.

Sure, her coffee table probably costs more than my whole house, but it also has a plate of untouched chicken nuggets on it so, samsies. Obviously though, there's nothing quite so mom-ish as needing a nap wherever you can get it...before you've even had a chance to get dressed for the day.

Of course kids need their naps too, and Selma Blair illustrates what can happen if kids get even a teeny bit cranky.

I swear I can almost hear her son (in my kids' best whine voices) saying, "But I'm tired. Stairs are hard. Did you even bring snacks???" A million dollars says he asked her to carry him right after she snapped this pic. Still need convincing that some stars are just like us?

When someone questions whether or not you do your own laundry, it's time to give credit where credit's due. And credit is definitely due in Bell's laundry room under that "batch of dirtys."

Now behold as Chrissy Teigen, one of the most famously down-to-earth famous moms there is, shows us another staple of motherhood: Humiliation.

We will do anything — ANYTHING — to fend off a tantrum. Yes, including making up silly song and dance routines to entertain them. Don't act like you've never done it!

Kelly Clarkson also proves that anything goes when it comes to keeping your kids entertained and out of your hair.

I've lost many a sheet to the "let's pull each other down the hall on a blanket" game, but I've also gained many minutes to myself because of it. No regrets.

When it's not artwork on the walls (and mirrors, and fridge), Alyson Hannigan points out it'll just show up in your phone.

If we leave our devices sitting around, moms everywhere know we'll be treated to a gallery of about twelve billion ceiling shots and up-close nostril selfies. If it were possible to wear out a delete button on an iPhone, moms would be first to do it. Yes, even celeb moms.

Rachel Zoe's son crashed out in a car seat is soooo every kid.

Instead of carefully cropped and filtered pics of her boy at these (WAY overscheduled — sound familiar?) parties, she shared the snap of him slumped over with his pacifier caught in his shirt. If I know kids, I'm willing to bet he fell asleep like that in the car, at exactly the right time to completely destroy any hope of a normal nap schedule or bedtime.

...you have to admit that sacrificing yourself to the germ pool of a ball pit for the benefit of your kid's happiness is worthy of mentioning. Besides, any mom who knows what's up has a stash of wet wipes in her purse for just such an emergency, er, I mean, occasion.

Speaking of doing things just because your kids want to, remember Pokemon Go?

Debra Messing sure does, because she got dragged into the great outdoors to search for imaginary animae critters in parks and strangers' backyards last summer, just like the rest of us. I'm willing to bet the hashtag #summerdays means something quite different to folks without kids.

Even someone as glam as Kim Kardashian keeps her parenting real.

Sending your kid into a time out is about as relatable as it gets. Of course, I bet those time outs are a little less effective when your daughter's room is so easily turned into a day spa.

Her sister, Kourtney Kardashian, knows some good ways to relax with kids at home, too.

Forget late night parties and red carpet events, even celeb mamas like to spend Friday nights in bed with their brood and a bag of chips. Kids are gonna get crumbs everywhere anyway, might as well Netflix and chill out about it.

But when you do need to leave the house with kids, Olivia Wilde has the look down.

Amber Tamblyn reminds us of another non-glam mom job — scrubbing out your breast pump.

Now, my first thought was, "Uh, there's no danger of someone besides me picking up a dish scrubber at my house." But then I realized this is at Tamblyn's work, and I remembered how very carefully I had to label all my pumped milk in the fridge in the employee lounge at my old job. So, yeah. That's real life, right there.

That's a pretty relatable bathroom situation, but it's January Jones who wins the Most Relatable Toilet contest. And yeah, that's probably a real contest, and if it isn't, it should be.

Because if you haven't found random objects in your toilet, are you really even a parent? It's good to know that celebrities have to fish LEGOs out of the loo, too. As gross as it is, the worst part is that I bet Jones was grateful for this. After all, that's four fewer LEGOs on the floor for her to step on.

This is one thousand percent the look we all have plastered on our exhausted faces at the end of the day. Especially a Wednesday. Because whether you're a Hollywood star or a regular mom watching Access Hollywood, mothers everywhere develop a serious case of the Wednesdays when we realize how far off the weekend is. And that, even when the weekend comes, we're still on mom duty.